Is conflict management sustainable? A closer look at a similar conflict should serve as a stark reminder for all Israelis who care about peace. 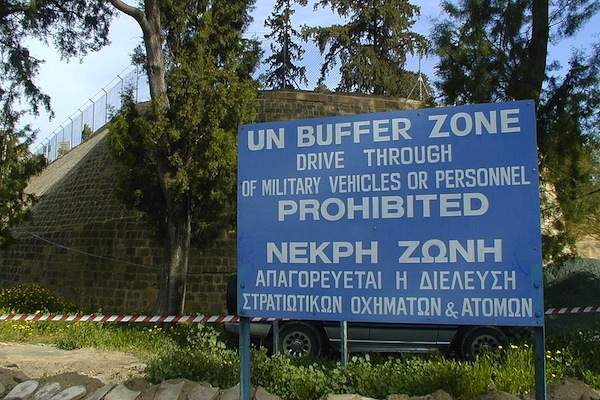 A UN Buffer Zone warning sign on the south (Greek) side of the Ledra Crossing along the Green Line, Nicosia, Cyprus. The other side of the fence is under Turkish control. (Jpatokal/CC BY-SA 3.0)

Living the Israeli-Palestinian conflict day in, day out, one often feels suffocated by a thicket of obstacles to peace. Wherever one looks for solutions, the doors seem to slam shut. It is easy to conclude that no conflict has ever been so stubbornly intractable, and that no one faces so many layers of complexity. What I’ve noticed from years of international work and close observation of other protracted conflicts is that the people in those other places feel just the same.

This year, I began a project at a think tank called Mitvim: The Israeli Institute for Regional Foreign Policies to try and learn more systematically from other conflicts with comparable problems. No two situations are exactly alike, but I firmly believed from my experiences that much can be gained from such comparisons by way of lessons, new thinking, and also warnings. In a recent paper, I focus on our close neighbors, Cyprus, to see what Israelis and Palestinians can learn. Divided since 1974, the leaders of the Turkish Cypriot north and the Greek Cypriot south (Republic of Cyprus) are currently negotiating towards a peace and reunification deal.

Whether they will succeed cannot be known. Still, a close analysis leads me to conclude that conflict management is a poor option — something that Israelis and Palestinians should take to heart. In this interview with Gilad Halpern of TLV1 radio, I discuss the comparison of conflicts generally, and Cyprus in particular, hoping to shed new light on old problems.

Read more:
How thousands of Palestinian and Israeli women are waging peace
The two-state solution is dead. Let’s move on
It’s 2016 — let’s say goodbye to Zionism once and for all