It’s an extreme long shot. Probably impossible. But Tzipi Livni’s comeback may be the only way left to change the balance between the blocs, especially if  she and Labor’s Shelly Yachimovich distance themselves from each other 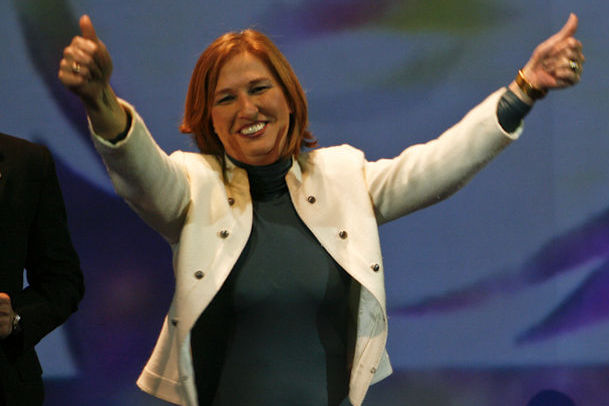 This move, mocked by everyone all over the map, is actually the only chance the Left has. A Hail Mary of sorts.

Right now, and judging by the Haaretz poll published today, it’s a move destined to fail. The gloomy data even says the left-wing bloc is actually shrinking more, and that Livni “only” grabs seven mandates. But there’s something about the Haaretz poll that feels a bit too early, that the polls in the next few weeks might show something else.

As my colleague Noam Sheizaf has pointed out on various occasions, all polls since 2009 show the right-wing bloc led by Netanyahu leading and taking the upcoming elections. The average difference between the blocs has typically been 65-55 in favor of the right. The Haaretz poll from today shows a grim 69-51 for the right.

But there are at least two things that are still dynamic and changing, and could bring about some shifts between the blocs:

1) The results in the Likud primaries – The extreme right-wing party that has emerged after the primaries is a political earthquake. It doesn’t seem these results have really sunk in yet, and this may have not yet been expressed in today’s Haaretz poll.

The liberal, moderate right-wing no longer exists in the Likud. They need to find a new home. Tzipi Livni can offer them that. There are already rumors that Dan Meridor may join her, which could be a considerable push for her efforts to bring other Likudniks over.

2) The map is still changing – two parties, Kadima and Haatzmaut – will be gone in a matter of days or weeks. Ehud Barak’s departure ended the latter, and Shaul Mofaz has shattered the largest party in the Knesset: from 28 seats to only 2, according to Haaretz today. Rabbi Amsalem’s party could be a dark horse – without knowing which bloc he could go to. And let’s not forget that Ehud Omert has yet to decide on his move.

Both Kadima and Haatzmaut  are considered “center” or “center left,” so these aren’t bloc-changers. But they do “clear up” the map of contestants and big names to choose from, which may have some effect on undecided voters.

Labor’s Shelly Yachimovich and Yesh Atid’s Yair Lapid HAVE to display anger over Livni’s move. If they show any kind of satisfaction with Livni’s return, it will only signal a sort of alliance between the three – and that’s not what’s going to bring anyone over from the right. The only way for those depressed Likud liberals to leave home, or for undecided voters to choose left, is if Livni and Yachimovich distance themselves from each other. All that can change after the elections, if needed.

Having said all this, one has to be realistic: It’s a long shot. Extremely long. And the number of seats that need to move over seems to be getting bigger and bigger by the day. But hey, I remember the days before the first debate when Romney never had a chance. Things happen.

I suggest to wait for the next polls, after we see the list of politicians Livni brings to her party and the way the map shapes up. Seven mandates on the first day of a campaign isn’t too shabby. But if the next couple of weeks don’t bring any changes to the blocs – the Bibi-Lieberman government is a done deal.

Related:
Why do Israeli pollsters, media ignore the Palestinians?
Ehud Barak to step down: On his de-evolution, and Israel’s
The Likud presents: The craziest, most radical list ever expected to win elections