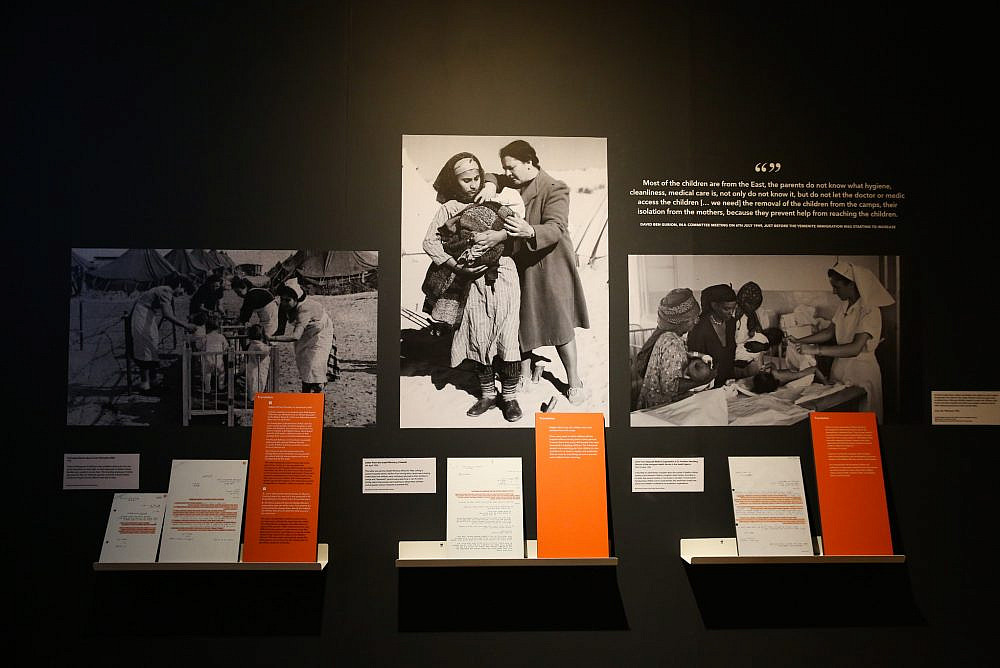 A display at Amram's exhibition on the Yemenite Children Affair in London. (Joanne Rosenthal)

“Assimilation of the [Yemenite] youth children begins before birth,” read the newsletter of Hadassah, the Women’s Zionist Organization of America, in 1935. Written by Jessie Sampter, an American volunteer working in Mandatory Palestine, the newsletter expressed the author’s concerns about the living standards of Yemenites, which she described as “Arab-peasant level,” and for the health of the “neglected and exploited” children. The babies, she wrote, were like “lean little ragged rats”; volunteers from Hadassah and the Women’s International Zionist Organization (WIZO) would therefore approach expectant Yemenite mothers to advise them on how to raise “chubby, bright-eyed, brown babies.”

Sampter’s attitude toward Yemenite mothers and their children was by no means unique among Ashkenazi-dominated diaspora Jewish organizations during this period. The newsletter is one of many documents currently on display in a first-of-its-kind exhibition in London that tells the story of the Yemenite, Mizrahi and Balkan Children Affair — and, in particular, the much overlooked contribution of British and American Zionist organizations in this historic and unresolved tragedy.

Empty Cradles: Israel’s Disappeared Children exposes the mechanisms behind the removal of an estimated 2,400 children from their families without consent during the state’s formative years, at the hands of Israeli medical and welfare authorities in hospitals and transit camps for new immigrants. Their parents, who were recent Jewish immigrants mainly from Yemen but also from the rest of the Middle East, North Africa, and the Balkans, were informed that their child had died, but were never shown a body, a grave, or a death certificate. Evidence in recent years has shown that some of those children declared dead by the authorities were delivered to women’s organizations, which in some cases oversaw their illegal adoption; many of the affected families believe their child was sent abroad in this manner.

The exhibition was curated by Queen Mary University’s Dr. James Eastwood alongside Raz Weiner and Joanne Rosenthal, in collaboration with the Amram Association, an Israeli organization that campaigns on behalf of the families for justice and recognition of the racist roots of the affair. It comes at a time when Amram faces mounting hostility in Israel for its advocacy work, and following the recent exhumation of a child’s grave for DNA testing – the first after a court victory in 2018 that will allow the minority of parents who were given a marked grave for their child after separation to attempt to find some answers. 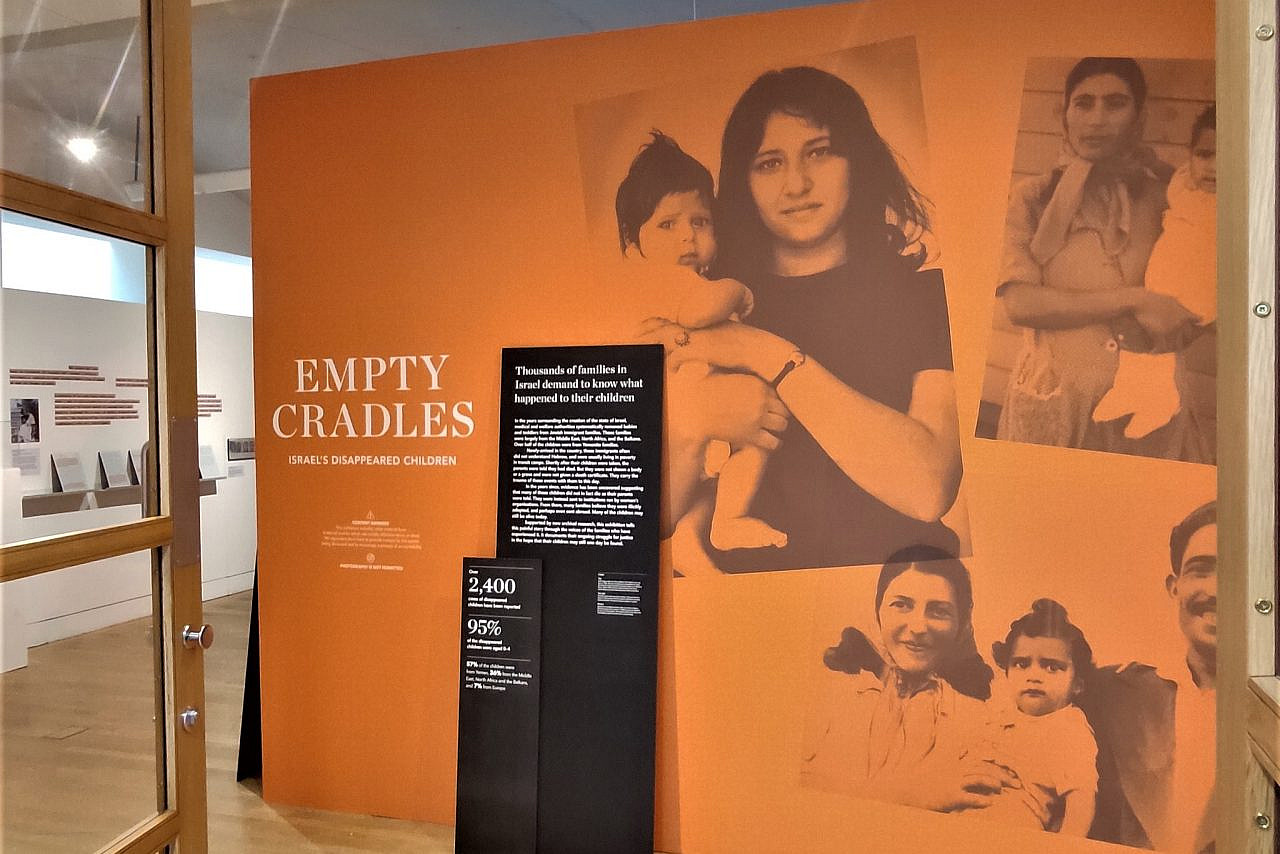 The entrance to Amram’s exhibition on the Yemenite Children Affair in London. (Joanne Rosenthal)

It is striking to see the affair laid out in English, in a language other than Hebrew that dismissed, ridiculed, and relegated it to the status of a closed conversation among “family members” in a proverbial Israeli-Jewish living room. Empty Cradles, however, goes beyond translation, and situates the affair in a global historical context of racist welfare and health policies that resulted in similar historic cases such as Australia’s Stolen Generation, Canada’s Residential Schools and Britain’s working-class children who were sent to the colonies, all in the name of “saving” and “civilizing” them from a perceived sociocultural “inferiority.” In doing so, it dislodges another aspect of Israeli exceptionalism that hovers between a rationalization of the affair as one of administrative errors on the one hand, and outright denial on the other.

The exhibition exposes the paternalistic and racist attitudes of Anglo-Jewish diaspora organizations toward Yemenite Jews in British Palestine and later Israel. A rich display of historical materials produced for an English-speaking audience by U.S. and British Zionist organisations working in Israel showcases how they informed their membership back home of the “civilizing” mission they were undertaking with these communities.

There’s a clip from A Tuft of Grass, a 1951 film produced by the Pioneer Women of America, showing Ashkenazi social workers instructing Yemenite women in hygiene and childcare. The narrator describes her encounters with the Yemenite mothers, who are portrayed as unclean, helpless, and dangerous in their simplicity.

There’s a set of five portrait pictures in a 1949 article titled “The Evolution of a Yemenite in Israel” for the New Palestine, the newspaper of the Zionist Organization of America. The illustration is akin to the March of Progress, only the characters are replaced with Yemenite men at various stages of shedding their traditional attire and side curls.

But perhaps none are more harrowing than WIZO’s fundraising campaign in the Jewish Women’s Review for the Jerusalem Baby Home. Depicting Middle Eastern Jewish children as neglected and abandoned by unfit mothers, the campaign describes Yemenite children as “half orphans.” A text from a WIZO publication mounted on the wall reads: “it has been found better to take the babies to hospital at this early stage than when the families have settled in, as the mothers are still so bewildered by their new conditions that they raise few objections.” 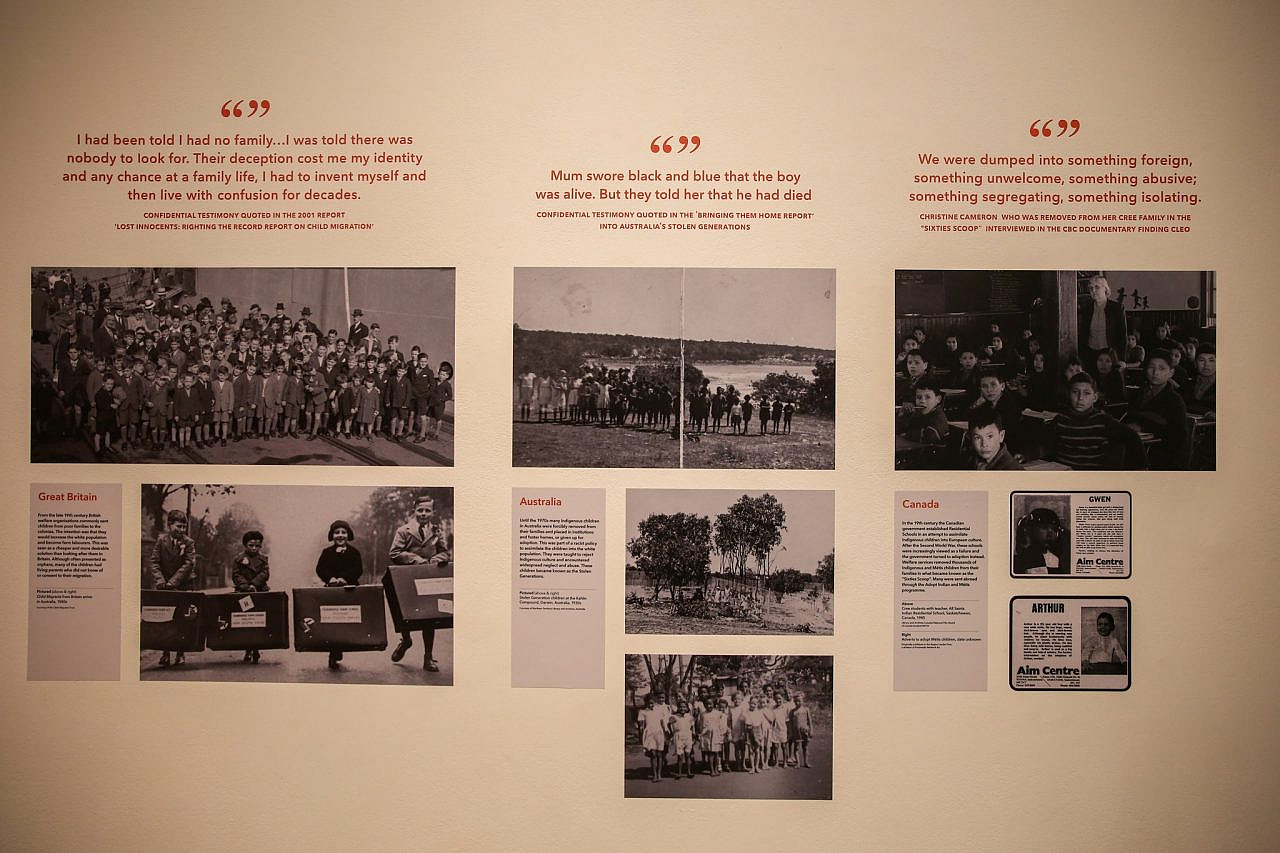 A display at Amram’s exhibition on the Yemenite Children Affair in London. (Joanne Rosenthal)

Baby homes were a common feature of many of the transit camps hosting Jewish immigrants from Yemen and other Arab countries during the state’s early years, and the first step in the removal of children from parents. Children would be taken to a baby home under the pretext that their parents could not provide adequate care, due to their ailing health or substandard sleeping facilities — shoddy huts and tents that the state provided for immigrant families. But in many camps, the separation of child from parent was routine practice regardless of their health.

Once separated, the child would often be transferred from the baby home to a hospital without the knowledge or consent of their parents. Families searching for their child encountered several hurdles — from strict hospital admittance policies to hostile staff providing incorrect information — before eventually being told that their child had died, even if they had been healthy when the parents last saw them.

When medical authorities in hospitals were unwilling and uninterested in returning the children to their parents, they would turn to women’s organisations. As the leading women’s organisation of the time, WIZO would take children into the care of its wide network of baby homes, before often overseeing the adoption process of those children placed in its care at a time when adoption was largely unregulated.

Refusing to be forgotten

Translated archival materials from the 1950s show correspondence among the authorities describing hospital beds filled unnecessarily with healthy children,  and parents searching for their kids. A letter from the Israeli Ministry of Health, dated April 1950, describes how children were not being returned to their families and that people sought to adopt these children. Another, from Hadassah Medical Organization, asserts that the matter is for social workers and women’s organizations: “It is inconceivable that recovered children will continue to occupy beds, simply because their parents cannot be located.”

But locating parents was never a genuine concern for the authorities. Nowhere is this clearer than in the testimony of the former head nurse of the Ein Shemer transit camp, Sonia Millstein, who told the 1995 Kedmi Commission  — one of several investigatory committees established to collect testimonies from the families affected and healthcare workers involved in the affair — that the parents could never have located their child. “I, as a European mother knowing how to follow my child, would have gone searching, asking, and would have found out where my child was. But they [the Yemenite mothers] in their primitive state of mind, I say primitive, they were shocked and needed food and had many children and diseases, and they could not do it.” 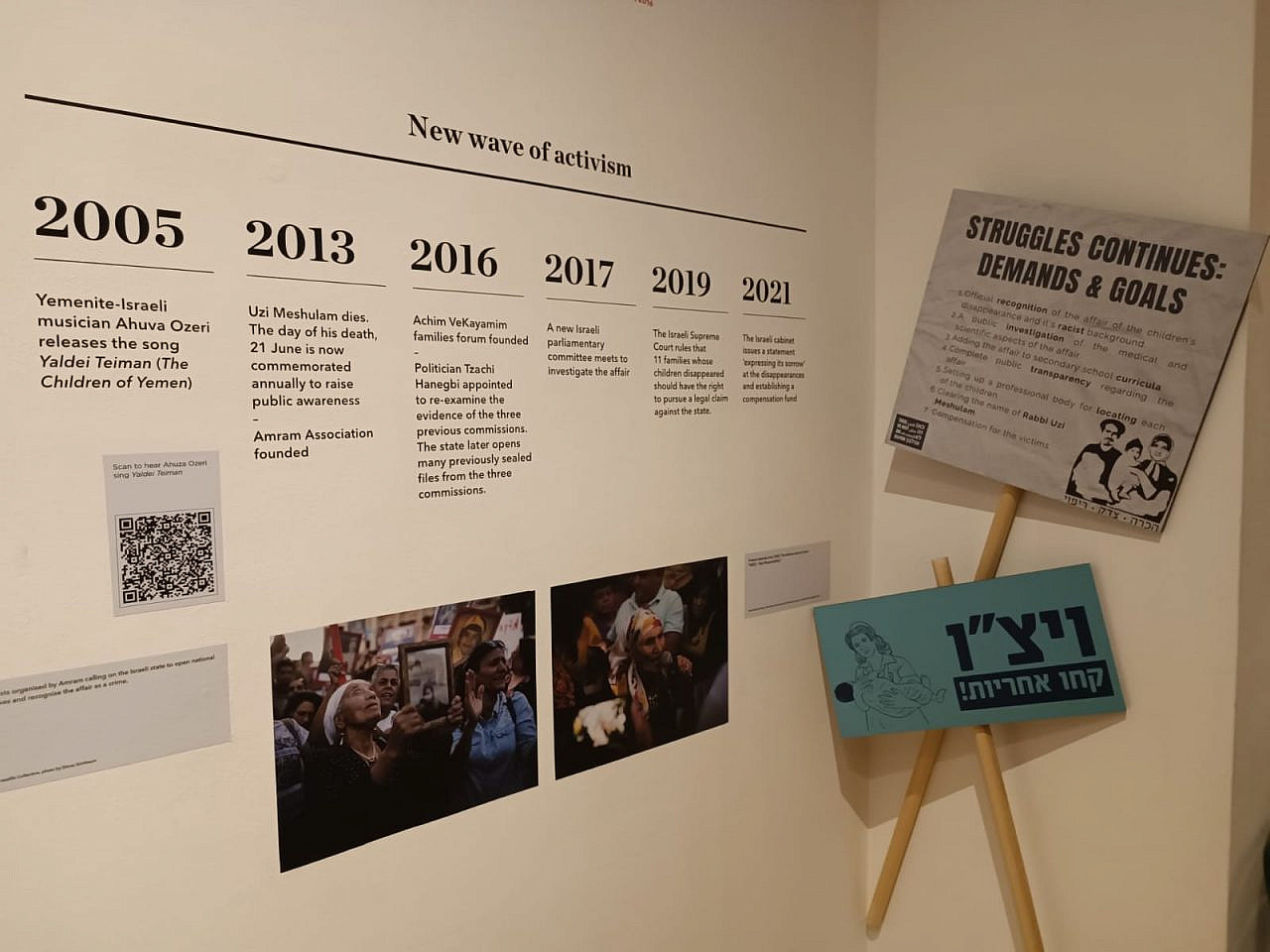 A display at Amram’s exhibition on the Yemenite Children Affair in London. (Joanne Rosenthal)

The excerpt from the transcript of Millstein’s interview to the commission, laid out on the wall, exposes not only the racist and paternalistic mindset that guided the encounter between Israeli authorities and Middle Eastern and North African immigrant families, but also indicates that those in charge were fully aware of the vulnerability of the parents — aware and unwilling to help.

In the words of Prosecutor Nahamani, who was questioning Millstein, “the children were destined to be unidentified” — something that Millstein admits “was the reality.” The quote ends with Millstein’s chilling refusal to respond when asked whether reuniting families with their child was ever a concern for her: “I don’t want to answer this.”

The true number of children handed over to WIZO remains unknown, the relevant files locked away until 2071 by Judge Kedmi who headed the 1995 committee. The state, like the Kedmi Commission, maintains that most of the children died in care, with few unaccounted for. And while the true number may never be known, the effect it has had on the families is clear to see.

In the middle of the exhibition, ringed off in its own small circle, there is a bench that invites you to sit and watch the testimonies of the affected families projected onto a screen, playing on a loop. Elderly mothers and fathers sit in their living rooms, choking up while relaying in heart-rending detail the day their child was ripped from their arms forever. One mother mentions how she became too scared to take her other kids to nursery, fearing they would be kidnapped too; another explains through a breaking voice how she has never stopped praying to see her child again.

Their voices follow you around the exhibition, always in the background, as if refusing to be forgotten or disappeared. Sitting on the bench, I think back to how I first learned of the affair, when my grandpa, sat in our living room, told me in passing how his nephew was kidnapped from hospital. It is fitting that in the center of this exhibition are the personal testimonies of those affected, because what lies at the heart of this tragic affair is a story about families ripped apart by racism, about living rooms made that bit quieter. 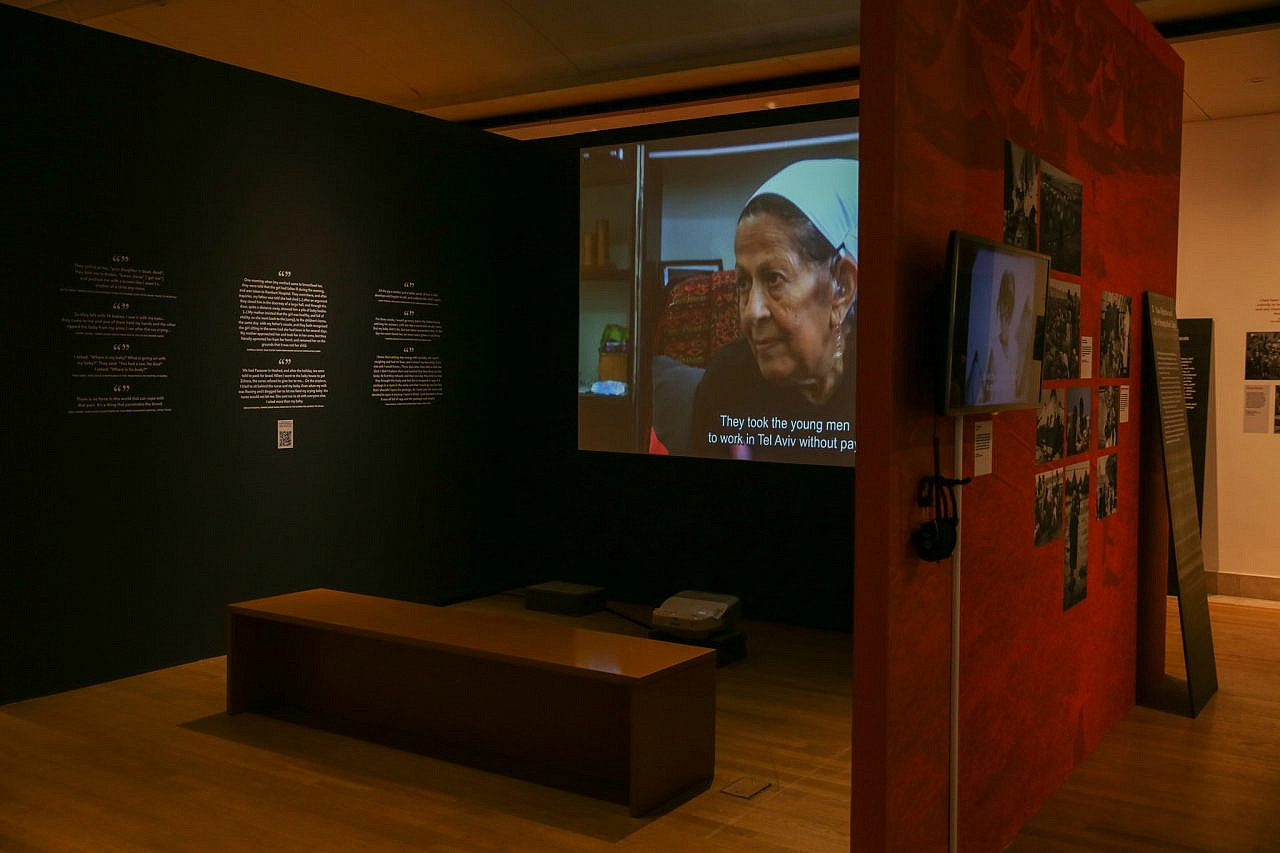 A video shows the testimonies of families affected by the Yemenite Children Affair, at Amram’s exhibition in London. (Joanne Rosenthal)

At the end of the exhibition there is an appeal for more information by the Amram Association. The call for people to come forward is a reminder that this dark episode is far from over, and someone out there might know something — that there is still a chance for siblings, if not their elderly parents, to finally be reunited.

Empty Cradles: Israel’s Disappeared Children is showing at the Brunei Gallery from September 23 until December 10, 2022. Entrance is free.

Leeor Ohayon is a writer and PhD student from London based in Norwich.