The occupation has made us accustomed to things we never thought we’d get used to. This, basically, is the meaning of the weary expression “the occupation corrupts.” News that an IDF soldier is suspected of looting was met by the Israeli media with silence. We’re getting used to looting too, it seems. 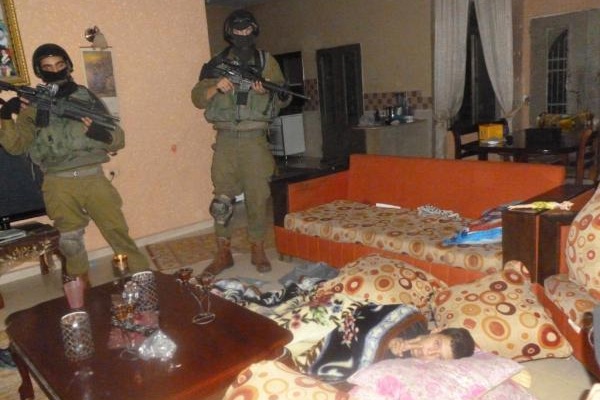 IDF raids a home in Nabi Saleh on November 24, 2011 [illustrative photo] (Photo: Tamimi Press)
Among other issues, Yesh Din’s latest fact sheetreferred to an investigation of suspected looting by IDF soldiers. Here is the testimony of F., a Palestinian woman from a village in the central West Bank, on the manner in which her house was looted:

I went to the children’s room, to wake them up. The soldiers told us to get out onto the street, and wouldn’t let us wear our shoes and coats. At the height of the cold, we went outside without the coats. The little girl, she’s a year and a half old, is sick with the flu. I begged the soldier to leave her here. The soldier said “only she.” I said you can’t leave her alone, he wouldn’t agree and I went out. Once more I ran into the house, two soldiers pushed me down on the stairs; I fell down, got up, and went upstairs. I went to the girl’s bedroom. I saw a soldier standing by the open closet. I knew there was money in the closet, and looked for it. I saw it was gone and I knew it was the soldier who took it. He pushed me and hit me with his rifle. […] I went down to look for the officer and couldn’t find him, and then I saw they arrested one of the sons. […] He’s still detained today. They broke two windows, dropped the computer and broke it too. […]

In the bedroom closet was a [large sum of money, now missing.] The house was messy and dirty with mud. As far as I am concerned, all the damage was predictable. The thing that hurt me most was taking the little children outside, in the cold, and seeing their fear. […] My husband went to work (a taxi driver who drives workers early in the morning) and the soldiers captured him when he left the house, took him to the center of the village where they undressed him and left two soldiers to watch over him. I kept calling him and he wasn’t answering. In the end they brought him back.” The deletions in the text mark information known only to the victim and the culprit, and were removed so as not to harm the chances of prosecution.

After many years of violent conflict, most Israelis have hardened their hearts to the point that they will effortlessly make excuses for just about anything mentioned here. Taking children outside, on a freezing morning, without coats? Who knows what they were hiding in those coats. Leaving a sick, terrified infant without her mother? We can’t know what they would cook up together. Pushing a woman who is old enough to be their mother, until she falls? Well, it’s a stressful situation, the soldiers were stressed. Who knows what danger they were in. Don’t judge them until you’ve walked a mile in their shoes. Assaulting F. with a rifle butt as she was returning home? Look, she went there despite the orders she received, and if we allow just anyone to do that we’d be in danger. The arrest of the son? Surely you don’t suggest they arrest people for no reason.

But here, the excuses end. There are very few people who would be willing to defend the breaking of windows or the destruction of computers. They would support the confiscation of the computer, because you can’t know what sort of dastardly information was stored on it and if it was confiscated it must be for a good reason, etc. But breaking it is senseless violence, and defending it would demand serious loss of humanity.

So, too, in the case of looting. Violence against persons, against women and children in their own house – and make no mistake, breaking into a family’s house is violent in any case – would find plenty of justifications, often fantastical ones. But taking money, the savings of a poor family? For this, unless the eye is blind and the heart is hardened, you won’t find many justifiers.

The IDF’s war tradition, based often on the Bible – this post’s title is taken from the Book of Esther, and it appears just after a major massacre – forbade looting and often punished it severely. IDF tradition tells us that Colonel Uri Ben Ari, the triumphant commander of the 7th Brigade in the Sinai War, was deposed shortly after the war. Ben Ari himself was not implicated in looting, but his driver pillaged a sack of sugar and claimed Ben Ari was aware of it. When Brig. Gen. Aryeh Biro confessed to killing bound Egyptian prisoners of war during that same war, he also said he nearly shot one of his officers whom he caught looting. Even as late as the First Lebanon War, one company commander ordered his troops out of their vehicles prior to returning to Israel, ordered them to give him all their loot, then set it on fire.

The occupation is accompanied by many incidents of looting. The larger ones, of course, are carried out by the full majesty of the state: every building of a settlement, every outpost, every confiscation of structures or land for “operational necessity” which isn’t, is looting. But many, many other incidents are carried out by individual soldiers. Sometimes it is indirect: it is expressed as an adamant demand for a “discount” on the part of a Palestinian merchant (which is why in the 1980s many commanders forbade all dealings between soldiers and Palestinians). Often it was much clearer: a Civil Administration soldier telling the Palestinian whose papers he is examining that his pen is very nice, and the Palestinian passes it over silently. In our case, the crime is anything but silent.

The occupation has made us accustomed to many things we never thought we’d get used to. This, basically, is the meaning of the weary expression “the occupation corrupts.” News that an IDF soldier is suspected of looting was met by the Israeli media with silence. We’re getting used to looting too, it seems.