It’s getting harder and harder for liberal Zionists to reconcile an Israel that legitimizes settler land theft with the values they have been raised to believe the Jewish state stands for. 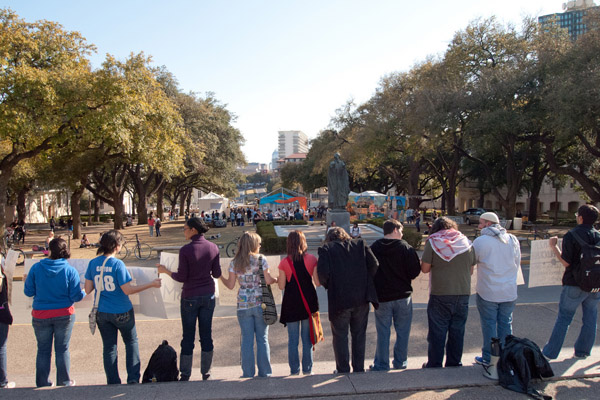 Israel Apartheid Week at the University of Texas, Austin. (Monad68/CC/Flickr)

I’ve been dreading Israel Apartheid Week since I arrived at university in London – a supposed hot-spot for Israel-Palestine tension on campuses. My understanding of what happens each year during Apartheid Week has always been a scene of hate-fueled anti-Israel, pro-BDS, “free Palestine”-chanting protesters, often facing off with equally hate-fueled anti-Palestine, pro-Israel, “Hatikvah” singing counter-protesters.

As a Jew and an anti-occupation Zionist, as someone who sympathizes with some elements of both of these protest groups while being repulsed by others, and as someone who wishes for nothing more than to see a Palestinian state standing peacefully beside the State of Israel, this puts me somewhere bang in the middle.

Or rather it did, until one Monday earlier this month: February 6, 2017. For liberal Zionists, the passage of the “Regularization Law.” retroactively legalizing the theft of privately owned Palestinian land by Jewish settlers, is at best a slap in the face. At worst, it is a fatal stab in the back to the core values supposedly immortalized in Israel’s Declaration of Independence.

Owing to increasingly extremist policies being propagated by increasingly right-wing governments, it has become more and more difficult to reconcile our Zionism with our support for Palestinian aspirations in recent years.

With enormous measures of empathy and nuance, balancing those two things has nevertheless appeared to remain achievable. I’m no longer confident this is the case.

In the days following the passing of the law, President Reuven Rivlin himself warned that “it will cause Israel to be seen as an apartheid state, which it is not.” But liberal Zionists have been saying this for years. Each additional aggressive, indefensible policy emboldens those labeling Israel an apartheid state, while ostracizing those calling for the avoidance of unilateral peace-hindering steps by either side.

I still won’t be supporting Israel Apartheid Week. I think it creates a perception that Israel is a homogeneous population of occupiers, which is unquestionably false. There are Israelis voting for leftist parties that unequivocally oppose occupation, and Israelis actively boycotting settlement products. There are Israelis choosing conscientious objection and prison over army service.

Look beyond the national-religious right, and you’ll see the work of organizations like B’Tselem and Machsom Watch who are documenting and bearing witness to IDF human rights violations. Look at Breaking the Silence who are giving testimonies of their own experiences serving in the occupied territories. Look at Rabbis for Human Rights who are accompanying Palestinian farmers to prevent unlawful harassment by IDF soldiers. And look at Yesh Din who are fighting the very land laws the Israeli government is seeking to extend.

But I will not be supporting the counter-protests either. The Regularization Bill demonstrates how staggeringly powerful the extreme right has become in the Knesset, which is dangerous not only for the Palestinians but also for Israel itself. Israel has long been heading down a path with which increasingly few in the diaspora are comfortable, and the fact remains that Israel cannot survive without international Jewish support. In favor of the support of radical expansionists, the Israeli government is pushing away the very foundations of its existence.

What would it take, I wonder, for liberal Zionists to have no choice but to join the Apartheid Week protests themselves? I fear that the answer will become evident sooner rather than later.

Ben Reiff is a student at the London School of Economics, and a member of the Reform Zionist youth movement, Netzer.