Israel is currently imprisoning over 350 Palestinians and three Jewish Israelis without trial and with no way of defending themselves against charges they often aren’t even allowed to see. As Palestinians demand international intervention, Israeli lawmakers move to codify the practice. 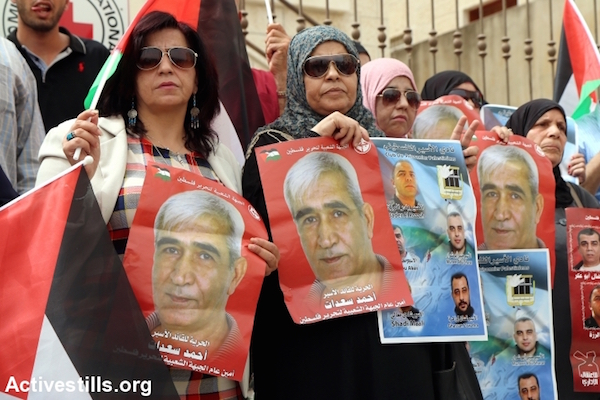 Palestinians protest in front of the ICRC building in Nablus holding photos of loved-ones being held in administrative detention by Israel. The demonstrators were demanding that the ICRC intervene to stop the practice, Nablus, West Bank. September 10, 2015. (Ahmad Al-Bazz/Activestills.org)

Activists in the West Bank city of Nablus on Thursday demanded that the International Committee of the Red Cross (ICRC) intervene on behalf of Palestinians being held by Israel in administrative detention.

Administrative detention is a practice, taken from British Mandate law, which Israel uses to detain Palestinians (and some Jews) without charge or trial — indefinitely.

The practice has been the focus of unusual public attention in recent months. International attention tends to surround Palestinian administrative detainees, mainly including Khader Adnan, Muhammad Allan and Oday Stiti, who won their freedom after staging lengthy and dangerous hunger strikes.

More recently, following the murder of three members of a Palestinian family in the West Bank village of Duma, Israel announced it would start using administrative detention against Jewish terrorism suspects. (I wrote earlier this week about how Israeli authorities are using administrative detention as a substitute for good ol’ fashion police work.) 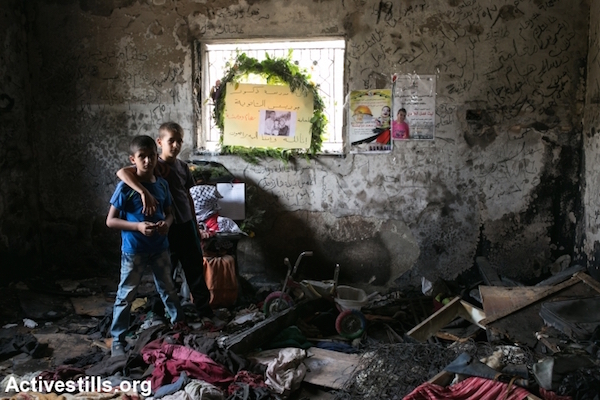 Children inside the burned Dawabsha family home before the funeral of Reham Dawabsha in the West Bank village of Duma, September 7, 2015. Reham was the third family member to die as a result of the July arson attack by suspected Jewish extremists. (Yotam Ronen/Activestills.org) 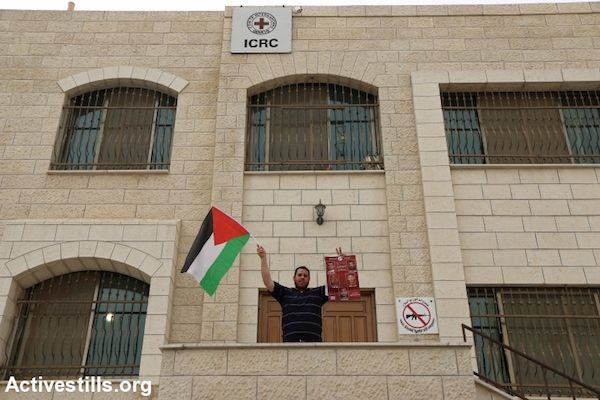 A man raises a Palestinian flag and photos of administrative detainees outside the ICRC building in Nablus during a protest against administrative detention, Nablus, West Bank. September 10, 2015. (Ahmad Al-Bazz/Activestills.org)

The Israeli government is using the Duma murders — and authorities’ difficulty in prosecuting those responsible — in order to push through massive, new anti-terrorism legislation. The draft law, which consecutive governments have been failed to push through the parliament for years, seriously erodes already tenuous civil liberties and due process, and recklessly expands the definition of what constitutes terrorism and who can be classified a terrorist.

In a number of recent high profile cases, Israel has implicitly exposed once again that it is using administrative detention as a first, and not last resort. 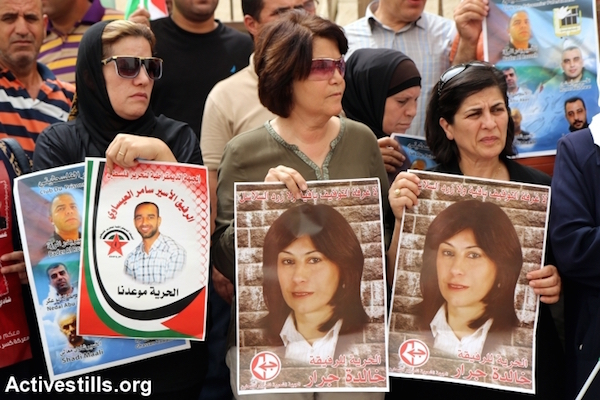 Among the demonstrators in Nablus on Thursday were supporters and family members of Palestinian parliamentarian Khalida Jarrar. The Israeli army arrested Jarrar in her Ramallah-area home in March of this year and placed her under administrative detention a few days later. The accusation against her was that she had failed to comply with a military order exiling her from her hometown.

Because she is a woman, an elected parliamentarian and because of the ludicrously trivial allegations against her, an international pressure campaign was launched, demanding that Israel cancel her administrative detention order. It worked. But instead of releasing Jarrar, the Israeli military prosecutor conjured up an equally ludicrous indictment. Why wasn’t Jarrar charged in the first place? Laziness.

When the military prosecutor finally charged Jarrar in military court, however, the judge did something entirely uncharacteristic of the system in he serves: he ordered Jarrar released on bail. It turns out that the list of 12 farcical charges against her, which largely consist of crimes related to membership in the political party she represents in the Palestinian parliament, did not make her a threat to public safety.

That didn’t fly, however. The prosecution appealed, and won, and Jarrar has remained in jail since. Twice ordered released. Still in prison.

Back in Nablus, a few dozen Palestinians are still hoping that the international community, played here by the ICRC, might intervene against the entire codified system of injustice used to oppress them and deny them even the most basic civil rights.

Unfortunately, with Israel’s hardening nationalist politicians advancing broad new counter-terrorism laws, it appears that those systems of oppression and denial of basic rights are only becoming more mainstream.