In a landslide vote, the United Church of Christ passes a divestment and boycott resolution targeting ‘companies profiting from, or complicit in, human rights violations arising from the occupation.’ 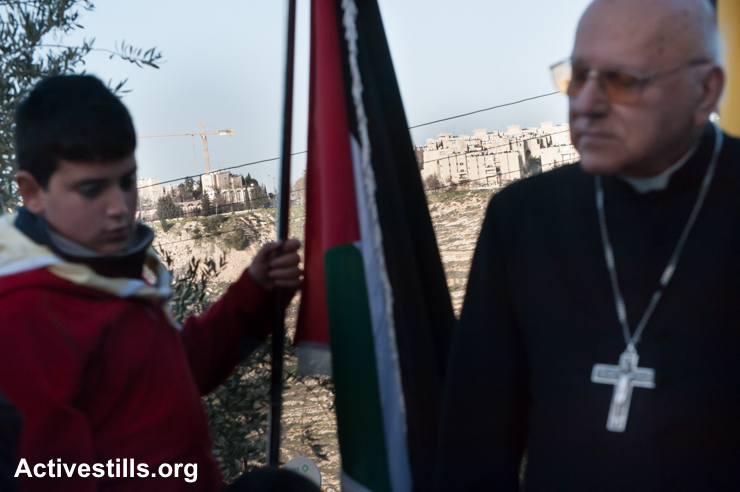 With the Israeli settlement Gilo visible on a nearby hillside, Latin Patriarch Emeritus Michel Sabbah joins Palestinians in a prayer service as a nonviolent witness against the Israeli separation barrier in the West Bank town of Beit Jala, February 8, 2013. (photo: Ryan Rodrick Beiler/Activestills.org)

The United Church of Christ voted by an overwhelming margin Tuesday to divest from companies complicit in the Israeli occupation. The resolution, which passed by a 508 to 124 vote, also calls for a boycott of settlement products, congressional accountability regarding U.S. foreign military aid to Israel, and ongoing commitment to interfaith dialogue.

According to a UCC news report, the resolution, which had initially been limited to five companies for their involvement in occupation activities (Caterpillar, Hewlett-Packard, Motorola, G4S and Veolia), was expanded to include, “any direct or substantive indirect holdings in companies profiting from, or complicit in, human rights violations arising from the occupation.”

“In approving this resolution, the UCC has demonstrated its commitment to justice and equality,” said Rev. Mitri Raheb in a press release from the UCC Palestine Israel Network (UCC PIN). Raheb, pastor of Christmas Lutheran Church in the West Bank town of Bethlehem, had addressed the assembly prior to the vote. “For Palestinians living under occupation or facing systematic discrimination as citizens of Israel, enduring the destruction of their homes and businesses, the theft of their land for settlements, and living under blockade and siege in Gaza, this action sends a strong signal that they are not alone, and that there are churches who still dare to speak truth to power and stand with the oppressed.”

A separate resolution declaring that Israeli policy meets the international legal definition of apartheid won a 312-295 majority but failed to meet the two-thirds majority needed to pass the general assembly.

The UCC joins the Presbyterian Church USA, United Methodist Church, several Quaker bodies, and Mennonite Central Committee among U.S. churches and organizations that are using various forms of economic leverage to protest Israeli policy and to ensure that their investments are not profiting from harm done to Palestinians.

Reaction from major Jewish organizations was swift and predictable, echoing similar denunciations of the PCUSA vote one year ago. According to a statement by Rabbi Noam Marans of the American Jewish Committee, the measure is “one-sided” and “singles out Israel.” The Israel Action Network (IAN) and Jewish Council for Public Affairs (JCPA) issued a joint statement calling it, “deeply skewed,” “divisive,” and supported only by a “sliver of the Jewish community.”

That “sliver” was most vocally represented by Jewish Voice for Peace (JVP), whose Midwest Regional Organizer Ilana Rossoff urged supporters to thank the UCC: “Our opponents will say that divestment harms interfaith relationships—but we know that’s not true. Supporting each other to align our values and actions is the very heart of what interfaith relationships should be.”

JVP has grown to more than 60 chapters over the past year as the only nationwide Jewish organization supporting boycott, divestment and sanctions (BDS) as a means of pressuring Israel.

The Episcopal Church and Mennonite Church USA are also meeting this week, with similar resolutions on their respective agendas. The Episcopal resolutions face more of an uphill battle with direct resistance from outgoing Presiding Bishop Katharine Jefferts Schori. The Mennonite resolution, however, enjoys broad support from key church leaders and agencies that helped to develop it.