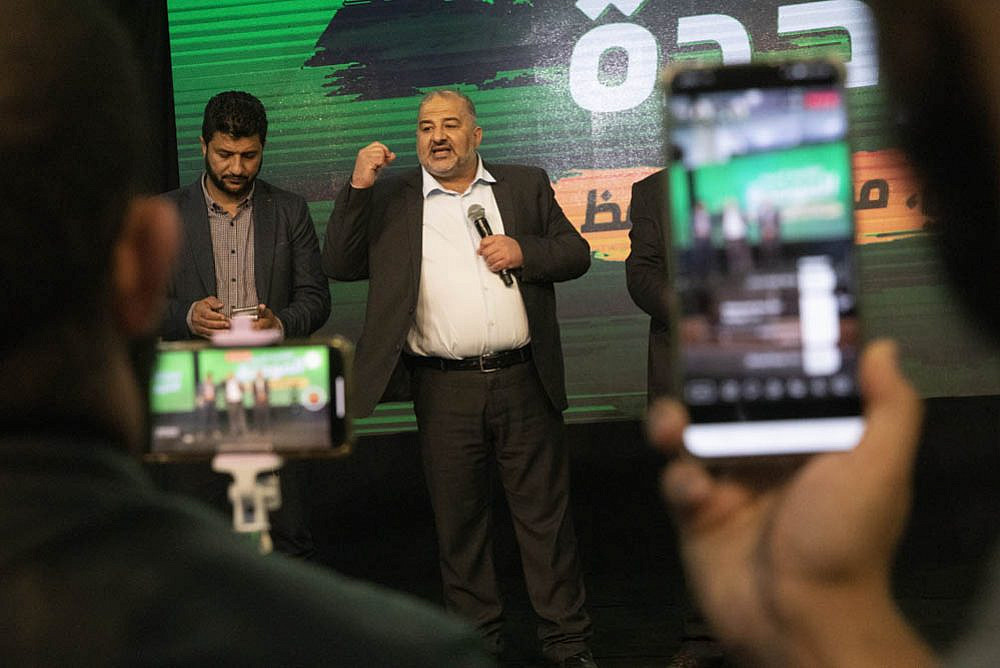 Ra'am leader Mansour Abbas (center) speaks to his supporters on election night in the city of Tamra, March 23, 2021. (Oren Ziv)

A few months ago, the majority of Jewish Israelis had no clue who Mansour Abbas was. The head of the Islamist Ra’am party —  one of the four Palestinian-led factions that had formerly made up the Joint List — largely lived in the shadow of the likes of the List’s Chairman Ayman Odeh and longtime MK Ahmad Tibi, two of the most prominent Palestinian politicians in Israel.

Over the past months, however, the dentist-turned-politician has become a household name. And on Wednesday morning — when it became clear that neither Netanyahu nor his rivals had the numbers to form a coalition after Tuesday’s election — it appeared that Abbas, who is currently projected to win five Knesset seats, may have the power to decide whether Israel will go to a fifth round of elections in two years, or swear in a new government.

The outcome was no stroke of luck; Abbas has been building up to this moment for months. In January, he pushed his Ra’am party to split off from the Joint List; and unlike in previous elections, in which Abbas promoted a moderate political and religious agenda, Ra’am made conservatism a cornerstone of its new political program, including an emphasis on its opposition to LGBTQ rights.

In addition, Abbas re-branded himself as a “pragmatist” by making public overtures to Prime Minister Benjamin Netanyahu and the Israeli right wing based on “mutual interests.” This included Ra’am’s (and the Joint List’s) demand to increase the government budget for addressing the most serious issues plaguing Palestinian society in Israel, including organized crime, gun violence, and housing construction in Arab communities.

The fact that an Islamist leader could become a potential kingmaker in Israeli politics is a paradigm shift that could have radical and long-lasting effects. Yet Abbas’ cunning political maneuvering is far from the only reason for Ra’am’s victory and the crumbling of the Joint List. Here are some of the key factors that have brought us to this moment.

Over the last year, the prime minister has effectively neutralized any credible threat to his rule. Netanyahu’s political future, and his ability to cancel his corruption trial and remain a free man, entirely depend on him retaining power in government. 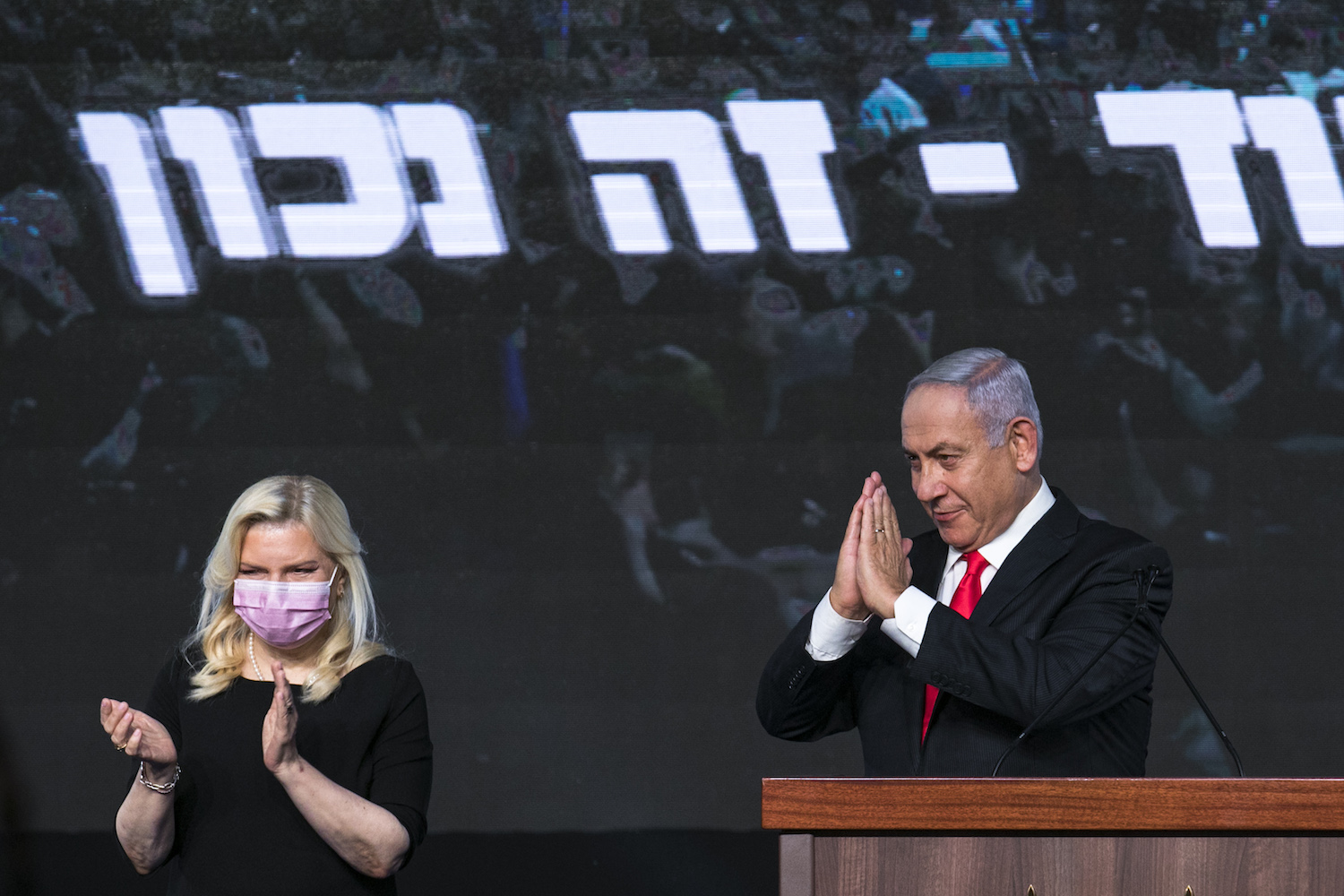 With this in mind, the prime minister successfully divided the leadership of his rivals in the Blue and White party, which last year received 33 Knesset seats (just three fewer than Likud’s 36), by inviting Benny Gantz to join a “unity government” and to supposedly serve as prime minister as part of a rotation deal. Netanyahu simultaneously split the center-left Labor-Gesher-Meretz alliance by ushering Labor’s Amir Peretz into the unity government and later offering Gesher’s Orly Levy a place in the Likud list.

After the Joint List’s unprecedented 15-seat win, Netanyahu knew precisely who to set his sights on next. On the campaign trail these past months, the prime minister toured Arab communities across Israel, boasting about his fight against the COVID-19 pandemic and claiming that his years of racist incitement against Palestinian citizens were simply a misunderstanding.

Less than a week before the elections, Netanyahu went as far as to laughably claim that the Jewish Nation-State Law, which constitutionally enshrines the second-class status of Palestinian citizens, was never actually targeted at Arabs, but rather at African asylum seekers.

Though most Palestinian citizens didn’t buy Netanyahu’s sudden affection for Arabs, many had grown very disillusioned with the Joint List’s inability to make a palpable impact on their everyday lives from the back benches of the opposition.

In the March 2020 elections, Benny Gantz’s Blue and White ran a campaign entirely based on the promise to get rid of Netanyahu. After the opposition parties won a majority of the vote, it finally looked like a new era of Israeli politics was in reach. And when the time came, every faction of the Joint List made the daring decision of recommending Gantz — the former IDF chief of staff who bragged about the number of Palestinians he killed in Gaza — to lead the next government. 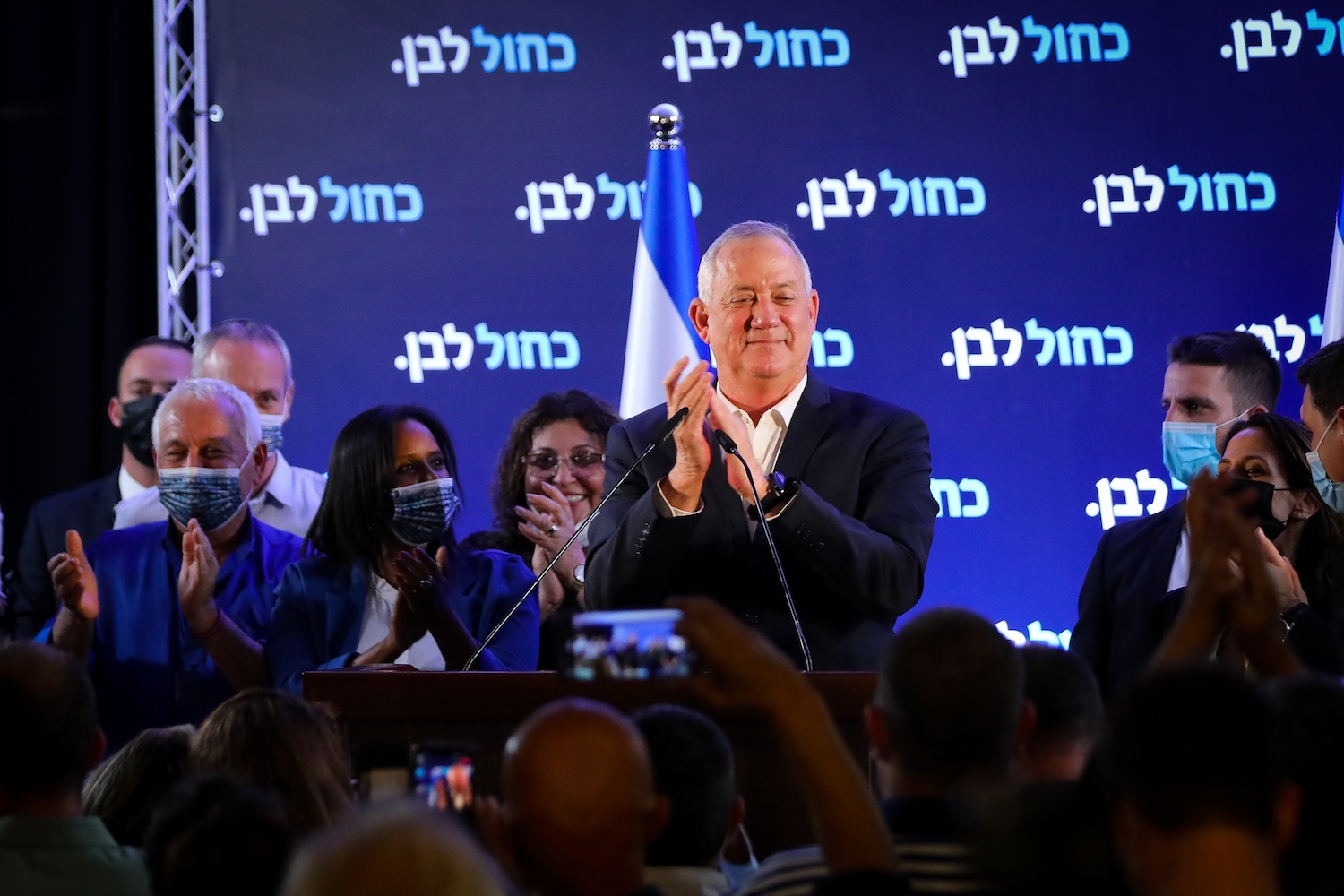 Head of Blue and White Party and Defense Benny Gantz speaks to supporters at his party’s headquarters in Ramat Gan on elections night, March 23, 2021. (Flash90)

But Gantz reneged. Rather than backing some form of Arab-Jewish partnership, Gantz shattered his commitment to his voters and joined the prime minister’s government, partly under the pretext of the COVID-19 pandemic. That decision continues to reverberate a year later. By turning his back on a fifth of Israel’s citizenry, Gantz sent a simple message to Palestinian voters: we don’t care about you.

Glimmers of potential for Arab-Jewish partnership have re-emerged among the Zionist center-left, which seem to have internalized the fact that there is no way of building an opposition to Netanyahu’s right-wing bloc without the support of the Palestinian vote and including Palestinian representatives in their own party lists. Whether that partnership will actually address the politicial needs of Palestinian citizens or bring into question the Jewish privilege endemic in Israeli politics and society is uncertain.

When the Joint List, at the behest of Ayman Odeh, recommended Gantz as prime minister in the last two election rounds (September 2019 and March 2020), it showed that Palestinian citizens were capable of being central players in the Israeli political system. Getting rid of Netanyahu and releasing the bottleneck of Israeli politics, Odeh said, was a top priority for Palestinian citizens in order to have any hope of advancing their community’s agenda.

When that approach failed, Abbas decided it was time to strike out on his own. By making his overtures to Netanyahu, Abbas can easily claim that he is simply copying Odeh — working with anyone who will serve his public’s interest, regardless of whether they incited against them or bragged about killing Palestinians in Gaza. 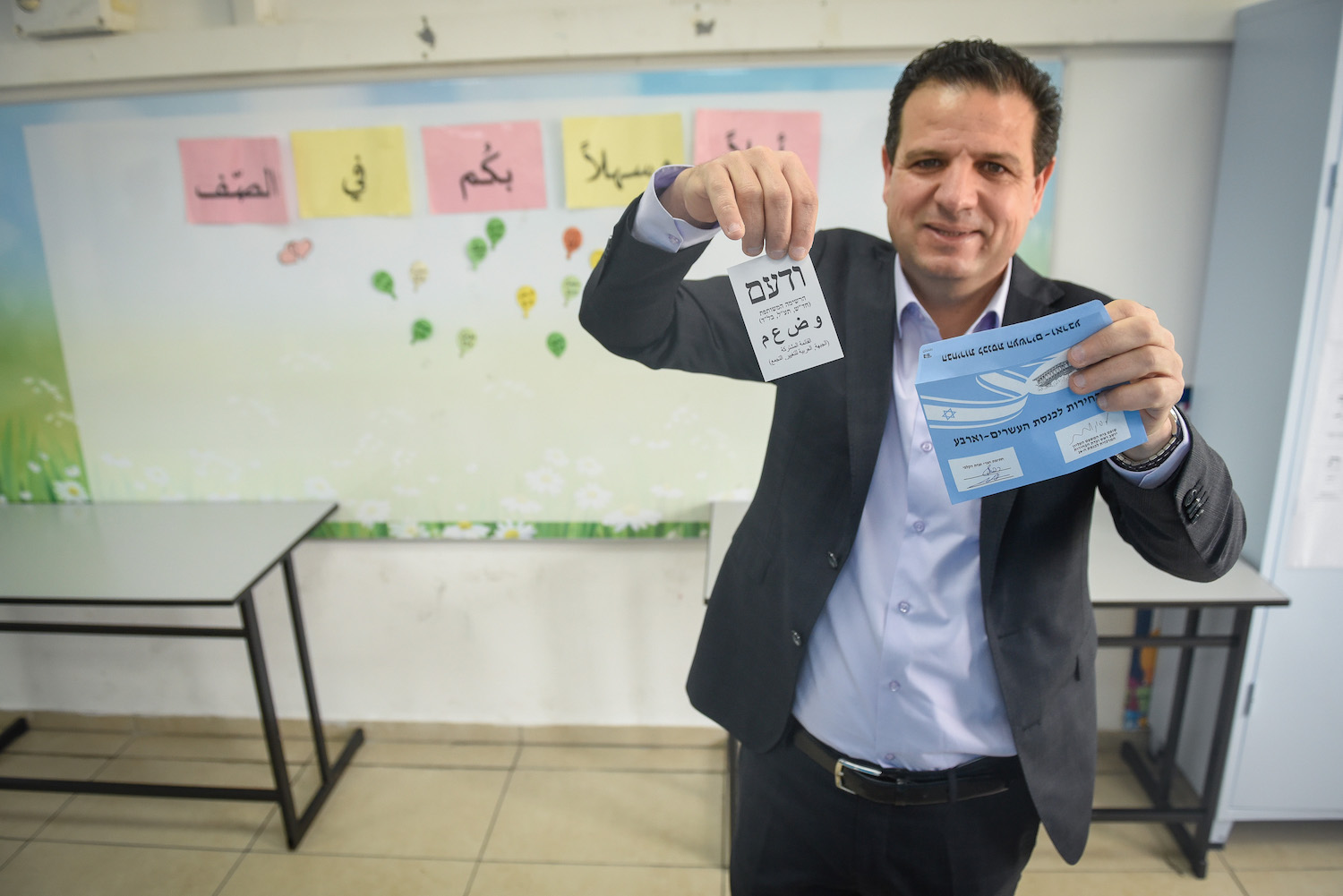 Nonetheless, there is an enormous ideological gulf between the two. Odeh is a left-wing Palestinian who believes in Arab-Jewish partnership, based on a progressive worldview and recognition that the Palestinians in Israel are fighting for both their national and civil rights. Abbas does not particularly care about the Palestinian struggle, and his recent campaign carried an open disdain for progressive issues. While his self-styled image as a “pragmatist” may make him a more versatile candidate, it still involves him abandoning the political principles that have held the Palestinian leadership in Israel for decades.

And yet, Abbas’ new direction thus poses a direct challenge to the Joint List. While the List was struggling to strike up enthusiasm among Palestinian citizens, Abbas became a media darling in Israel’s top news studios, including the pro-Netanyahu Channel 20. Abbas further invited Netanyahu to be a special guest at a meeting of the Knesset Committee to Eliminate Crime in the Arab Sector, where the Islamist leader alloted the prime minister time to address the members. Abbas also has not ruled out supporting laws that would cancel Netanyahu’s current trial. In short, Abbas has opened the door for making Palestinian citizens a key piece of Netanyahu’s ongoing rule.

As Yonit Mozes wrote on Local Call, the past four elections have shown that when there is a political split in the representation of Arab society (such as in the April 2019 elections and again this week), about half of the Palestinian voters are uninterested in participating in the game; when the parties unite, the turnout jumps, as it did in September 2019 and March 2020 (with the List winning 13 and 15 seats, respectively.

This time around, the palpable anger among Palestinian citizens over the breakup of the Joint List led to a drop from 15 Knesset seats to the projected 11 between Ra’am and the List combined. Ra’am was able to mobilize its voters on its own, showing that the List could no longer claim to be the representative of Palestinian citizens in the Knesset.

Should Israel go to yet another election, it won’t be easy for Palestinian leaders in Israel to regain the confidence of their voters. What is certain is that Netanyahu sought to depress the Arab vote by fanning the flames of the fractured Joint List, and he won’t hesitate to do so again should the List ever pose a threat to his political future. 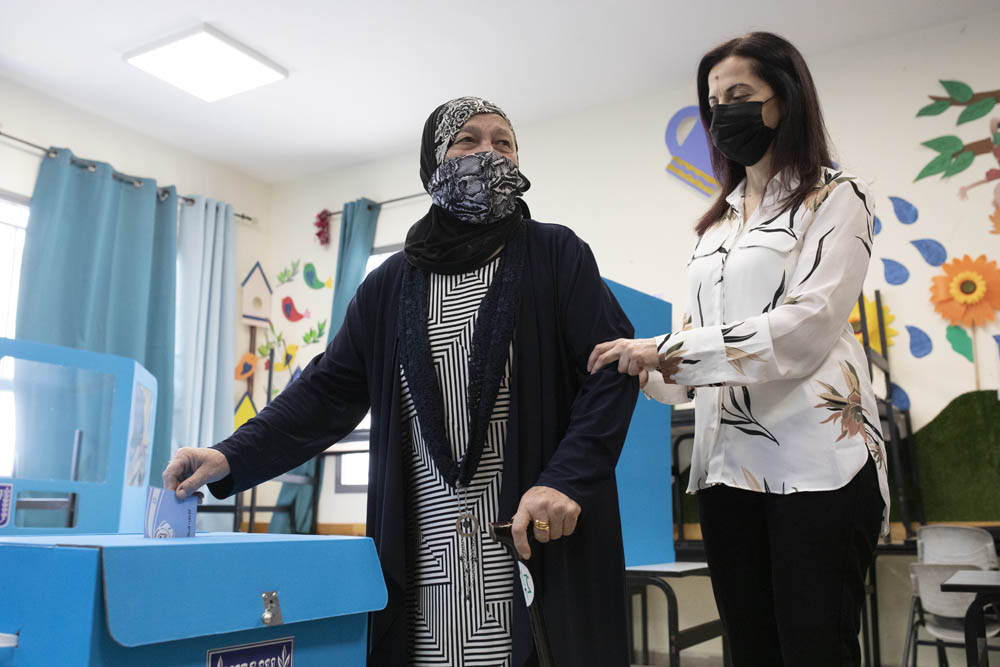 For the moment, there is no guarantee that Netanyahu’s gambit with Abbas will keep him in power, nor that an Abbas-backed government will be able to hold given the far-right Jewish supremacists who need to consent to the alliance.

It is also far too early to know which direction Abbas will take — whether he will support Netanyahu, try to form an “alternative” coalition with Yair Lapid, or take Israel to a fifth election. What is clear, however, is that the fall of the Joint List and the rise of Abbas to the status of potential kingmaker are a reminder that Israeli politics can no longer ignore Palestinian citizens — even if it may end up boosting the right.