‘As a Palestinian expelled from Jaffa to Gaza, as someone whose family and friends have repeatedly been on the receiving end of Israel’s brute force, like all Palestinians, I know that the more violence Israel uses, the more it destroys the very legitimacy it seeks.’ 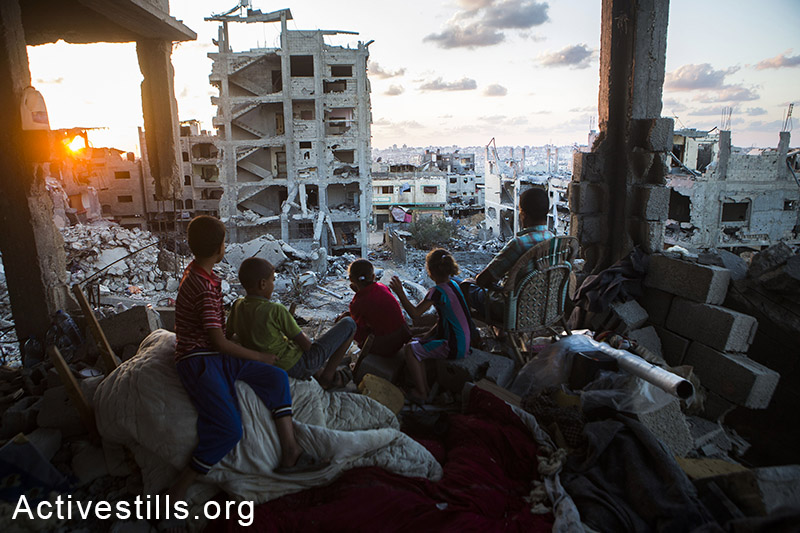 A Palestinian family sits in their destroyed home in a quarter in At-Tuffah district of Gaza city, which was heavily attacked during the 2014 Israeli offensive, Gaza City, September 21, 2014. (Anne Paq/Activestills.org)

Freedom is hard-won, but it should never be the fruit of elimination and devastation. One would assume that these words carry logic – but not for the State of Israel.

The freedom that European Jewish settlers sought in Palestine through the Zionist movement came at the direct expense of Palestinian lives. As they claimed ownership of the newly-conquered land, Palestinians continued to be targets of their oppression, and like all settlers, they feared from the onset that everything they forcibly appropriated would haunt them.

As American anthropologist Ann Stoler has pointed out in much of her work, the resulting chronic anxiety is at the core of any colonial order. This is why settlers preemptively and continually attack and destroy the natives: to appease their paranoia, and to provide a sense of security from those that haunt them. The state masks its anxiety by projecting resilience, writes Stoler, formalizing policies and producing narratives which it uses to govern and coerce.

Benny Gantz, a former army chief vying for prime minister in Israel’s upcoming elections, embodies the legacy of his settler-colonial forbearers. He spent his entire adult life as a soldier in Israel’s occupying army and contributed to the killing of the native populations in Palestine and in Lebanon. Gantz commanded many of those killings in senior positions.

The International Criminal Court is examining potential war crimes committed under Gantz’s command in the Gaza Strip during Israel’s attacks in 2014. One of the worst was approved by Gantz: he activated the Hannibal Protocol to prevent the kidnapping of Israeli soldiers, and ordered the indiscriminate wiping of entire neighborhoods in Rafah on August 1, 2014. Israeli fighter jets, drones, helicopters, and, later, ground forces fired artillery rounds and missiles — including several one-ton bombs — into the area. The number of Palestinian civilian casualties surpassed 135 in this incident alone. Under his command, the Abu Youssef al-Najjar Hospital was also bombed, forcing scores of patients to flee in their hospital gowns.

Additionally, Dutch-Palestinian citizen Ismail Ziada is suing Gantz in a civil court in The Hague for the murder of his 70-year-old mother Muftia Ziada, his three brothers, his sister-in-law, and his 12-year-old nephew in the 2014 bombing of their family house in Al-Bureij refugee camp in the Gaza Strip. 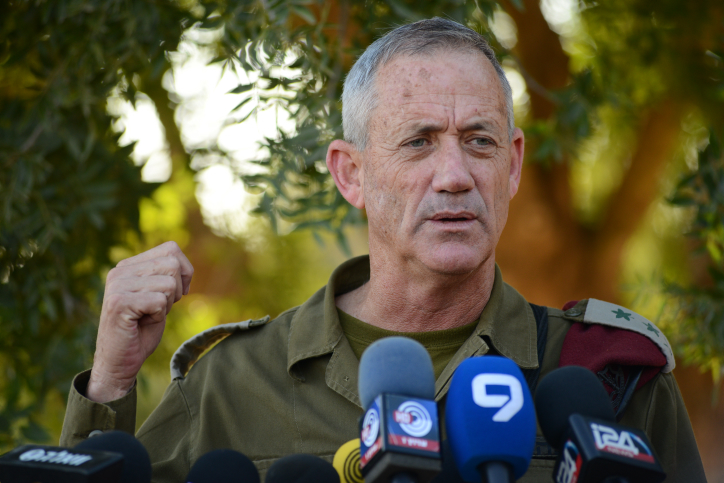 IDF Chief of Staff, Benny Gantz, gives a statement to the media near the Israeli Gaza fence on July 20, 2014. (Mendy Hechtman/Flash90)

Gantz’s election campaign has thus far drawn heavily on this immorality. As if killing hundreds of innocent people wasn’t enough, Gantz needed to brag about them as prized tokens, to suppress the inherent illegitimacy of Israel’s racialized political system and identity. In a series of violent and morbid videos of his military “tokens,” one of which is aerial footage of neighborhoods in Gaza annihilated under Gantz’s command in the 2014 Israeli onslaught, he brags that “parts of Gaza were returned to the Stone Age” and that he killed “1,364 terrorists.” According to B’Tselem, the Israeli army killed 2,202 Palestinians in the 2014 assault on Gaza, including 1,391 civilians of whom 547 were children.

Ironically, Gantz spoke out a few months ago against politicians who were exploiting military attacks for their individual advancement. And, like any self-entitled settler, the footage used for his campaign was allegedly stolen from MediaTown, a Palestinian film production company.

Bragging about the slaughter and dispossession of Palestinians during the Israeli election season is becoming redundant. Gantz isn’t the first one to use the killing of Palestinians as a way to appeal to voters, nor would he be the first general with blood on his hands to lead the country, should he win.

The competition between Israeli candidates, each vying for the award of most hawkish, is no longer about the massacring of Palestinians, but about the lethal scale of it. Most of Israel’s violent practices have already been applied on the Palestinian national body; today, it is the extent of that brutality that matters to Israeli voters. This understanding is shared among Zionist parties across the political spectrum in Israel, with Gantz’s new Israel Resilience Party positioning itself at the center.

Although Israeli political parties will be presenting different programs on economy, housing, welfare, health and education, the assumption that these debates are merely domestic is a mirage. None of these programs can be pursued without the direct dispossession of Palestinians in all facets and forms.

Claiming that the existence of Palestinians – those untamable “neighbors” – is a question of foreign policy is the epitome of Israeli settler-colonialism. Since Palestine is at the core of Israel’s existence, one of Gantz’s first campaign messages was to take pride in the assassination of a Hamas military chief (with whom Israel was reportedly about to sign a long-term truce), the bombing of thousands of homes, and the killing of hundreds of civilians across the Gaza Strip. But the more brute force men like Gantz use against Palestinians, the more entrenched the settler-colonial endeavor becomes.

As a survivor of Gantz’s alleged war crimes, as a Palestinian expelled from Jaffa to Gaza, as someone whose family and friends have repeatedly been on the receiving end of Israel’s brute force, like all Palestinians, I know that the more violence and brutality Israel uses, the more it destroys the very legitimacy and recognition it seeks. We are very much aware of our calamity, inflicted upon us by the invading settlers, without remorse. Yet we also know that these men carry with them the seeds of their own destruction and that of their colonial project.

Hanine Hassan is a PhD candidate at the department of Middle Eastern, Asian and African Studies at Columbia University in New York City.