Mansour Abbas was on top of the world last week after his Islamist Ra’am party defied expectations and was elected to the Knesset. Following the election, Abbas delivered a primetime speech hailed by pundits as historic, in which he declared: “I, Mansour Abbas, a man of the Islamic Movement, am a proud Arab and Muslim, a citizen of the state of Israel who heads the leading, biggest political movement in Arab society, courageously champion a vision of peace, mutual security, partnership, and tolerance between the peoples.”

Extending a hand to the Israeli far right, Abbas seemed to offer a message of partnership: “If we cannot find the way to defeat ignorance and beat racism, we will bequeath to the next generation a complex and dangerous and impossible reality.”

But now, a week after his election victory and months after he made clear that he would sit in a Netanyahu coalition, Abbas’ achievements are coming up against the wall of Jewish supremacy.

Abbas’ hopes to have some kind of influence on the government was based on the idea that he was “neither right nor left.” Therefore — and in contrast to the Joint List — he could serve as a kingmaker and achieve greater victories for his constituents.

But this formula was always a misleading one. Abbas could never really serve as a kingmaker between the “right” and the “left.” After all, had this been the reality, the right would have been able to form a coalition within a day. And yet, a Likud-led right-wing coalition can still be constructed in multiple ways without Abbas’ help.

Abbas, then, could have served as kingmaker not between the right and left, but between the “anyone but Netanyahu” camp and “no one but Bibi” camp. His political strength derived from the fact that he is the one man who can bestow upon Netanyahu the prime ministership, and in return Netanyahu will give Abbas, at least on paper, a list of achievements that he can take home to his voters, including amending the Jewish Nation-State Law, halting home demolitions, and recognizing Bedouin villages in the Naqab/Negev Desert.

Now it turns out that his theory has very little political feasibility. In order to form a government, Netanyahu needs both Abbas and Bezalel Smotrich, a far-right politician who espouses a hyper-nationalist version of Jewish supremacy. I do not know whether Netanyahu misled Abbas and assured him that he would succeed in restraining Smotrich; whether Abbas erred in his understanding of the rigidity of the Israeli right; or that Abbas knew exactly what was going to happen and deliberately misled his voters.

Either way, Smotrich was not convinced by Abbas’ speech and sent him packing. “The Arabs, who will become legitimate partners under the auspices of the right, will most likely join the left,” Smotrich wrote in a Facebook post, in which he explained why he refuses to entertain the idea of even meeting with Abbas, even if it leads to the formation of a right-wing government. The reason is simple, Smotrich explained: the right promises Arab citizens only civil rights, while the left talks about both civil and national rights.

No cards left to play

With Smotrich’s veto, Abbas is now forced to return to the “anyone but Bibi” camp, which has recently rebranded itself as the “camp of change” with no good cards to play. The formation of a “government of change” does not depend solely on him; his four Knesset seats could bring an anti-Netanyahu government to 62 seats, but the five seats won by the Joint List (without the Balad faction, which already announced it will not participate) can bring it to 63. The government can reach the vaunted 61 seats even if only the left-wing Hadash faction of the Joint List supports the government in a vote of confidence. 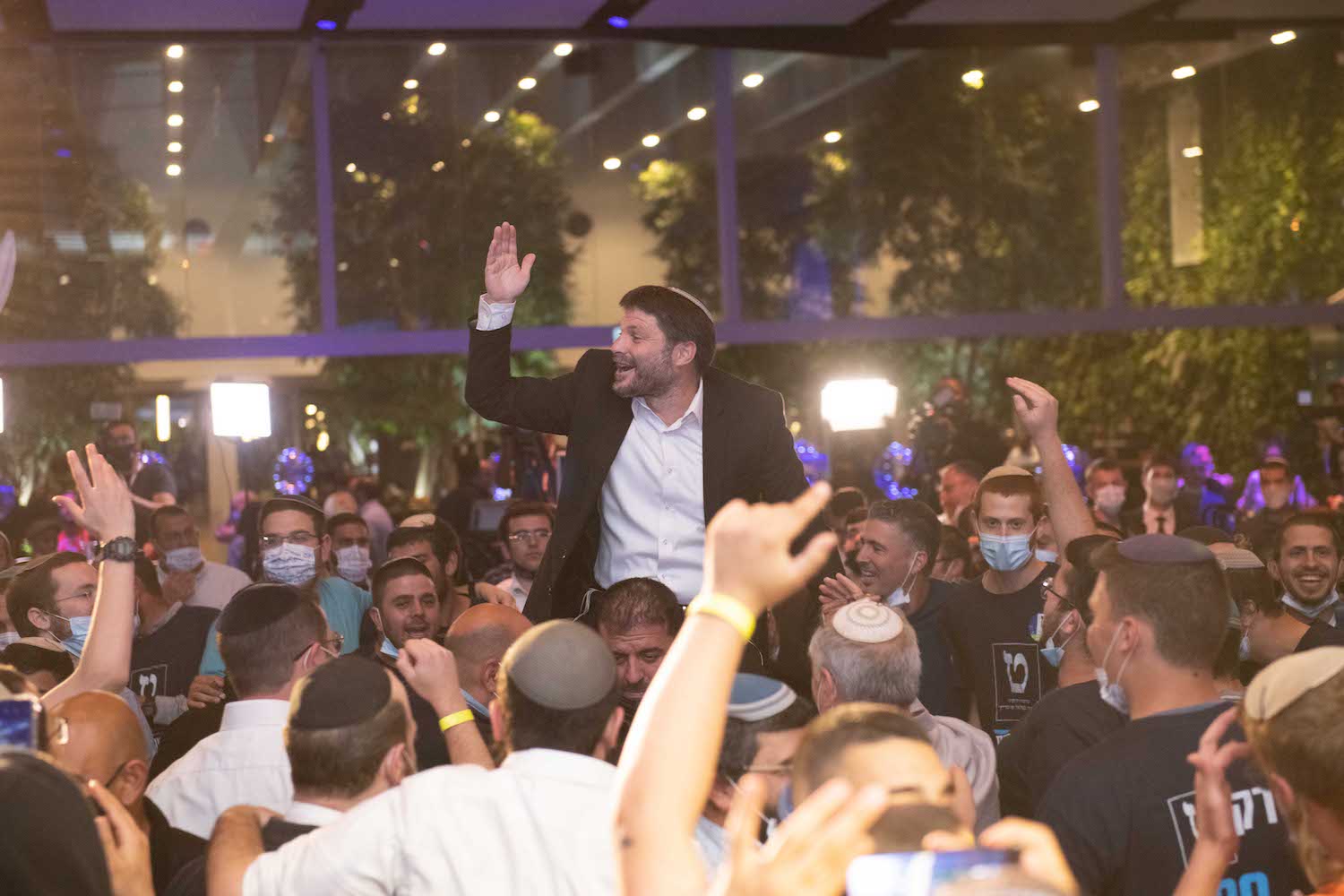 Head of the Religious Zionist Party Bezalel Smotrich is hoisted up by supporters at the party headquarters in Modi’in on election night, March 23, 2021. (Sraya Diamant/Flash90)

If this will be the case, one will have to wonder whether Abbas’ decision to break off from the Joint List in January and run independently was worth it. After all, had he not resigned, there was a reasonable chance that the Joint List would have retained its historic 15 Knesset seats and perhaps even increased its power. If Abbas’ goal was to have influence, then it is clear that he is close to failure.

Even if an anti-Netanyahu coalition does not come into being and Israel goes to a fifth election, it is not clear why any of this would be considered an achievement for Abbas. In fact, the split of the Joint List prevented the possibility — which may have been theoretical but at the very least existed — of forming a government without hardline right wingers such as Gideon Sa’ar and Naftali Bennett.

So yes, Abbas’ symbolic achievement is important. Consciously or unconsciously, he has helped expose the hypocrisy of the prime minister, who was willing to abandon years of anti-Arab and anti-Islamic rhetoric if it meant staying in power, while simultaneously exposing the right wing’s thesis of Jewish supremacy, as laid out so eloquently by Smotrich.

After giving their blessing to the Islamist Ra’am party, it will be difficult for Likud and the ultra-Orthodox parties in Netanyahu’s coalition to oppose bringing Arab parties into the coalition. But it is possible that it won’t be Abbas who benefits from this precedent, but rather the Joint List and all the political currents in Israel, Arab and Jewish, who believe in partnership. Currents that, as Smotrich put it, will promote Arab-Jewish partnership both on the civil and national levels.

A version of this article was first published in Local Call. Read it here.