When it can’t find national consensus for an attack on or “steps” against Iran, pro-Netanyahu newspaper Israel Hayom, makes one up…

Israel Hayom is Israel’s most widely read Hebrew-language newspaper. It is distributed for free on street corners throughout the country and is owned by American businessman Sheldon Adelson, who maintains a cozy relationship with Israeli Prime Minister Benjamin Netanyahu. On Friday the 25th, Israel Hayom ran the following: 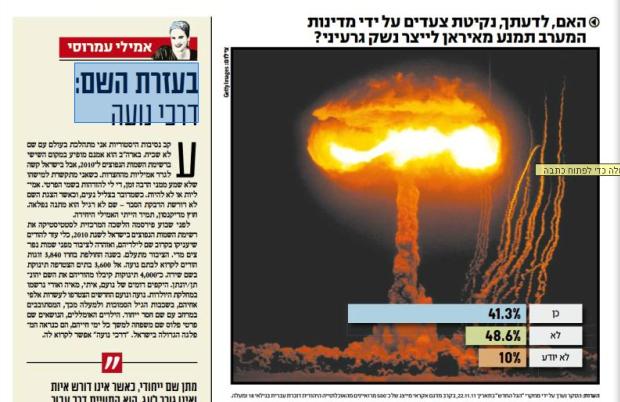 The headline reads: In your opinion, would steps implemented by the Western countries prevent Iran from creating a nuclear weapon?

This question seems, to me, a bit vague. What are the steps? Economic sanctions? A military attack? But the point here is Israel Hayom‘s graphic and the way it seeks to manufacture an appearance of consensus–that is, consensus with Netanyahu and Barak’s hopes to strike Iran.

The results of the survey, below the frightening graphic of a mushroom cloud:

While the majority responded “No,” it is indicated by the short green bar. The long blue bar–blue being a patriotic color in a country where the flag is blue and white–represents those who think that “steps” would prevent Iran from creating a nuclear weapon.

Those who bother reading the numbers will realize, of course, that the bar graph is misleading. But those who simply glance at it might not. Further, the visual of that long, blue bar next to the word yes is powerful, even if one reads the numbers–it creates a feeling of national consensus that “steps” are the way to go when it comes to Iran.

For background and related posts on +972:
Is Israel preparing an assault against Iran? The media is ready
Bloggingheads: Will Israel strike Iran?
Israeli public, politicians split on Iran (with advantage to skeptics)
Finally, Iran plan wakes Israel up to “the Israeli threat”