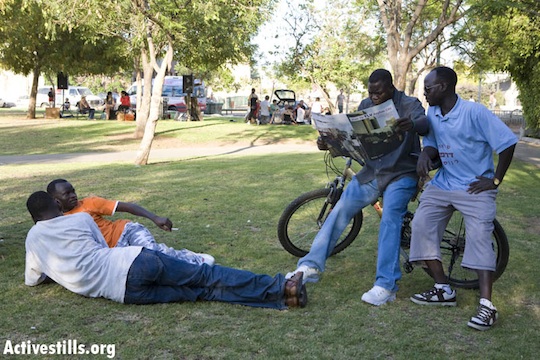 Last week Army Radio reported that real estate agencies in south Tel Aviv are advertising “clean apartments.” According to Army Radio’s web site, a real estate agent said, “we don’t let foreign workers rent the apartments. If there are foreigners, then they’re Nepali or Filipino – normal people.” Whoever listened to the radio broadcast could hear the agent say, “not blacks.” For some unknown reason, those two words were omitted from Army Radio’s report on the web.

Presumably we won’t hear the prime minister, president, or any senior official condemn this phenomenon. Anyone monitoring what is going on here shouldn’t be surprised. If the State of Israel believes that asylum seekers belong in administrative detention in a hot prison in the desert, why wouldn’t it be legitimate for individuals to declare that they won’t rent  apartments to those asylum seekers? If the Interior Ministry insists on a country free of asylum seekers, why shouldn’t real estate agents declare that apartments don’t have “infiltrators.”

In recent months the State of Israel has been abusing asylum seekers in a manner that makes us miss former interior minister Eli Yishai. Yishai the racist was very vocal in expressing his desire to embitter the lives of asylum seekers. But his replacement, who refrains from making dramatic announcements, and the executive branch are advancing a heretofore unknown policy. The state is working hard to advance weapons deals aimed at convincing dictatorships to rid Israel of the unwanted waste currently in the country.

The attorney general, his deputy, and several other aides have been drafting new regulations for the Interior Ministry in recent weeks, including a procedure allowing incarceration without trial for an indefinite period of time for individuals suspected of misdemeanors including stealing telephones or bicycles, or a procedure allowing for the “voluntary return” of asylum seekers (complete free will – a choice between endless rotting in an Israeli prison or the threat of persecution in their country of origin). Those people in the Justice Ministry certainly sleep well at night when they tell themselves that they are just small technicians helping implement the decisions of others, as is customary in these parts.

The notion of clean spaces is not new, and it’s not surprising that it is now being applied to “infiltrators.” One of the candidates for chief rabbi, Shmuel Eliyahu, encouraged people not to rent apartments to Arabs in the past. Even among those who condemned him was someone who already expressed her support for the right of residents of communal settlements to decide that they do not want Arabs living among them, and that municipalities have the right to decide that they do not want children of asylum seekers enrolled in schools within their jurisdiction.