About 4,000 demonstrators gather in central Tel Aviv o commemorate two years since the first tent was erected on Rothschild Boulevard. on July 14, 2011, launching the largest struggle for social justice in Israeli history – aka, the Israeli Summer or J14. 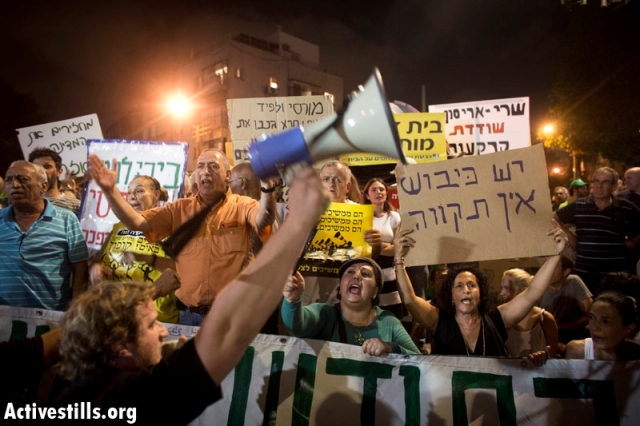 The thousands of demonstrators for social justice marched from Rothschild Boulevard and Habima Square to the corner of Kaplan and Ibn Gvirol, where they were joined by about 200 activists who marched from the poorer Hatikva neighborhood in south Tel Aviv. The second group focused their protest on the demand for social housing. In the combined rally, speakers Daphni Leef, of the original Rothschild encampment, and Charlie Biton, of the Black Panthers, called upon Israelis to reignite the struggle, reject the empty promises of politicians and fight for a just society. Biton stated that we should all learn the lessons of democracy from our neighbors in Egypt, who by the power of the people and their unity, caused the downfall of rulers who did not serve the people. The cenotaph for Moshe Silman, where he set fire to himself a year ago. (Yotam Ronen / Activestills)

Demonstrators also commemorated the death by self-immolation of Moshe Silman in last year’s demonstration. Silman set fire to himself in central Tel Aviv in protest of the maltreatment he received from welfare authorities, and became an immediate symbol of the movement and its first martyr. On Sunday, activists stood in silence for a minute to commemorate him and unveiled a cenotaph in his memory. A firefighting truck was present at the ceremony, probably in fear that another desperate victim of the system would try to repeat Silman’s protest.

After the rally, about 1,000 demonstrators marched on to Ayalon – the central Tel Aviv highway, which protesters have sought to block time after time in recent years. For about an hour they marched on the southbound lanes, unstopped by police, and kept on chanting against the government’s austerity measures and neo-liberal capitalist agenda. 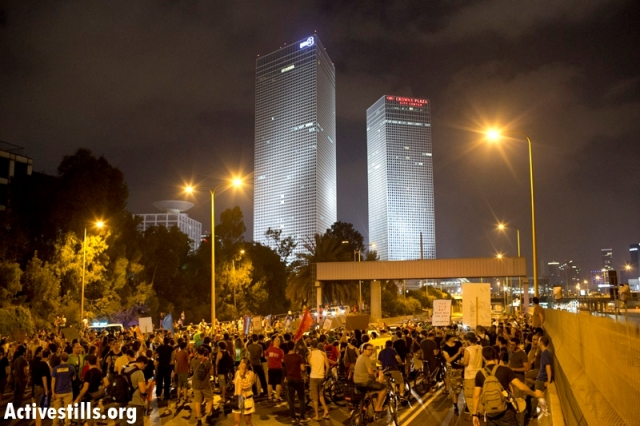 The somewhat minor turnout at Sunday’s rally was a disappointment for activists, who were hoping that recent government plans for cutbacks, the cancelation of social housing and exporting natural gas would cause the masses to return to the streets – as it seemed they would in a powerful demonstration held two months ago. Yet it seems that over the past two years the movement has lost its momentum, and it is unlikely we will soon be witnessing half a million Israelis on the streets as we did at the peak of the 2011 summer protests. Small groups of activists are still organizing weekly vigils outside of Finance Minister Yair Lapid’s home, some have moved into organized labor, while others have devoted themselves to stopping home evictions or joined popular demonstrations in the West Bank – but the disorganized movement as a whole is treading in place, and many estimate that it will not gain public support again until new austerity measures hit the public hard with unemployment and additional increases in the cost of living.