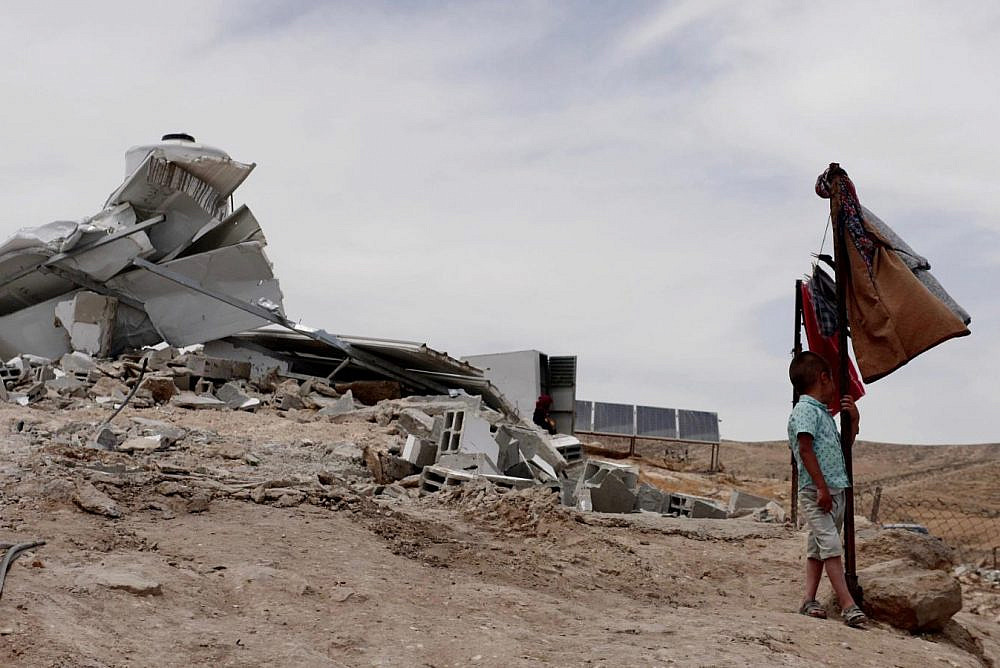 A child stands among the ruins of a house that was demolished in Al-Mirkez, Masafer Yatta, occupied West Bank, May 11, 2022. (Rachel Shor)

Last week, Israel’s High Court authorized, in neat and polished legal language, the expulsion of over 1,000 Palestinian residents from eight villages in the Masafer Yatta region of the occupied West Bank, following a 22-year legal process over the fate of those living inside “Firing Zone 918.” On Wednesday, the Israeli army launched its first eviction operation in the area since the ruling, destroying nine homes in two of those villages, leaving 45 Palestinians homeless.

“Thirteen of us will have to sleep here in a tent,” said Fares al-Najjar, one of those whose home was destroyed. He sat in a plastic chair, watching videos of the house his family lived in being destroyed. Around him, his brothers stretched out ropes, hung tarpaulin, and tried to set up a shelter near the remains of the house. “They sent us back 20 years,” said Fares’ brother Ali, as he tightened a rope to fasten the tent to iron bars.

The tent that the members of the al-Najjar family were setting up as a temporary shelter had until recently served as a pen for their sheep. “We left the flock outside,” Fares said, before turning to the rest of the family and imploring them to hurry — “so that we’ll have time to wash and bring the beds into the tent before it gets dark.”

The bulldozers had arrived in their village of Al-Mirkez, in the South Hebron Hills, earlier that morning. The soldiers allowed only the women to remove the contents of the houses, and a high-ranking army officer from the Civil Administration — the arm of the Israeli military that governs the occupied territories — oversaw the process. The women hauled their families’ personal belongings outside, gathering mattresses, school bags, mirrors, clothes, toiletries, and medical equipment into a pile. 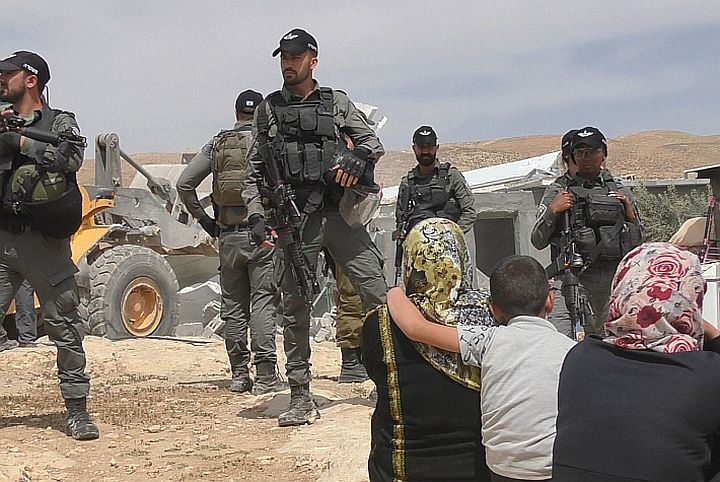 One of the men tried to enter his house, but the officer told him: “Only women can enter.” A teenage girl brought out of her room a piece of paper with some drawings on it. “That’s it,” said the officer. “God will avenge you,” said the girl, as the bulldozer approached and destroyed her home. Then another house was destroyed. And another.

“Onwards,” said the Civil Administration officer, and the bulldozers drove to the neighboring village of Al-Fakheit. There, the bulldozers headed for several of the homes, which were empty of people but full of belongings and furniture. “They are not at home,” said a bearded man, Jaber, whose home has been destroyed five times already.

Some young soldiers wearing green vests and face masks exited a white jeep and began emptying the homes. Some of the soldiers had their faces covered; only the senior officers walked with their backs straight and their faces visible. “That’s it, the High Court [ruling] is done,” said an older Civil Administration inspector. “Now we can get to work.”

Suddenly, we heard screaming; a group of people had come running toward the bulldozers. One of them, Maher, a teacher in a nearby school, had rushed out in the middle of a lesson because he heard that his family’s home was being destroyed. The soldiers told the family to stay back. Then the bulldozer creaked as it descended upon the house and began to crush it, as the family screamed in horror.

The bulldozer then advanced toward a donkey, which was tied to a water tank used by the villagers and slowly blinking beside the destroyed house. One female soldier shouted, “Stop! Someone release the donkey.” The inspector untied the rope, and said “Don’t worry, he’s fine.” He made a signal with his hand, and the bulldozer crushed the house. When it was done, it demolished the village’s water tank. 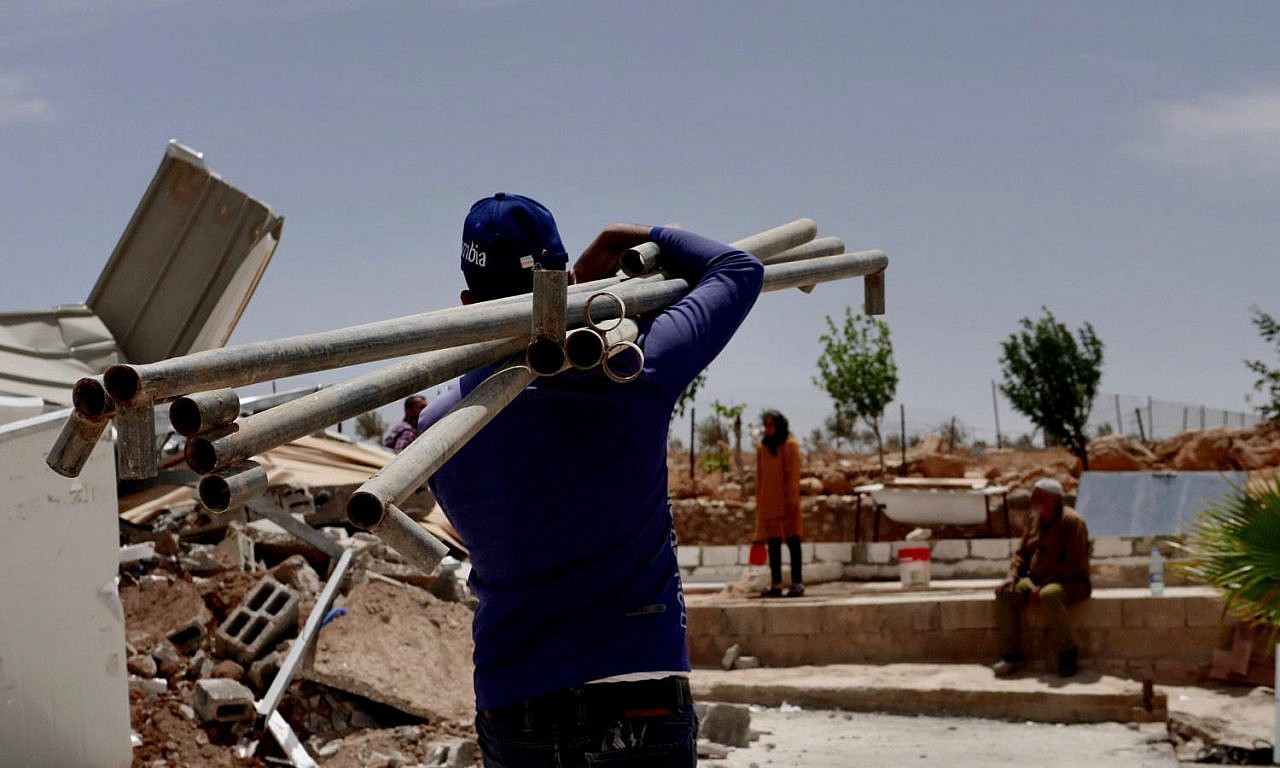 Palestinians clear away the ruins of their homes after they were destroyed by the Israeli army, Al-Mirkez, Masafer Yatta, occupied West Bank, May 11, 2022. (Rachel Shor)

“I’ve never seen such destruction,” said Eid Hathaleen, who has been documenting demolitions like these for years. Eid’s father, Suleiman, was killed in January after being struck by a tow truck contracted by the Israeli police. Other villages said the demolitions yesterday were not dissimilar to those that took place here two months ago.

A total of five living rooms and two sheep sheds were demolished in Al-Mirkez on Wednesday. The al-Najjar family has only their tent left and an ancient cave carved into the rock, in which Fares’ parents lived. “My grandfather’s father, ‘Abd al-Rahman al-Najjar, came to the village in the late 19th century,” Fares said. “There are 10 caves here, which housed 10 families. Most of the people left over the years because of the occupation. We stayed.”

Because of the state’s refusal to issue building permits for the villages of Masafer Yatta, the residents are imprisoned in a torturous game of cat and mouse. “They demolished our house before, in December,” said Ali. “We’d lived there for 10 years.”

Ali explained that when residents receive a demolition order, they pay money to a lawyer who will file an appeal to the courts. This buys them a bit of time, but in the end their appeal is inevitably denied. “And then they come to destroy,” he said.

When this happens, if they rebuild near the same location on their private land, the Civil Administration can come to demolish the house immediately, without the need for a demolition order. That’s what happened on Wednesday: the army destroyed the houses they had rebuilt following the demolitions in December. 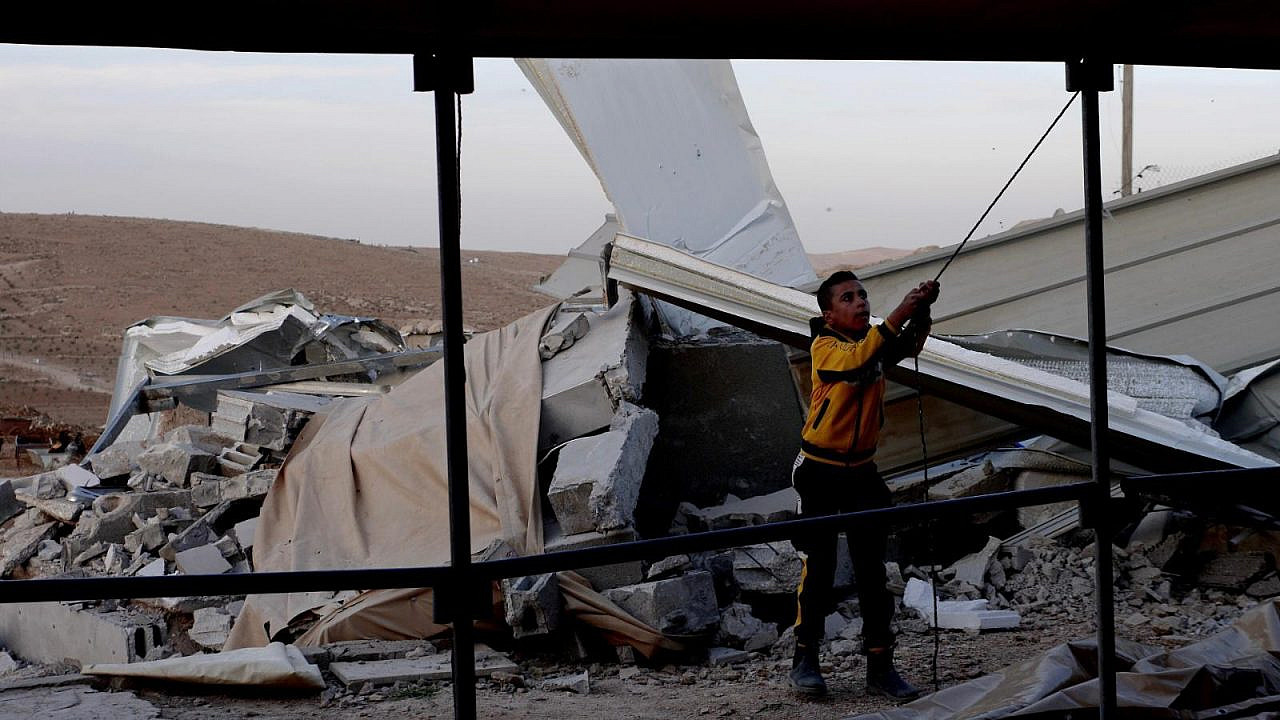 A Palestinian boy erects a temporary shelter alongside the remains of his family’s home that was destroyed by the Israeli army in Al-Mirkez, Masafer Yatta, occupied West Bank, May 11, 2022. (Rachel Shor)

‘They have been persecuting us non-stop’

During the moments of respite, family members gathered to weigh their options: either remain in a tent or try to find enough money to rebuild. “Now it’s summer,” said one of them. “We can stay in the tent until winter.” Fares nodded, saying, “They definitely won’t do anything to us in a tent. We’ll wait until winter. By then, maybe something will have changed — maybe God will take them.”

A few meters away, a 70-year-old woman, Safa al-Najjar, was sitting next to the ruins of the house she lived in with her young daughter. Behind the house was a cave built into the stone, from inside which a child’s voice could be heard. “All my life I’ve been a shepherd,” said Safa. Her voice was a little hoarse, and her smile like a young woman’s. She wore a white head covering with flowers on it and addressed us as “my children.”

“At first, my husband and I lived in this cave,” she said. “It was a bedroom, a living room, and a kitchen all in one. The sheep lived next to us in the other cave. But 20 years ago, when the children grew up, we built a room. Since then, they have been persecuting us non-stop.” The word “they,” which is heard a lot here, always refers to Israel, to the occupiers.

Safa remembers well the deportation that happened here in late 1999, when 700 residents were expelled from the area. A petition was subsequently filed with the Supreme Court, which issued an interim injunction allowing the residents to return to their homes until a final legal decision was made. More than 20 years later, the court decided to dismiss the residents’ appeal. 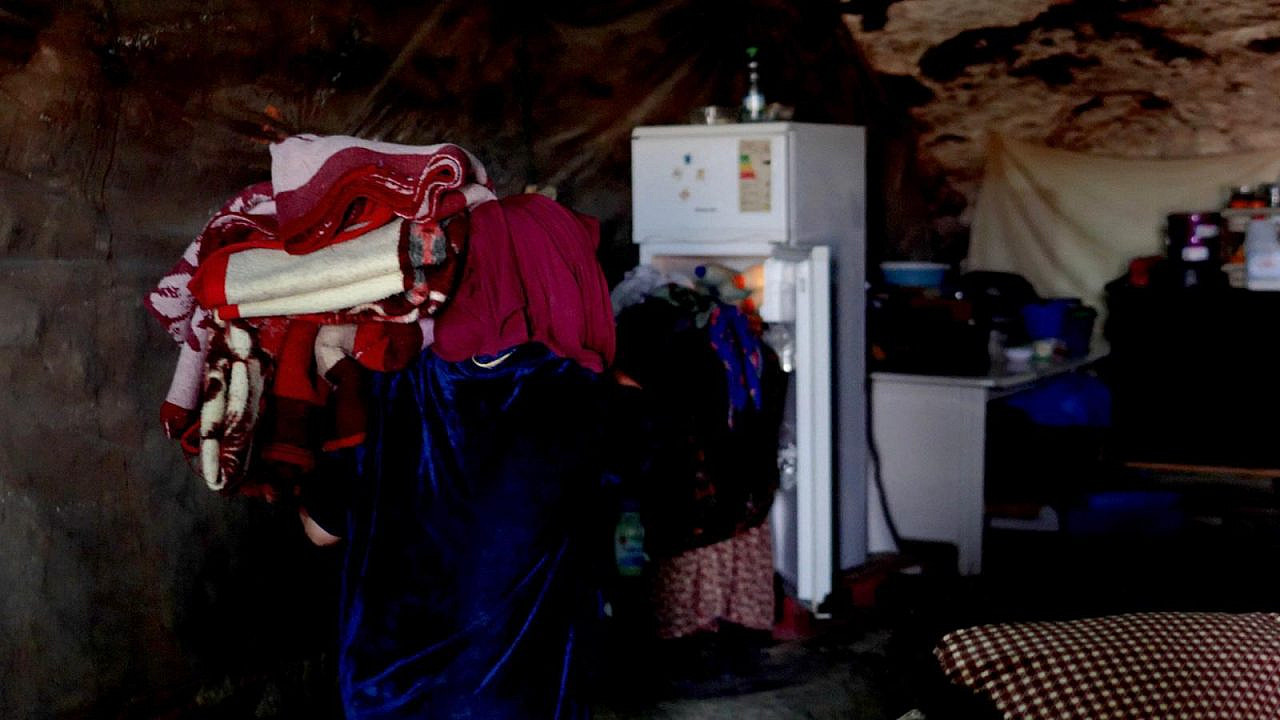 A Palestinian woman moves her belongings into a cave after the Israeli army destroyed several homes in Al-Mirkaz, Masafer Yatta, occupied West Bank, May 11, 2022. (Rachel Shor)

“We were drying cheese outside when they arrived,” says Safa of that fateful morning in 1999. “The soldiers arrived with two large trucks and forced us onto them with all of our belongings. The sheep fled on foot. They threw us out near Susiya,” referring to the village near Masafer Yatta that is also under threat of demolition. We asked Safa whether she had heard about the Supreme Court ruling last week, and she said no. “It’s their court.”

Najati, Safa’s youngest son, actually had heard about the ruling. “The officer told me when he destroyed the house, ‘Why are you building? The court case is over. This is the army’s territory,’” Najati said. “I think what happened today will only get worse, and they’ll put us in trucks again and deport us.”

It is impossible to know whether the military will repeat the act of mass deportation that occurred in 1999, particularly in today’s age of social media and international pressure. What we do know, however, is that a 70-year-old woman will be sleeping on the floor next to the ruins of her home.