Over 12,000 Israelis took to the streets in Tel Aviv and other cities to protest against proposed tax hikes and spending cuts in the state’s new budget. But will the latest iteration of Israel’s social justice protest movement continue? The anger in the streets Saturday may be an indication that the movement will continue and possibly grow.

Back on the streets. It was probably the largest demonstration for social justice and against austerity in the past year, if not since the Israeli ‘Summer of 2011.’ More than 12,000 protestors blocked the streets of central Tel Aviv Saturday night to protest against the government’s proposed new budget. Hundreds also took to the streets in Haifa, Modi’in and Jerusalem, while about 250 others demonstrated outside the Ramat Gan home of Energy and Water Minister Silvan Shalom, demanding that the natural gas found off Israeli shores remains here for local use, and not sold off abroad.

The central demonstration started out on Rothschild Boulevard, the birthplace of 2011’s #J14 movement, and proceeded with great energy through much of central Tel Aviv, ending up back at the same location. There was a feeling of anger in the air, much greater than in 2011, which might indicate that this will not be a one-time event. 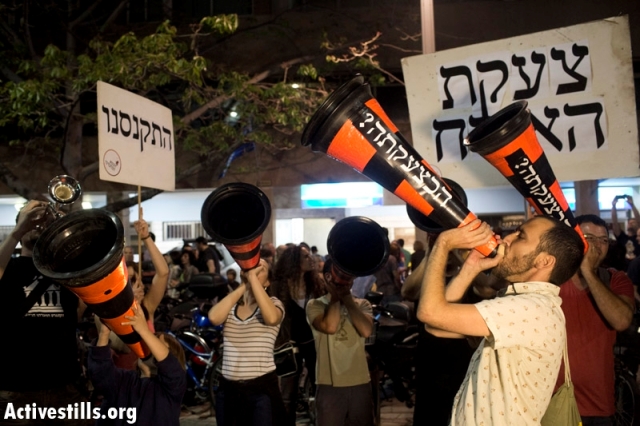 Meanwhile in Ramat Gan, protestors clashed with police and one person was arrested – and then de-arrested by activists. While marching toward the central demonstration, activists also shortly blocked the Ayalon Highway, where police reportedly utilized more violence and used pepper spray on demonstrators. After the two demonstrations were united and the masses began heading home, a group of about 200 people went on to block another road, and were dispersed by police. InHaifa, the windows of a Yesh Atid party branch were smashed. No other irregular events were reported. 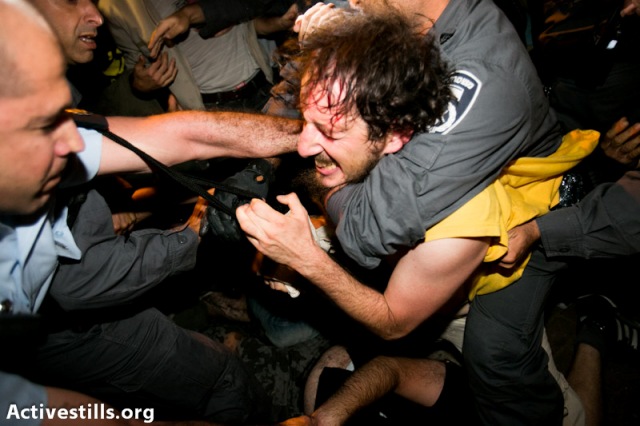 Pushed forward by Finance Minister Yair Lapid, the planned budget carries with an across the board income tax hike for all workers, a cut in child support credits, subsidies, other government expenditures, a postponement of promised salary benefits for public employees (in coordination with the Histadrut labor federation), a new tax on fruits and vegetables and more. While corporate and business taxes are also expected to rise, demonstrators are claiming Lapid has not done enough to take the burden off the middle and lower classes and assert the government should tax the rich more intensely by introducing an inheritance tax, cutting tax benefits to international corporations and other measures. 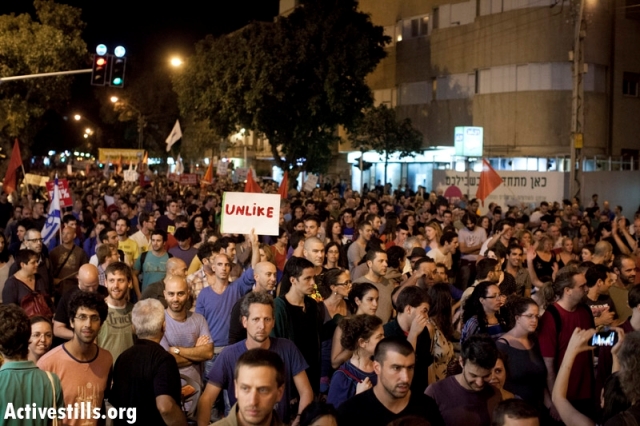 The demonstrations yesterday were attended by several opposition MKs, but while party flags of Hadash, Da’am, Meretz and Labor were visible in the crowd – the large mass of protesters showed up without any demonstrated political alignment. It will be interesting to see what happens next with the #J14 movement: what forms of action it will take (more demonstrations, renewed tent encampments or something completely new), how it will be organized, and if it dares take on the occupation and the regime’s inherent racism – or limit its focus on the social justice struggle for (mainly Jewish) citizens.