A strange historical coincidence had it that on the same day, September 22, 1967 – three months after the Six-Day War, with most of the Israeli public still intoxicated with euphoria – two very different political ads were published in Israeli dailies. One came from the most radical and demonized group in the political fringes, while the other was a product of the most respected members of the elite.

In Yedioth Ahronoth, 57 of the leading cultural figures in Israel signed a petition that read:

The names under this delusional text included some of the oracles of Israeli society, including leading centrist Labor figures, like poet Nathan Alterman and author Haim Guri (a reminder to those who think that the roots of the Israeli colonial messianism are in the religious right). S.Y. Agnon, the only Israeli to win the Nobel Prize for literature, was also among the list of names (*).

The signatories to the Haaretz ad, on the other hand, were completely unknown to the public. Many of them had been members of the radical political party Matzpen, which was established in 1962 by four former members of the Communist Party. In 52 words, they summed up the history of the decades to come. It ain’t no prophesy, just common-sense:

Our right to defend ourselves from annihilation doesn’t give us the right to oppress others. Occupation leads to foreign rule. Foreign rule leads to resistance. Resistance leads to oppression. Oppression leads to terrorism, and counter-terrorism. The victims of terrorism are usually the innocent. Holding onto the occupied territories will make us a nation of murderers and victims (Hebrew: “murderers and those who are being murdered”). Let’s leave the occupied territories now. 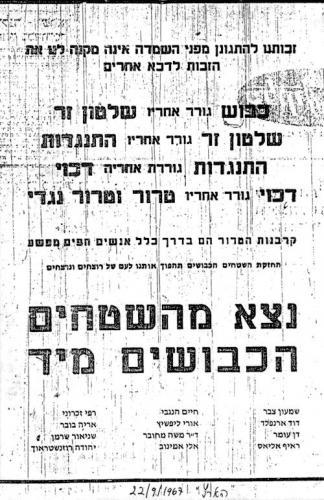