Notorious racist organization Lehava and its leader stage an ugly protest outside the Jerusalem YMCA’s tree-decorating ceremony, against ‘forced conversion,’  and demanding that Christians ‘go back to Europe.’

The irritatingly phallic Jerusalem YMCA tower was decorated especially festively on Sunday. Like every year in the weeks leading up to Christmas, the YMCA held a tree decorating ceremony, to which it invited Jerusalemite children of all faiths — Christian, Muslim and Jewish, along with their families.

During the day there is also a Jewish-Arab preschool on the premises, structured very similarly to Jerusalem’s lone integrated Hebrew-Arabic school. In fact, a significant number of children go on from the YMCA preschool to our school. In many ways, we are one single community.

Like scavengers descending upon a carcass in the desert, Benzi Gopstein (leader of the racist anti-miscegenation group Lehava) and a dozen teenagers gathered outside the YMCA to protest against the “abomination” taking place inside. The police, who knew in advance that Gopstein and friends were planning to show up, were prepared and kept them on the other side of the street, next to the King David Hotel.

And thus, inside the YMCA many dozens of families celebrated and sang together in brotherhood and joy; outside, a sad congregation listened to Gopstein ramble off slogans into a megaphone: “The children of Israel want Hanukah, not fir trees! The children of Israel want to learn ‘Shema Israel’! Don’t send our children to be forcibly converted! Christians, go back to Europe! We don’t want your gifts and candies!”

It seems Lehava’s holy mission is no longer safeguarding the purity of the daughters of Israel from the seduction of Arab men. Its new mission, it seems, is to safeguard the racial purity not only of the family unit, but of the entire country. 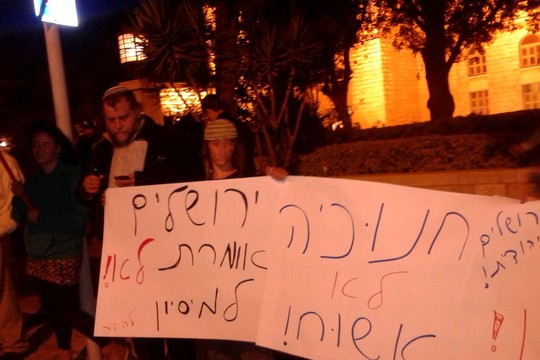 I have to say, it wasn’t one of Gopstein’s more impressive performances. Even the teenage girls in his little gang seemed to be more interested in sitting on the side smoking cigarettes, that is until he gently reprimanded them: “you can take a field trip later, right now we need you here holding signs.”

Even the passersby weren’t very impressed, and a few were even bothered enough to tell them what they thought of him — one so assertively that a plainclothes police officer was forced to intervene and separate the two. Later, radical settler Baruch Marzel joined them, and switched out Gopstein on megaphone duty. The same slanderous slogans, the same poison, the same words.

When the Lehava activists realized that I and another activist were photographing them they became aggressive and demanded that we stop taking photos. Marzel and Gopstein got camera shy, maybe they’re feeling old. And quite amazingly, the two didn’t need to say a single word: their teenage compatriots threw themselves on the line for them, using their bodies to block our cameras as the two heroes of the Israeli Right let their child soldiers do their dirty work.

They came toward us threateningly, walking in lock step, shoving their hands in front of our cameras and faces, slinging at us more disgusting curses than I’ve ever heard, stepping on our feet, trying to push us backward. I don’t really understand why Marzel and Gopstein got so camera shy. Mostly, I don’t understand why those children were willing to be photographed themselves just to protect those two wretched men. But that’s what happened.

That “negotiation” between us lasted for a few good minutes. We photographed a bit more until we understood that our evening had come to an end, so we left. Only once we were a few hundred feet away did we realize that we were both looking over our shoulders to make sure nobody was following us. The teenage minions had been very eager to prove their loyalty to their masters. That scared us.

Where is the mayor of Jerusalem?

At the end of the day I know it was just posturing by some teenagers, even though as a Jerusalemite they revolt me. They know and we know that they are capable of far worse — when they choose to be. Proof of that is on display on a weekly basis in the city’s Zion Square.

They didn’t invest too much in intimidating us, maybe because they weren’t all that interested in getting violent in a crowd made up of families with small children. But they made their presence felt. They made sure to get their message across: “We’re here.” That’s all. A lasting reminder that they are here, making sure that the “other” knows their intentions, making sure nobody forgets.

That dropper full of poison is sprinkling its venom in small doses into Jerusalem these days, drop after drop after drop. Mayor Nir Barkat, meanwhile continues to roll his eyes and ramble on about the multicultural and heterogenous city he is cultivating.

If he actually cared, he could get these fascist thugs off the city’s streets oin a matter of days. If he actually cared, the city would not be continuously humiliated by these venomous gangs trying to threaten Jewish and Arab parents and children gathered to celebrate a festival of light.

But Barkat has his eyes on the national political stage, and it appears the first lesson he learned from the big boys is not to try and pull any weeds. You never know when the snake hiding in the weeds might come back and bite you from behind. Barkat has apparently decided he’s better off not angering the snakes.