A radical, left-wing British-Israeli has shaken up the race for the next president of the U.K.’s Union of Jewish students, and drawn international media attention. Eran Cohen talks BDS, diasporism, and being wounded by unfriendly IDF fire. 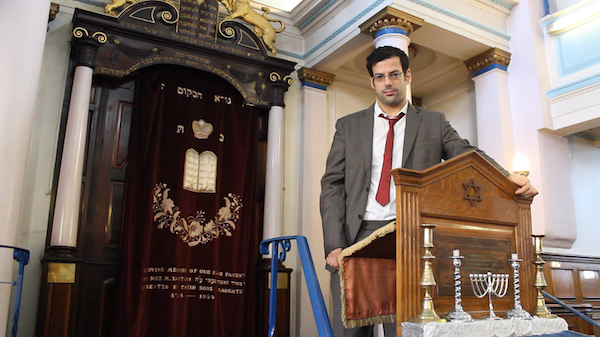 Eran Cohen, who is running for president of the U.K.’s Union of Jewish Students. (Lia Suissa)

The election campaign for president of the U.K.’s Union of Jewish Students is not the kind of story you’d expect to be picked up by the international media. But Eran Cohen, a British-Israeli and a radical leftist, is not your usual kind of candidate, and his campaign has generated headlines in Jewish outlets in the U.S. and Israel.

With political views seemingly at odds with that of the wider British Jewish community — traditionally conservative in its outlook, particularly when it comes to Israel — Cohen may seem like a long-shot for the UJS presidency. He is, after all, a BDS supporter, albeit with a more nuanced take than some reports have suggested, and has participated in anti-occupation demonstrations in the West Bank. But this is 2016, and nothing seems impossible — especially not the collapse of common-sense consensus politics in the face of challenges from the Left and Right.

Moreover, as a U.K. poll released last year shows, there may be fertile ground for at least some of Cohen’s message: fewer Jews are identifying as Zionists, most believe peace with the Palestinians should be Israel’s top priority and three-quarters believe settlements are a major obstacle to such peace.

Perhaps this shifting climate is why the representatives of mainstream Jewry in the U.K. seem to be pulling out all the stops, including lame puns, to stop his insurgent, hilarious meme-fuelled campaign. I spoke to Eran in the final leg of his campaign to talk BDS, diasporism and the state of U.K. Jewish politics.

Can you tell us about yourself?

I’m from Kfar Vitkin, a third generation socialist family, and we emigrated just before the start of the Second Intifada. I came back when I was 18 to do my service in the infamous Anarchistim Neged HaGader [Anarchists Against the Wall] unit where I saw combat. Other people’s combat, but still. In the course of a routine operation I was wounded by unfriendly fire from IDF personnel.

What is the UJS? Is there anything in its history that indicates that it might be a good vehicle for progressive or radical ideas?

The Union of Jewish Students is what it says on the tin, a Union that provides Jewish students with religious, cultural and representational services. It’s the only democratic Jewish organization in the U.K., and while it doesn’t have much history of progressive ideas, that has slowly been changing recently with the attempts at inclusion of LGBT Jewish students and women. We want to bring even more progressive ideas into the UJS by creating a diasporist focus, celebrating Jewish people where they are and fighting for the right of Jews and everyone else to live where they want, neither as oppressor or oppressed.

Why did you decide to run for UJS president?

I’m a member of Jewdas, a diasporist Jewish organization that mercilessly satirizes the Jewish establishment, throws excellent parties and encourages people to take MDMA at shul.

I decided to run after encouragement from a number of non-Zionist and progressive students who felt there is a large minority of Jewish students keen to be part of the community but alienated from it because of uncritical support for Israel and a general disdain for progressive denominations and secular Jews. If you get elected, what do you expect to happen? Are you making any plans for that eventuality?

If we win, we will enter into dialogue with all stakeholders in the Jewish student community to create an environment and mechanisms by which all Jews are able to participate and feel welcomed, regardless of their politics or denomination. While we plan to win, we’ve already achieved our goal of creating a conversation in the community about identity and inclusivity, and have used our platform to highlight important issues like how to deal with increasing racism and rising costs of education. And we made people laugh along the way, which means a lot in 2016.

It does! Your campaign is pretty small-scale, but it seems to be really savvy at using the new language of memes, videos etc. Is that something you decided to focus on deliberately or does it just come naturally? Any advice to other leftists who want to run successful internet campaigns?

Partly it comes naturally as the skillset of the Jewdas crowd. At the end of the day we wanted to have fun and memes are the usual way we have fun on the internet. It was also a conscious strategy, though, because we know that so many Jewish students are so alienated from the mainstream Jewish student community that there is no other way to reach them other than by social media. For example, I recently heard that the cousin of the current UJS president doesn’t care at all about these elections; I think that speaks volumes. My advice to other leftists would be that people like sharing things that make them feel good, and humor is a great way of tapping into that.

How does your campaign look against the more general background of British politics today? In your video you mention being on “first-name terms with Jeremy” Corbyn. I know this was tongue-in-cheek, but do you see your campaign as part of a new resurgence on the Left in Britain? Has the “Center” been discredited in the Jewish community as well?

Well, this is the only political campaign I know of where we mix seriousness and humor; usually people stick with just one or the other. As for Jeremy, everybody assumes I meant Corbyn because I’m left-wing, but actually I was talking about Jeremy Clarkson, the disgraced ex-host of Top Gear.

I suppose we could be seen as part of the wider resurgence, yes. Especially considering how many on the campaign team were also big-time supporters of Corbyn. I don’t know if I can say for certain that the centre is discredited, but the various polarizing events of the last year have definitely pushed many people to take more radical and nuanced positions than before.

You’re a known supporter of B, D & S (Beigels, Dreydls and Socialism), but you’ve also said that if you got elected as UJS president you would not necessarily move to declare the organization’s support for boycotting Israel. Is your position more complex than just for or against BDS, and if so, can you elaborate?

Firstly, the UJS is a democratic organization, with a conference that decides union policy and is open to all members. While I run on an explicit platform, I don’t believe that winning should give me full authority to do what I want, so I will aim to strike a balance between what conference mandates me to do and what the electorate mandated me to do. When there are clear contradictions between the two, I would of course give conference more weight than voters.

I don’t know if I support full BDS. More specifically, I am unclear on some aspects of the academic boycott. For example, while it’s clear that departments of the Technion developing remote-control killing machines deserve to be boycotted, I’m not sure how I feel about boycotting the Hebrew University Medical Center where medical research is being conducted to help Palestinian patients suffering from genetic diseases. So on this particular form of BDS I am undecided.

Matan Kaminer is an Israeli political activist and a PhD student in anthropology at the University of Michigan.