Youth from the village of Qaddum were shocked to find themselves featured on a threatening IDF poster. Will the army severely punish those responsible? 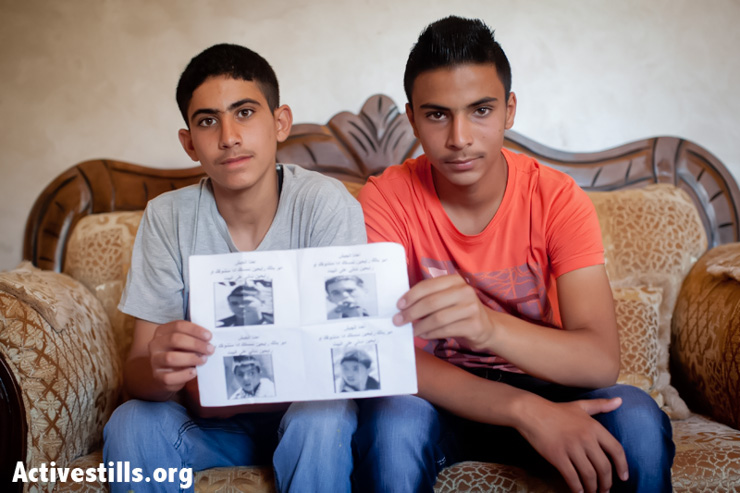 Two Palestinian boys age 14 and 15 hold a poster with their own photos on it with Arabic writing that reads: “We are the army. Be careful, we will arrest you if we see you, or come to your home.” (Photo by: Shiraz Grinbaum/Activestills.org)

About two weeks ago, several youth from the village of Qaddum were shocked to discover their photos and names appear on a placard posted near the mosque, which presented the following threat: “We are the army, dir balaq, we’ll catch you should we see you, or we’ll come to your house.” The affair was exposed in the +972. The placard was written in bad Arabic. “Dir Balaq” is roughly translated as “be careful.”

According to the testimonies of Qaddum’s residents, three IDF jeeps stopped next to the mosque in the late morning of Friday, May 31. Ten soldiers or more disembarked, and began posting the placards. A, a 16-year-old high school student, told a Yesh Din investigator that “I was shocked by seeing my picture and the threat against me. I panicked and now I am always afraid the army will capture me. My brothers are also scared and my mom cries. I can’t sleep. I haven’t returned to school since it happened and I’ve missed a final exam.”

A’s father, M., told Yesh Din, “I was shocked and stressed… I was fearful for the child and was afraid of his reactions. This is a worrying story. I saw my child shivering in fear. He entered a hard and restless state, and finds it hard to fall asleep. He also hasn’t gone to school since.” M. angrily added that “this is an act of terrorism, not the act of an organized army. This is the work of gangs, not of a democratic country. What do you mean, you turn a 15-and-a-half-year-old child into a wanted man?”

D., another of the minors mentioned in our brave lads’ placard, told Yesh Din, “I began shivering in fear and feared they would come right away to take me. The next day, I didn’t return to school even though there was a final exam. I hope the school will show consideration. I live in fear they will come and take me.”

The two minors asserted that they do not participate in demonstrations. A. said he had no idea how the soldiers found his photo, adding they often drive around the village, taking pictures. D. suggested they may have lifted his photo from a request for a magnetic ID card he submitted.

The threats made by the soldiers are perfectly credible. The IDF has developed a habit of raiding houses during the night in order to arrest minors for negligible offenses. Anyone suspected of throwing stones gets the treatment normally reserved for particularly dangerous criminals: an assault by heavily armed masked men on his house at night. B’Tselem published a report some two years ago detailing the routine of child detention: Violence during interrogation, avoidance of the legal duty to have an adult known to the child present during the interrogation, remand until the end of proceedings, a legal system that transcribes statements in a language unknown to the interrogated minor.

Furthermore, these actions are not coincidental: they are a part of a long and calculated campaign by the IDF intended to break popular resistance. The IDF makes it clear to the villages opposing the occupation that they will pay a price, not during the demonstrations themselves – where the media and international activists are present – but at night when they are alone, without the protection of the “IDF’s Kryptonite,” cameras. For two years now, Qaddum has held demonstrations every Friday in protest of the closure of the road leading from the village to Road 60. The IDF responds to the demonstration with its customary violence: CS gas grenades, stun grenades, spraying the demonstrators with putrid fluids (“Skunk”) and assaults against demonstrators with dogs have also been also documented. In days when there are no demonstrations, the army enters the villages from time to time in order to shoot in the air, throw stun and gas grenades, take people out of their homes at night and generally show the population who’s top dog.

Given all that, one has to agree with M.: such behavior as that which took place at the beginning of June in Qaddum is reserved for gangs or terror organizations. True, the anarchists demonstrating in the West Bank have long chanted “Ain’t nothing you can do/the IDF is a terror organization,” but one would have expected the IDF soldiers to refrain from proving them right.

The IDF quickly claimed that a group of soldiers acting on their own initiative produced the pamphlets. Maybe. The testimonies speak of more than 10 soldiers and three vehicles. This is a bit large for an independent action by a few angry soldiers. Was their company commander aware of their initiative? If he wasn’t, how can an officer keep his post when he failed to notice his soldiers involve the army in a comparison to gangs and terror organizations? If he did know, and turned a blind eye – and I insist on believing, until proof emerges, that this couldn’t have been authorized – shouldn’t he be put on trial, to be dishonorably discharged (after a suitable period in prison), if proven guilty?

As for the soldiers themselves – what does the IDF intend to do with soldiers who disobeyed their orders to the point that they caused the people they rule to identify them as a terror organization? Does it intend to allow them to keep their positions, in a region where they might come into contact with the children they threatened? Does the IDF have the foggiest notion of the firestorm it will unleash, if one of those children will be harmed by its forces?

When the IDF wants to, it can find the guilty parties rather quickly. When a few women soldiers uploaded some pictures of themselves scantily clad, pictures which still cast the army at a better light than the goonish threats in Qaddum, the IDF responded speedily and effectively. If the Military Police’s Criminal Investigative Division (MPCID) still remembers how to investigate, we expect the soldiers responsible will be quickly found and brought to justice.

The details are known: the village of Qaddum, near the mosque, late morning, May 31st. If the IDF can’t find out which of its men were there, and on whose authority, maybe it should drop the F from its name and replace it with an M, for “militia.”

The MPCID has the ball. If the IDF does indeed see such wild and partisan actions as gravely as it claims, we will soon hear that MPCID arrested suspects and that it has prepared indictments. If we don’t, we’ll realize precisely how much the IDF cares about the disintegration of what’s left of its discipline. Anyone who still cares about the remains of the IDF’s good name will not allow MPCID to shirk its duty.

Advocate Emily Schaeffer, who represents Yesh Din in this case, added, “whether the pictures and writings were the work of lone, rogue soldiers, or done with the backing of their commanders, the suspicions point to a perverted and criminal abuse of authority and access to information, which is particularly disturbing when directed toward children. If this behavior is not eradicated from the IDF immediately, the ramifications will be devastating both legally and morally.”