Moroccan Jews have always celebrated Mimouna with their Muslim neighbors – and still do in Belgium, Italy and France. But in Israel, this charming custom fell prey to Zionism’s primeval instinct to divide and rule. 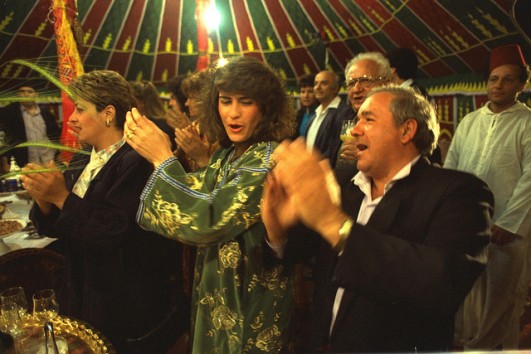 The Mimouna Festival, marking the end of Passover, is celebrated in a special tent in Jerusalem, April 16, 1990. (photo: Alpert Nathan/GPO)

Mimouna, the Jewish-Moroccan post-Passover festival, always offers an interesting glimpse into Ashkenazi-Mizrahi relations in Israel, by virtue of being the only Mizrahi custom that successfully acceded into the Israeli mainstream.

Fewer and fewer Ashkenazis come out of it unscathed: Those who look down on Moroccan customs as primitive and uncivilized get their share of abuse, as well as those who pay lip service to multiculturalism by taking part in this gluttonous fiesta, especially politicians who likewise hope to pander to an otherwise skeptical electorate.

But now, a new group of Mizrahi activists calling themselves The Golden Age have “named and shamed” Zehava Galon, the leader of the left-wing (and predominantly Ashkenazi) Meretz Party, for never having celebrated Mimouna. They invited her to their party so that the next day they could call her out on her hypocrisy.

What is the fuss all about, I asked myself, and as part-Moroccan, I decided to delve into the origins of Mimouna. I tried to figure out how a custom that developed in a faraway Muslim land made aliya as part of the Law of Return and immediately started simmering in Ben-Gurion’s melting pot.

I browsed Arabic websites in search of information about how Mimouna, similar to our Muslim Ramadan, is celebrated in Morocco today. And it turns out that the Muslim neighbors play a central role in it: They keep the leavened bread during Passover, and as soon as the sun sets they show up at the Jews’ doors with basketfuls of sweets and pastries, and celebrate together until the wee hours. Moroccan Jews and Muslims in Belgium, Italy and France still celebrate it together, like they did in the old country.

In one video that I found, the Rabbi of Brussels addressed the mixed crowd and talked about the persecution of minorities in Europe, and asked who could better understand how Muslims feel in Europe today than the Jews. The Imam of Brussels, for his part, said in his speech that Muslims are bound by the Quran to maintain good relations with Ahal al Kitab, the People of the Book (i.e. Jews and Christians). It sounded too sweet to be true, and not because of the excessive amounts of honey!

It’s so unfortunate that this charming custom lost its charm the minute it arrived in Israel. This festival of spring, health, fertility and good neighborliness has turned into a Zionist self-affirmation, clad in a jellabiya and a turban, and the Arab Muslims – the natural partners for it – are left out.

We are not short on festivities, thank heavens, but it’s so frustrating that the destructiveness of Zionism runs so deep. We Palestinians witness it all the time, but even for other ethnicities and cultural groups, divide and rule is the name of the game. Zionism labors to efface the unique characteristics and rewrite and appropriate history to its own ends. The harmonious relationships between Jews and Muslims in the Arab countries are all but wiped out.

One should be careful not to idealize that period: There were plenty of difficulties and crises. But 50 years on, looking at the racism and hostility around me today, I can safely say that our ancestors did a better job.

I’ve never taken part in Mimouna celebrations. When the day comes, I hope for myself and my Jewish friends that I’ll do it for the right reasons: respect, friendship and good neighborliness.