The Ministry of Education sent a reprimand (Hebrew) to the principal of the ‘Ar’ara high school, which sent its pupils to the Human Rights March held earlier this month. The letter sent by the ministry complained, inter alia, that “the pupils were carrying signs against racism, house demolitions, etc., which is contrary to the Director of the Ministry’s communiqué.” The ministry further promised an investigation.

In the school’s reply, the teachers quoted Minister of Education Gideon Sa’ar’s communiqué on the International Human Rights Day: “It is your duty as educators, who lead the pupils, to educate them that aside from the protection and defense of human rights, they are expected to show personal, social, civil and national involvement and responsibility. This involvement will led them to participation, and they are to believe that their participation will indeed contribute to the forging of the country’s way. Their right to participate is also their duty to show involvement and responsibility to the country and society.” Emphasis mine. One of the teachers told Haaretz that “A thousand civics lessons wouldn’t do what this one hour we were there did. The pupils came to me afterwards and said ‘We didn’t know the Jews were so kindly and good.’ Arab and Jewish pupils sang together ‘Arabs and Jews love each other’. It was amazing how they shouted together like that for human rights.” 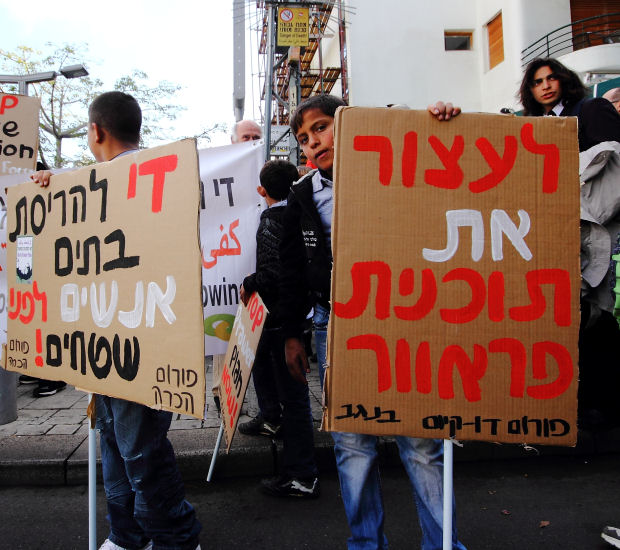 The ‘Ar’ara teachers, alas, suffer from terminal naiveté. They should have known what Jesus knew about hypocrites like Gideon Sa’ar: That they should be judged according to the rule “Do as they say, not as they do.” Sa’ar’s actions – this reprimand – exhibit his real intentions much more than an official saccharine communiqué.

Furthermore, when the teacher says that her pupils shouted “Arabs and Jews love each other” – Doesn’t she realizes this is precisely what scares people like Sa’ar? Gideon Sa’ar does a masterful job at selling himself to the public as a relatively liberal education minister, and it must be said that unlike the previous Likud minister, Limor “the slapper” Livnat, he did not spend his youth in rioting in theaters which showed plays he did not like.

But Sa’ar, it must be remembered, is first and foremost Im Tirzu’s education minister; he spoke at their convention last year, decrying the description of “values education” as indoctrination and promising much more of it (Hebrew). He is the minister under whom the ministry disqualified a book for pupils about the Universal Declaration of Human Rights because it contains two articles the ministry, and the minister, can’t live with: The right of every person to convert to another religion and the right of every person to emigrate to another country (Hebrew).

At the same time, Sa’ar ratcheted up the indoctrination of pupils (oh, sorry, I meant “values education”) to a whole new level: He now forces secular students to study Masechet Avot, that concentrated volume of Jewish ignorance and credulity, which contains such pearls as “he who has many wives, will also have plenty of witchcraft,” and “Don’t speak too often with a woman; This is meant at a man’s wife, and even more so at his friend’s wife; And hence the sages have said: ‘Anyone who speaks too often with a woman, does evil to himself, and abandons the study of the Torah, and will end up in hell.’” No doubt this will help Israel’s female pupils – a marginal minority of 51% – feel better about their place in society. Sa’ar is also the minister who made it a duty for every pupil to visit Hebron. And we’re not talking about some Breaking the Silence tour: No, this is an attempt at indoctrinating (err, sorry, “providing values education”) the pupils into believing that Israel must continue to rule Hebron.

So, truth be told, it’s hard to expect a minister who rejects the Universal Declaration of Human Rights because of the right to abandon your religion to show any tolerance towards human rights. Particularly when Jewish and Palestinian pupils exhibit no sense of shame over being able to overcome the walls of hatred. If we let this go on, we are in danger of educating pupils who might think – God forbid – that it’s perfectly OK for Jews and non-Jews to intermarry. And then where would we be? We must thank Sa’ar for exposing his real position towards human rights by sending that reprimand.