Maor Anava is a 28-year-old DJ and record collector from Tel Aviv. He helped found the Fortuna record label, which specializes in reissuing rare, 60s and 70s Middle Eastern psychedelic music on vinyl. Anava sat down with Café Gibraltar to talk about the high demand for Middle Eastern music among record collectors, and how his biggest customers don’t even live in Israel. 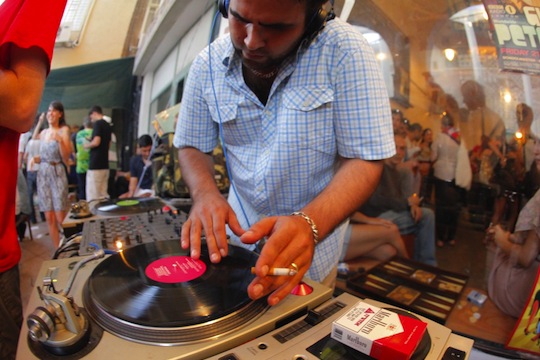 Tell us a bit about the mixtape

I put together some of the rarer things I’ve collected over the years. What unites them is that they were recorded in Israel between the years 1967-1978 and somehow were relegated to the margins and did not receive their dues during those years. These are the songs I’ve been playing for over the past year and are potentially going to be reissued under Fortuna, expect for the Tsvia Abarbanel song, which was reissued last year.

What was your first encounter with music?

At home. My father is of Syrian descent (from Aleppo) and we always listened to Egyptian music like Farid al-Atrash and Mohammed Abdel Wahab. We also listened to Samira Tawfik and Sabah, two Lebanese singers that he loved and was always played at our house. I also got a lot from my Moroccan side – one day I found a pile of records at my grandmother’s house who lived in Haifa’s Makhane David neighborhood. When she saw that I was becoming interested in music, she began talking about and showing me photos from the musical gatherings that took place in the neighborhood, which were organized by her neighbor at the time, Suleiman Almaghrabi, a phenomenal Moroccan singer.

Obviously, I have a special place for vinyl. Taking care of plastic, together with the packaging, the design, the credits – I see it as an added value. However, we’re in 2013 and I’m not trying to knock the digital format. Half of the things I love most and play come exclusively from digital.

Where do you buy your music?

A website owned by a French guy named Victor, he’s a vinyl collector who sells his stuff through his site. We connected over the last half year, and in one of our conversation I discovered that he is Jewish, and the son of immigrants from North Africa. His collection includes a lot of music that was recorded in Israel under the Zakifon and Kolifon label, things you can’t even get here. He found most of them in France through a woman whose husband had a record store in Paris’ Jewish quarter, and when he died she just sold it all. He also has a lot of afro, Bollywood, Latin jazz, funk, Middle Eastern and North African music. It’s an amazing site.

Before we press play?

Basically, everything we do at Fortuna we do out of love for music, since anyone who deals with music in Israel knows it’s not a lucrative business. It comes from a desire to share this amazing music with the rest of the world. It’s pretty funny – most of our sales are actually in Europe, the US, Japan and Australia, rather than Israel. There is a lot of interest and demand for the Middle Eastern sound over the last couple of years. But we are working in our region out of nothing but love.