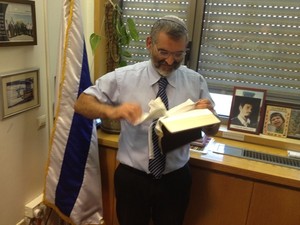 According to the Israeli website NRG, MK Michael Ben-Ari (National Union) tore the New Testament to pieces and then threw it in the trash after the Bible was sent to all 120 members of Knesset by a man named Victor Kalish, who according to NRG specializes in publishing Christian religious texts.

In the article, Ben Ari is quoted as saying, “This abhorrent book promoted the murders of millions of Jews during the Inquisition and the autos da fé… this is an ugly missionary provocation by the Church, there’s no doubt that the book and its senders belong in the trash of history.”