The immediate solution to every threat or conflict in Israel is to give more weapons to civilians, which often end up killing innocents ad disproportionately affects women. 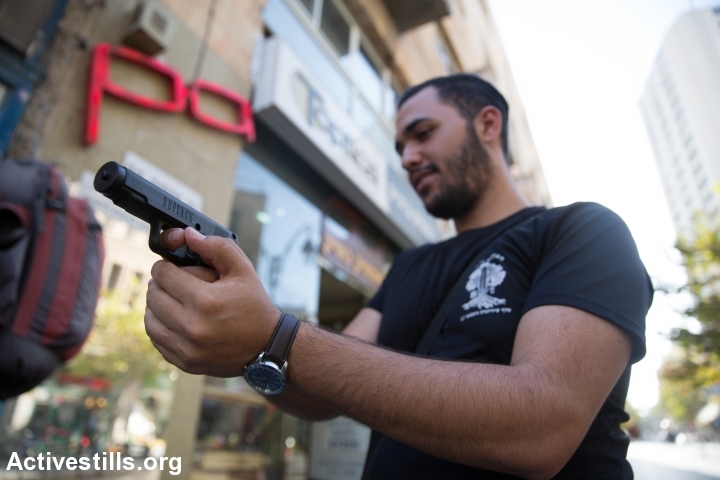 Israeli shows a tear gas gun he just bought at a gun shop in Jerusalem on October 15, 2015. Arms shop’s owners report a rise in demand for wepons and other self deface gear as violance continues around Jerusalem. (photo: Yotam Ronen)

These days, and actually most of the time, violence in the streets is making headlines on a near-daily basis. The dangers of citizens arming themselves, of the growing militarization of our society, and the way these two intersect to create more violence — especially toward women — can hardly be found in our newspapers.

Israeli society’s sense of security greatly stems from both developing our weapons industry and the massive arming of the IDF. This is our answer to every threat, whether real or imagined. This is a society in which the army plays a significant role in our daily lives: in the education system, on the street, vis-a-vis almost everyone we know. This is a society in which weapons — both the private and public sphere — are completely normal. Specifically in the public sphere, weapons are viewed as something that protects us.

A significant portion of the Israeli economy is based on its security industry, whether development or importing and exporting arms and security technology. The government actively supports these industries, promoting a feeling that they are necessary in order to keep us safe.

The last few months have not only seen the streamlining of the process of procuring permits for firearms, but the active encouragement of civilians to arm themselves and to use their weapons as a response to the feeling of helplessness on the streets.

But is the proliferation of weapons truly the right answer to violence? 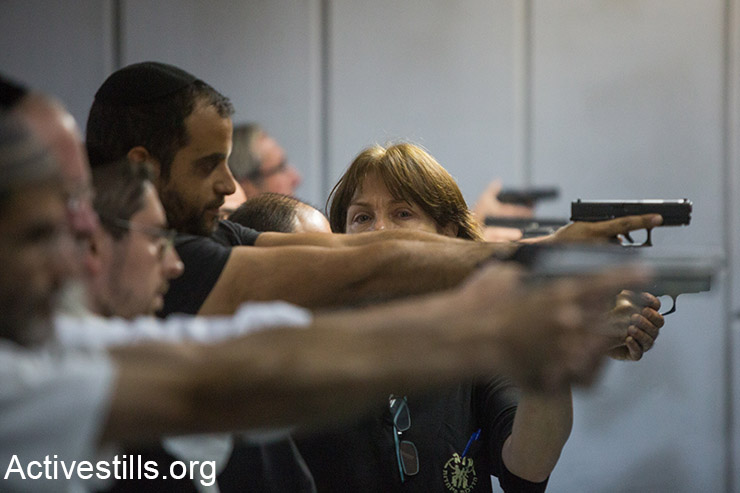 Israelis attend a shooting practice in a gun shop in Jerusalem on October 15, 2015. Arms shop’s owners report a rise in demand for weapons and other self defence gear as violence continues around Jerusalem. (Activestills.org)

The fact is that there are many people who feel threatened by the sight of a weapon. Guns are a threat even for the average person on the street: only recently have we witnessed a number of cases in which security forces and civilians have used their weapons disproportionately, not to mention instances in which innocents have been accidentally wounded or killed in shooting incidents.

Violence, of course, is not solely relegated to the public sphere. A large part of violence against women takes place at home. The “Gun Free Kitchen Tables” has successfully forced the authorities to enforce instructions by the Defense Ministry published in 2013, which order security companies to collect guns handed out to their employees at the end of the day. The orders came in the wake of many cases of domestic murders using guns belonging to security guards. From the moment these orders went into effect, not a single woman or family member was murdered by security guards.

But this decision was annulled by then-Minister of Public Security Yitzhak Aharonovitch in November 2014, allowing security guards to carry weapons outside their places of work. Aharonovitch explained his decision as stemming from the “need to strengthen the feeling of security among the population,” following a wave of terror attacks.

The ease with which civilians can obtain gun licenses — as well as the panic and feeling of danger in the streets — leaves us vulnerable to physical harm. We must openly oppose a culture in which weapons are the solution to every danger or conflict, against a culture of violence and arming, against a culture in which women suffer from violence that grows more extreme as the tension in the streets grows — a culture that inevitably permeates the home.

This militaristic worldview, which relies on more murderous weapons in the streets and our homes, must be replaced with a worldview that protects the life of women and the population at large. A worldview that strives to reduce the violence in our lives.

Tanya Rubinstein is the head of the “Hamushim” project, as part of the Coalition of Women for Peace. This article was first published in Hebrew on Local Call. Read it here.