A recent poll finds that 72 percent of Jewish Israelis believe Israel’s control over the Palestinian territories does not constitute occupation. So what do you call military rule over a captive population that didn’t vote for the army to be there? 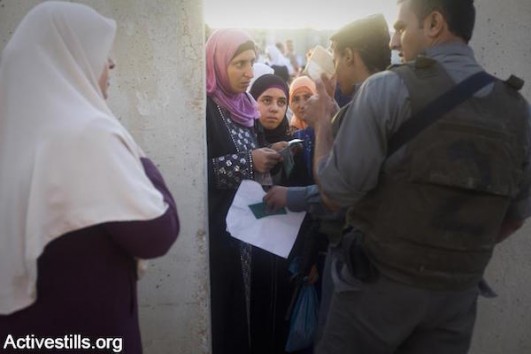 Israeli soldiers check Muslim Palestinian women’s IDs as thousands try to pass through the Qalandiya checkpoint on the last Friday during Ramadan, September 3, 2010. Harsh restrictions by the Israeli army meant that many who attempted to pass were turned away, while others waited for a long time at the checkpoint in Ramallah. (Photo: Oren Ziv/Activestills)

Depending on who you speak to, the word “occupation” is either the most loaded or the most ignored term in Israel-Palestine. For some, it’s a canard bandied about by traitorous leftists who want nothing more than to destroy the country by smearing it into oblivion; many believe that Israel cannot occupy territory that the bible says was promised by God to Jews; for a dwindling minority, it represents all that is rotten in the State of Israel. And for others, it’s something that happens “over there” which a lot of people seem to make a lot of fuss over, but which has (as far as they’re concerned) little impact on their day-to-day life.

So it’s perhaps not surprising to read in the latest Peace Index from the Israeli Democracy Institute that 72 percent of Jewish Israelis believe Israel’s control over the Palestinian territories does not constitute occupation — of whom 50 percent are “sure” that Israel is not an occupying power, and 22 percent “think” that it isn’t.

If that’s the case, though, what word does accurately describe military rule over a captive population that didn’t vote for the army to be there and that has no sovereignty? How do you describe a military regime that can seal off entire towns, villages or the whole West Bank whenever it feels like it?

How would you describe a state of affairs wherein a native population of one ethnicity is subject to military law while a civilian population of a different ethnicity that has been moved into the territory, against international law, is subject to civil law? (Aside from apartheid, that is.)

What about an authority that sits within the Ministry of Defense, and that decides where the people under that military law can and can’t build homes? What would you call the same authority when it tears down the houses of those who weren’t fortunate enough to get inside the one percent approval bracket Israel gives to Palestinians seeking building permits in the West Bank?

How would you characterize a situation in which Palestinians can have their land arbitrarily designated a firing zone, conservation area or archaeological zone, and therefore have it confiscated? Or one in which Palestinians’ land is expropriated for illegal settlements and to which the army bars them from returning? 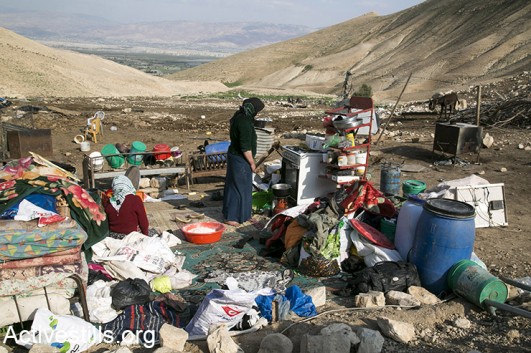 A woman from the small community of Ein Kurzliya in Jordan Valley, West Bank prepares bread next to her belongings, following a demolition of houses and animal shelters in the area, February 10, 2016.  On February 10, 2016 Israeli authorities conducted mass demolitions in 4 areas in the Jordan Valley. Seven family houses and six animal shelters were demolished, leaving 71 people without a roof over their heads. In addition, a water pipe system that provides water for 300 people was deliberately damaged. (Activestills.org)

If “occupation” is the wrong word to describe a reality in which Palestinians can, with no power to object, be kicked out of their homes for a few hours or a few days at a time so that the Israeli army can come and play war games in their backyards — what is the correct word? How do you classify a regime that considers a gathering of 10 or more people to be an “illegal assembly,” and which responds by arresting, beating or shooting the participants?

Or how about a daily existence in which every entry and exit requires military approval and is scrutinized, logged and tracked unfailingly? And when that military authority can take away freedom of movement as a means of collective punishment — what is that called?

In a manner of speaking, you can call this state of affairs anything you like: an occupation by any other name would still be as unjust. But that is precisely the point behind this poll finding — the denial and argument here is not, despite what it may seem, over semantics. At the heart of the matter is whether one believes that Israel’s military rule over 2.8 million Palestinians in the West Bank, and its siege on 1.8 million Gazans, are just or not. So where do you stand?