Reham Dawabsha is the third fatality from the attack by Jewish extremists in late July. Authorities used the attack as an excuse to increase counter-terrorism authorities but haven’t made any arrests in the case. 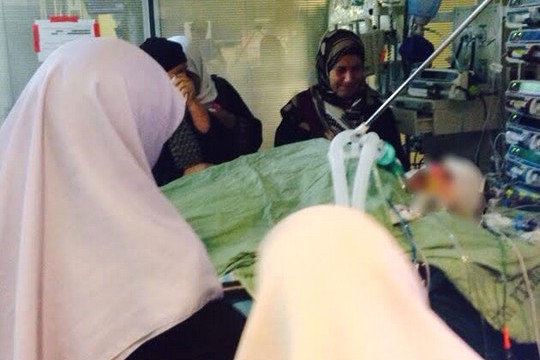 Reham Dawabsha, who was seriously burned in an arson attack by Israeli extremists in the West Bank village of Duma 39 days ago, succumbed to her wounds early Monday morning. Reham, who turned 27 on Sunday, was mother to one-and-a-half-year-old Ali, and husband to Sa’ad, both of whom were also killed in the terrorist attack on their home.

She is survived by four-year-old Ahmed, who is in currently in serious condition at Tel Hashomer Hospital in central Israel.

Doctors at Tel Hashomer summoned Reham’s family members on Saturday following a serious deterioration in her condition. The family brought cake to celebrate Reham’s birthday, and she died a short time thereafter.

Although four-year-old Ahmed Dawabsha is still classified as being in serious condition, he is slowly making improvements, managing to communicate with those around him in recent weeks. He has begun asking to speak with his mother and father, asking where they are.

At six in the morning on the last day of July, still-unidentified attackers threw Molotov cocktails into the Dawabsha family home in Duma. The attackers spray painted “revenge,” “the messiah lives,” and left stars of David on the scorched home’s walls. 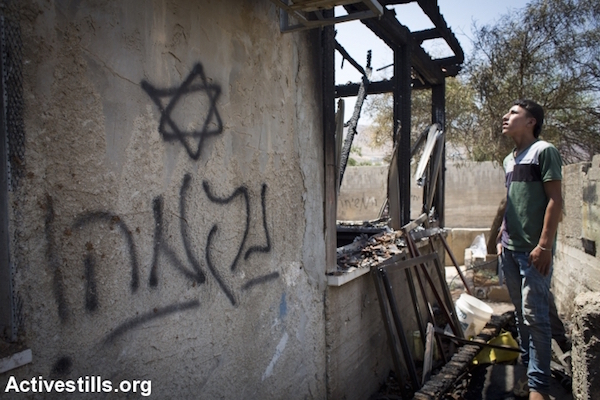 A Palestinian youth looks at Hebrew-language graffiti reading “revenge” on the Dawabsha family home, which was set on fire by Israeli extremists killing three members of the family, July 31, 2015. (Oren Ziv/Activestills.org)

Responding to the news of Reham’s death Monday morning, a number of MKs expressed outrage and lament that authorities have not arrested a single person in connection with the deadly arson that Israeli officials are calling a terrorist attack.

Zionist Union MK Zouheir Bahloul said: ”Thirty-nine days and three family members dead and still not one arrest or even a lead about who is responsible for this inhuman and barbaric act.”

“More than a month has passed and the murderers are still free, terrorism and hate crimes against Palestinians continue to take place, and nothing has changed,” Joint List MK Aida Touma-Suleiman said. “The policy of occupation is what sprouted the Dawabsha family’s murderers and it is responsible for the death of Reham, Sa’ad and Ali.”

Israeli law enforcement and domestic intelligence authorities expanded the use of rights-violating practices such as administrative detention in response to the attack on Duma. In the days following the attack Israeli authorities placed a number of right-wing Jewish activists in administrative detention, but have not announced any arrests in direct connection to the deadly arson attack in Duma.

Last week, lawmakers fast-tracked a new “terrorism bill” which would greatly expand the state’s powers to deny suspects’ civil rights in the name of fighting terror.

The Dawabsha family was expected to lay Reham to rest in Duma Monday afternoon.