Sometimes it feels like this is some sort of a test. Will the leftists mourn now? Will they say that they feel the pain? Will they dare criticize the war now that our soldiers have died?

So there, yes, it hurts. I know that that doesn’t necessarily apply to everyone, but it hurts me. From the moment I heard of the horror yesterday morning, it was as if a stone was laid on my heart. I prayed that it wouldn’t be one of the friends whom I know are there. I was partially relieved when it turned out that it was none of them, before turning horrible once more when I found out that one of those killed was a friend of a close friend. It pains me, but what can I do, I grieve not only for them. The death of dozens of Palestinians last night also pains me. Yes. It is okay to suffer the pain like this; to mourn death wherever it strikes. It does not diminish the pain. 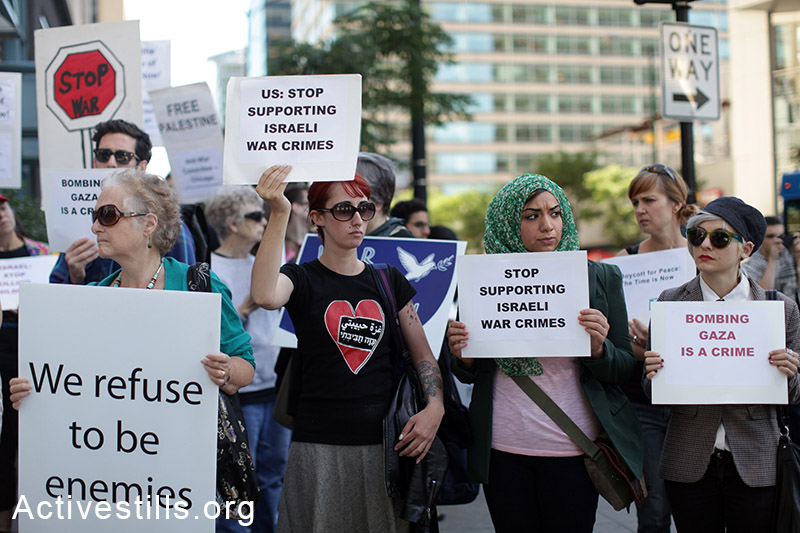 A protest condemning the Israeli assault on the Gaza strip, held outside the Israeli consulate in downtown Chicago, IL on July 16, 2014.

And I don’t want to be tested. I don’t want to have to defend myself. I want the warmongers to defend themselves. Let them explain themselves. Let them say why, in their view, it was the right thing to do. Why the deaths of all those who perished in the past 24 hours and the past month were more necessary or more justified than those of Pillar of Defense or Cast Lead or Summer Rains or Hot Winter. Or maybe this time or in the next operation, which will surely come in another year or three if we do not stop the policy of blockade and war and begin to relate to people in Gaza as human beings with whom we sit down to negotiate a real peace. Let Netanyahu prove that he cares about soldiers and civilians. Let Yair Lapid be tested. Let Tzipi Livni make sure that it won’t happen again.

And then I recalled my visit to Northern Ireland last year. During the visit I met protest singer Tommy Sands, who told me the following story: a few years after the Good Friday Agreement, he organized a meeting between former underground groups veterans – from the IRA and the Loyalists, people who fought each other, killed each other and served time in prison. When they arrived, they refused to shake hands. Then Pete Seeger arrived to sing in the meeting. He sang “Where Have all the Flowers Gone,” an American song in memory of the fallen, and he saw both groups singing and crying. At the end of the event Seeger told Sands “As far as I’m concerned they don’t have to shake hands. So long as they can sing and cry together, that’ll do me.” I wish this day would come here.

Translated by Sol Salbe. Read this post in Hebrew on Local Call.