Just Vision‘s latest film is a moving snapshot of the Palestinian plight with Israeli settlement policies in an East Jerusalem neighborhood –  and the Israeli Jews that raised awareness about the issue by protesting there. While there is no happy ending, the movie introduces audiences to some of the Palestinians and Israelis who found themselves taking part in a common struggle.

On several occasions during the winter of 2009-2010, I joined a small group of Israeli protesters who walked on Friday afternoon from downtown West Jerusalem to a demonstration in the East Jerusalem neighborhood of Sheikh Jarrah. They carried red flags, held signs advocating freedom for Palestine in general and Sheikh Jarrah specifically; and they chanted in Arabic and Hebrew, accompanying themselves with drum-rolls that often ended with them crying in unison “enough with the occupation!”

On the pedestrian mall of Ben Yehuda Street in West Jerusalem, passersby jeered or stood open-mouthed at the site of unabashed leftists in that very right-wing part of what is basically a very right-wing city. Once, a young soldier on his way home for a weekend furlough walked over to a female protester, reared his head back and hawked a gob of phlegm at her. He was wearing a yarmulke and the insignia of an elite combat unit. As we made our way along Hanevi’im Street, a trio of 20-something, well-heeled Palestinian East Jerusalemites stopped to point and giggle as they exchanged comments in Arabic. They were sorry for the families that had been evicted from their homes, they told me, but they did not see the point in protesting and were amused by the anarchist-grunge sartorial style of the Jewish demonstrators. 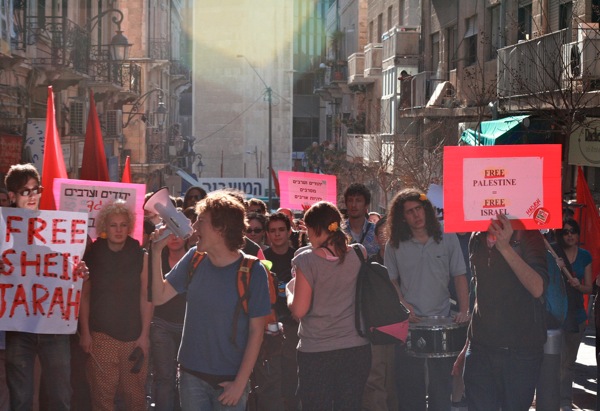 Once in Sheikh Jarrah, the activists stood across the street from a cluster of houses that had been invaded by settlers. Palestinians had lived in them since the 1950s, but the Israeli courts had ruled that those houses had once belonged to Jews, or that the state could nationalize the homes so the Palestinian owners would henceforth be tenants – even though they were not citizens of Israel. In any case, either because they refused to pay rent for houses they had owned for half a century or because the courts decided that the right of Jews to live in their homes – not the Jews who had allegedly occupied those homes before 1948, but any Jews – trumped the rights of those Palestinian families to continue living there, they were evicted  after many years of legal struggles. Paramilitary police came in the middle of the night, broke into the homes and threw entire families onto the street. And while the Palestinian families stood on the street, the police threw their possessions out and radical religious settlers moved in, right in front of the crying Palestinian children and the bewildered old people sitting on plastic chairs on the street.

It seems like an unjustifiable scenario, but the vast majority of Jewish Israelis were indifferent or unaware of what was happening in Sheikh Jarrah, even though it was just 10 minutes’ unobstructed walk from the heart of downtown West Jerusalem. For weeks the only protesters were from the Israeli radical left. The Jerusalem area police were always out in force on those Fridays in Sheikh Jarrah, supplemented by the paramilitary border police and the riot control police. They stood and watched the protesters until suddenly, for reasons that were often unclear (perhaps they were just bored), they would lunge into the crowd and start beating up and arresting protesters, often dragging them on the pavement.

Once, the person who had given me a lift to Jerusalem from Tel Aviv was arrested while standing right beside me. By coincidence a European journalist friend strolled by a few minutes later (he’d just finished a late lunch with friends at the nearby Ambassador Hotel) and offered to drive me to the 24-hour minivan service that plied the Jerusalem-Tel Aviv route. But he took a wrong turn and we ended up in Mea Shearim, just as the Sabbath began. The streets were empty of traffic, the traffic lights blinked amber and the ultra-Orthodox men began shouting “Shabbes! Shabbes!” as our car approached. My friend floored the accelerator and we slid down instinctively to avoid being hit by stones.

The Israeli Jews who were arrested in Sheikh Jarrah that Friday included the director of a prominent NGO and a couple of well-known activists. They spent the Jewish sabbath in jail at the Russian Compound and were arraigned on Saturday night. The judge ordered them released and scolded the police for having arrested them without cause. So the story made the papers the next day.

The publicity from the high-profile arrests was good for the movement. It raised awareness amongst Israelis about the situation in Sheikh Jarrah. After a few weeks, the liberal left began to join and soon outnumbered the radical left at those protests. Soon a Who’s Who of  liberal politicians, activists, artists and journalists – David Grossman, Hendrik Hertzberg, Mohammad Barakeh, Shulamit Aloni, Yossi Sarid, Avraham Burg – made Sheikh Jarrah famous with their visits. Liberal American Jews came on JStreet junkets to see the protests and meet the Palestinian families that had lost their homes.The activists began selling Sheikh Jarrah T-shirts to help defray legal costs and Palestinian kids wheeled wooden carts over to the place where the demonstrators gathered and hawked little bags of popcorn, plastic cups of Turkish coffee and fresh-squeezed orange juice.

But the evicted families stayed evicted and the settlers continued to occupy their homes. In fact, the settlers’ presence increased as the leftist protests swelled in number. So what had been accomplished?

This question is explored in the documentary film “My Neighborhood.” Directed by Rebekah Wingbert-Jabi and Julia Bacha, who also directed “Budrus,” the film traces the history of the protest movement in Sheikh Jarrah by focusing on two characters – Mohammed El Kurd, a Palestinian boy from Sheikh Jarrah who is 11 when the film begins; and Zvi Benninga, a Jewish Israeli from West Jerusalem who is in his early 20s. Zvi and his sister Sara become activist leaders in the Sheikh Jarrah solidarity movement.

Watch the trailer for ‘My Neighborhood’:

Mohammed, articulate and compelling, describes the day settlers moved into part of his family’s house – a separate building which they’d stopped constructing while waiting for permits to be approved. There is footage that shows settlers and police roughly shoving aside Mohammed’s elderly grandmother as she tries physically to bar these strangers from moving into her own backyard – literally.

Zvi is the type of educated, idealistic middle class Israeli that is often referred to as the “beautiful Israel.” He describes his own growing political awareness and activism in the face of what he recognizes as a stark injustice in Sheikh Jarrah. The film shows the mistrust of Mohammed and his grandmother, who doubt that any Jew would go against his own people to take the side of Palestinians. And it hints at Zvi’s growing sadness and hopelessness at effecting change, even as his commitment to activism grows stronger and the crowds showing up at the Friday demonstrations swell from dozens to hundreds.

It is a touching story, well told, intimate and neither outraged nor sentimental. The white boy does not save the brown boy; justice does not win out in the end; and the police remain unmoved by the nonviolent protestors. I won’t be giving anything away by volunteering the information that none of the evicted Palestinian families of Sheikh Jarrah have had their homes returned; and not only are the settlers still there, but their numbers have grown.

Mohammed and Zvi both seem to understand, by the end of the film, that the struggle is going to be a long one. The Friday demonstrations have petered out; the liberal leftists and the hardcore activists have moved on. In real life the good guys don’t always win.  But the Palestinian boy and the young Israeli man have gained from the wider struggle a sort of strength that comes from being aware of the ‘other’s’ humanity. For Zvi, there is also comfort in moral clarity. Mohammed, now 14, says he wants to become a lawyer so he can win his family’s home back via the court system. Zvi is not fighting to get his house back. He and his family live in an old Palestinian house in West Jerusalem – an irony that does not seem to escape them. But his fight is for something less tangible and more elusive. And it cannot necessarily be won in a court of law.