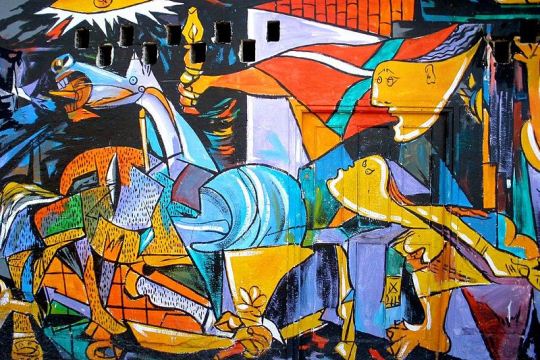 A survey conducted in Gaza this September showed that a majority of its residents would prefer Fatah to Hamas if elections were held. Early this month President Mahmoud Abbas spoke again of a two state solution and even hinted at compromising on the right of return.

What could Israel do in light of this but start a war? Israel can’t deal with peace. It has become a war machine, and I’m not referring only to its over-militant decision makers and those who take their orders. Decades of media bias and dogmatic education managed to turn its citizens into a blinded mob that always support violence: today’s Haaretz poll shows 84 percent back the current offensive. A foreign television crew with which I work interviewed passersby today on the situation in Gaza. “We know they die by the score there,” one Tel Aviv resident told the camera, “It’s not that we don’t know. We just don’t care.”

Of course Palestinians can be extremely militant and violent. You would be too, after decades of enslavement, and if you believe you could overcome such wrath, well then, you’d be like the majority of Palestinians. As for Hamas, I am not fond of them one bit — notice this piece begins with my faith in a survey that showed it weakening. The thing is, it is (or was, until recent events) weakening.

Meanwhile, the Israeli Right is only becoming more powerful. True, it lies, diverts attention, misinforms and uses fear-mongering to gain power and support. The media effectively dehumanizes Palestinians and fosters our sense of victimhood, and the media is run by powerful people with links to Jerusalem high brass, but the simple people have heads on their shoulders and hearts in their chests. They too share responsibility. We have all been failed by the Israelis in recent days, again, all of us – the world, the Israeli Left, and especially the Palestinians.

The Israeli Left does still exist, and bravely struggles in the face of mounting de-legitimization, but it may finally be declared too small to count. Now that Labor leader Shelly Yachimovitch expressed full support for Netanyahu and Barak’s actions, only the tiny Meretz party (with three seats in the 120 seat Knesset) and the mixed Hadash party (only a minority of whose voters are Jewish) remain to offer an alternative. Both have openly opposed the military offensive.

In Jewish tradition, a dairy dish into which a piece of meat fell remains kosher, so long as that piece of meat is less than sixty times the size of the full dish. It is “batel b’shishim” – “cancelled out by sixty.” The community of Israelis who seek justice, life and human rights isn’t yet the sixtieth part of this country’s population, but alas, we don’t count for much. I would advise those who are unsure of how to feel about the current events not to decide their opinion based on our existence and our actions. Israel does not deserve to have us as a fig leaf.

We Israelis deserve the eternal war we live in. We deserve our murderous government, which is now sailing to the safe port of reelection on a river of Gazan (and some Israeli) blood. We deserve all that for saying yes to death again and again, but the Palestinians, who suffer of the same Bibi’s whims, don’t. They actually reach out for peace, both on the popular level and in formal speeches. Well, maybe not anymore. Not at the moment, not even if the ceasefire does come tonight. Yet another opportunity massacred.

Can we change? Should we never say die? Should I ask all of you, my readers around the world, to put pressure on us, to deny us business and culture so that we are forced to evolve? I don’t know anymore. Do so but without great expectations. It’s up to world leaders to make the difference here, and they need to treat us with enormous toughness, which they hardly seem inclined to show. So it remains: there is no way out, there was, but there isn’t now. A good night to everybody from Tel Aviv, and may the memory of the victims be blessed.