Na’amat, a veteran organization purporting to advocate on behalf of women in Israel, recently hauled a community-based group to court. The group’s crime? Occupying an abandoned building to provide housing for families in need. A closer look at the incident reveals a group in the service of the Ashkenazi hegemony, promoting paternalistic notions of ‘help’ while contributing to the oppression of Palestinians and Mizrahi Jews.

By Inna Michaeli and Yasmeen Daher 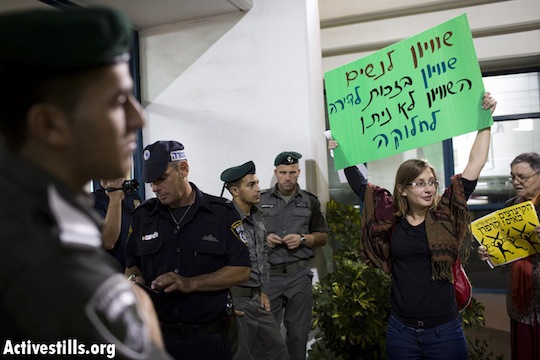 On one page of the NA’AMAT-USA website, the word “help” appears at least eight times. A recent event involving the Zionist women’s organization reveals the limitations of “help” when it comes to the grassroots activism of women on the margins of Israeli society.

Ha’maabara (“The Transit Camp”) is a group of community-based activists who have taken over several abandoned buildings in Jerusalem, in order to provide immediate solutions for low-income families who are unable to provide for themselves in light of the absence of adequate public housing in Israel. The building that Ha’maabara presently occupies in the impoverished Katamonim neighborhood is owned by Na’amat, which used to operate a kindergarten there, charging more than most families in the neighbourhood could afford to pay. For the past four years, the building stood in ruins, collecting health hazards like used syringes and more. Upon their “invasion,” Ha’maabara activists invested immense time and effort into cleaning the building and operating diverse social activities for free.

Na’amat demanded that Ha’maabara evacuate the building, while admitting Na’amat itself did not have the resources to operate it for the benefit of the residents. Negotiations resulted in the following ultimatum: Ha’maabara could use the building on the condition that it would not serve as a headquarters for a public housing struggle. But as it happens, public housing is the priority for this neighborhood’s residents, many of whom are single mothers trapped in the vicious circle of poverty. The fact that the building was serving the needs of women in the neighborhood, empowering them and helping organize their community, did not stop Na’amat from resorting to the legal system, seeking a court ruling to remove the group from the building.

Make no mistake; we are still lingering in the same old district of white, elitist feminism and its dominance. Founded in 1921 by Zionist women who came to Palestine, Na’amat’s paternalistic notion of “help” is reserved for those who both abide by the rules of the game and submit to the limits of its discourse. “Help” is extended to those who don’t challenge this limited understanding of feminism. What is addressed here as “white” feminism does not indicate a racial group. It is rather a conceptual (mis)understanding of feminism. In short, it is a feminism that envisions a simplistic world divided between two genders, with men on one side and women on the other. In this heterosexist scheme, men are the oppressors and women are the oppressed, and the latter “need” progressive, enlightened and liberated women to help them. This old-fashioned but pervasive view of gender equality does not account for realities of class, racism, occupation and colonialism.

These other factors complicate the picture, making solidarity a quest unattainable without consideration of real social, economic and political inequalities. Na’amat must reflect on its own role in the oppression of the same women the group allegedly wants to help. Na’amat identifies as part and parcel of the Jewish-Zionist establishment. Its historical role and its current positions (from supporting the Israeli occupation of East Jerusalem to encouraging U.S. economic and political support for Israel’s military endeavours) make Na’amat complicit in the continuous oppression of Palestinian women and men. Its leadership is comprised of mostly middle and upper-class Ashkenazi women. Yet Na’amat raises financial resources for all “women in Israel,” while the majority of women in Israel – Palestinian, Mizrahi and immigrant – are de facto excluded from its ideology and its decision-making circle. The struggle of these groups for equality and justice not only fall outside the scope of their agenda, they actually threaten the very foundations of this “white” feminism that is constituted on patronizing notions of “help,” always supported by “good intentions.”

Therefore, it might come as no surprise that the three lawyers hired by Na’amat to take the community activists and single mothers to court expressed serious concern about poor women organizing for radical change. They are worried about activities as dangerous as screening a film about the Black Panthers – a movement that dismantled the narrative of Israel as a safe haven and welfare state for all Jews. The movement succeeded in debunking the myth of the Israeli melting-pot for Jews from all over the world, exposing systematic social, economic and cultural oppression of Mizrahi Jews. A film that tells the story of Mizrahi revolt against the oppressive structures of a Ashkenazi-dominated establishment, of which Na’amat is a part, is a threat.

Disregarding decades of critique and growth in feminist theory and practice, Na’amat perpetuates an anti-feminist reality. It disregards the atrocities of privatization of public services, which have impoverished and marginalized entire communities, especially women on the margins of society. Instead of advocating for properties in marginalized neighborhoods to serve the public, rather than serving as an asset of an NGO, Na’amat protects and backs the disastrous anti-social economic agenda of the current and the preceding governments, enjoying private ownership over empty buildings designated for the benefit of the public.

It is also notable that a section unique to the organization’s American website is dedicated to “Arab Women,” claiming that the organization is “involved in promoting the Israeli Arab woman’s quality of life,” more than “any other organization in the country.” You don’t need be a feminist activist in Palestinian society in Israel to immediately recognize the fault in this claim, and its lack of respect for Palestinian feminist organizations, which have been, together with other Arab counterparts, active since the end of the 19th century (contrary to Na’amat’s claim that it is the “first feminist organization in Palestine”). Na’amat’s patronizing discourse of “helping” Arab women goes hand in hand with its disregard of Mizrahi feminism in general, and grassroots organizing in Katamonim in particular. As Gayatri Spivak’s described colonial relations: “White men are saving the brown women from brown men.” Here, white women claim to “help,” if not save, Arab and Mizrahi women, remaining unaccountable for their own complicity in national, ethnic and class oppression, and their own privileged position and access to resources.

Na’amat presents itself in Israel and abroad as “the largest and leading Women’s Movement in Israel.” However, their actions against Ha’maabara and use of state violence indicate an imagined and privileged construction of “women in Israel,” who have no nationality, no ethnicity and no socio-economic class. These actions clearly expose the line drawn by Na’amat between politics of “help” for marginalized women – as long as they don’t challenge the social, political and economic order of their own marginalization – and the politics of solidarity that must form the base of any feminist action and women’s movement.