Nagey Tamimi (47), a leader of the Popular Committee in Nabi Saleh, was arrested last night during a raid on his home. Dozens of soldiers surrounded and entered his home at 1:30 am, roused Nagey from his bed and arrested him. He was blindfolded, handcuffed and taken away. At the same time, soldiers raided the home of Bassem Tamimi, another leader of the Popular Committee. Soldiers broke down his door and found his wife, a B’tselem videographer, standing by herself with a video camera. They attempted to destroy the video camera and search the house. Since Bassem was not at home, they left. 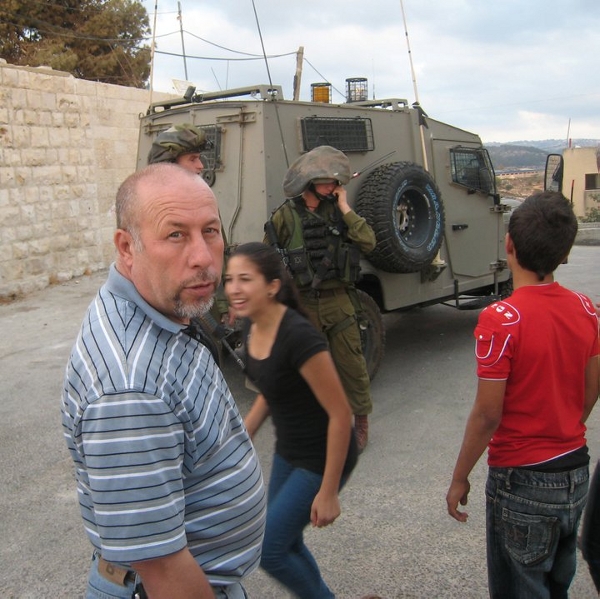 Last night’s arrest signals a renewed Israeli effort to end the demonstrations in Nabi Saleh by imprisoning the leadership of the Popular Committee. In recent months, Nabi Saleh has been subject to arrest raids on an almost daily basis. Ten percent of the village population has been arrested since the beginning of demonstrations in December 2009. Israeli officials have arrested children from the village in order to extract confessions that will be used against Tamimi and other leaders in military kangaroo courts. This method of incarceration was tested against Bil’in’s Abdallah Abu Rahmah, a Popular Committee leader who had been in jail for the past 14 months on incitement charges. Abu Rahmah’s conviction was based  largely on the testimonies of a number of children from Bil’in that had been arrested in night raids; the military prosecutor failed to produce any evidence to prove its claim that Abu Rahmah had thrown stones or carried a weapon, even though the army films every demonstration.

In January 2011, 14 year-old Islam Tamimi was arrested during a night raid on his home in Nabi Saleh. After a night of psychological torture which included threats, beatings and exposure to the elements, the child was put through a five hour interrogation without access to his lawyer or parents. Tamimi’s coerced testimony will likely be used to charge Nagey Tamimi with incitement and illegal gatherings. Defense of Children International has filed many complaints regarding Tamimi while Israeli authorities have remained silent about their serious transgressions.

I recently interviewed Nagey Tamimi for a piece in Le Monde Diplomatique. Canadian journalist Jesse Rosenfeld I spent the night with Nagey, who had invited us to stay in the hope that our presence would mitigate soldiers’ violence in case they came for him in another night raid.. Throughout the night, we watched coverage of the demonstrations in Egypt while Tamimi reflected on the connections between Nabi Saleh and Tahirir square. “We live the Egyptian type of demonstrations and repression in Nabi Salah week after week, and so we naturally stand in solidarity with the Egyptian people,” he told us. It is all but certain that Bassem Tamimi will be arrested in the coming days or weeks.The leadership of the unarmed demonstrations will be taken away from their village.

Now Tamimi faces a long jail sentence for unarmed resistance to Israeli occupation. Unlike the demonstrators in Egypt, Tamimi’s case will receive little media attention. The Israeli Occupation is relentless and unwavering in its attempt to control the Palestinian population.  Quite simply, Israel is behaving with impunity in a climate of democratic revolution in the Middle East.