Before he was Minister of the Economy, Naftali Bennett was a Knesset hopeful whose plan to annex the majority of the West Bank shook the political establishment. Two years later, it’s worth seeing just how much he has gotten done. 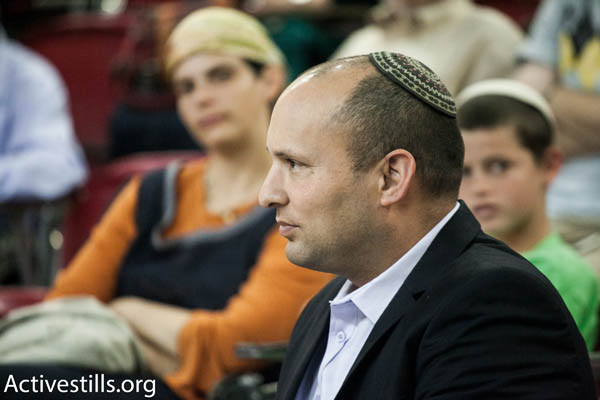 When Naftali Bennett first entered the coalition, I wrote of his plan to create a de facto one-state solution. Now that the current government is in its final days, it is worth taking stock of his progress and looking at what his plans are for round two.

Strengthening the belief in the supremacy of claims to the Jewish homeland and the justness of measures to maintain control of it.

The last straw of this current government was the Jewish Nation-State Bill. As he stated in his much-watched performance at the Brookings Institute, Bennett’s next target is the Basic Law: Human Dignity and Liberty, the constitutional basis in Israel for civil and human rights. He believes the “balance” was tipped by the Supreme Court and that Israel has become too democratic and not Jewish enough.

It is therefore no surprise that Bennett’s Jewish Home party has indicated it will demand the Justice Ministry in the next government.

Uniting the nation and its leadership

Though it was clear that Jewish Home’s Uri Ariel was Housing Minister only for the West Bank settlements, Bennett’s personal popularity has only grown. His latest campaign video shows him trying to break out of the ‘settlement party’ box.

Military strength and controlling of the territory through the security establishment.

Bennett scored big political points during the last war in Gaza by arguing in favor of a ground invasion to shut down the tunnels early on in the operation. The fact that he was ahead of the curve has been important for his profile. Based on this performance (and his previous military service), he now regularly dismisses security officials who disagree with him.

The elimination of terror and cessation of incitement in Palestinian schools.

Bennett has maintained that there is no partner in the PA, pointing to incitement. He continues to do so at every available opportunity.

Making clear to the international community that a second state west of the Jordan River is not viable.

Many folks were surprised by the strength of Bennett’s performance during the Saban Conference in Washington earlier this month. Bennett’s main calling card is that he fully rejects the two-state solution and wants to shift the conversation in a different direction. The cornerstone of his plan is the annexation of Area C and some sort of self-rule in Areas A and B. Gaza isn’t worthy of inclusion in his plan. The more he can get people to agree that the two-state solution is dead, the more he can claim that he is the only person with a path forward.

Advancing the immigration of one million Jews to Israel to secure a permanent Jewish majority in Israel.

Bennett rather enjoyed his position as Minister for Diaspora Affairs.  He was Chairman of Birthright and champion of the World Jewry Joint Initiative, a program designed to scale up the concept of Birthright and have Israeli tax-payers responsible for ensuring a strong Jewish identity within the diaspora. As I’ve written previously, the idea of having struggling middle-class Israelis subsidize the humongous costs of Jewish day school education in the States is a losing concept. More importantly, being a third-party funder will give the Diaspora Minster a say over Jewish educational content in the U.S. and will give Bennett a whole new platform — targeting a new generation — to continue advocating and advancing his one-state vision.

One million Jews in Judea and Samaria, tripling its Jewish population.

Though there was no formal settlement building freeze during this government, there were constant rumblings about an informal freeze outside the major settlement blocs. Bennett hopes to continue advancing his one-state vision through his annexation of Area C, which he will be in a greater position to do if he takes becomes Israel’s next Defense Minister.

Executing a construction, development and economic plan for the million Jewish Israeli residents of the West Bank.

The Defense Minister is the de-facto sovereign of the West Bank. Not due to any lack of effort, many of Housing Minister Uri Ariel’s initiatives never got approval from the Defense Minister under this government. It is no wonder that one of Bennett’s main anticipated demands from Netanyahu in the next coalition is being given the reigns to the Defense Ministry.

Over all, Bennett has done remarkably well. What has stood in his way has been the Supreme Court and his inability to get final approval for settlement projects in the West Bank. It is little wonder that he wants to push through the Jewish Nation-State bill, while insisting on the Justice and Defense portfolios as his price for ensuring Bibi’s return to Balfour Street in Jerusalem.

Whether or not Bibi gives him everything he wants, Bennett is riding high.

What of the any-one but Bibi coalition (AOBB)?

For the math to work for AOBB, either the ultra-Orthodox need to sit with Lapid (not a chance in hell) or Meretz needs to sit with Avigdor Liberman. With the role of the Arab parties still unknown (as they struggle with the Left to work out how, if at all, they should work together) they have been left on the outside, at best in a supporting role.

Thus the savior of the two-state camp (Avigdor Liberman) is a man who wants to transfer Arab citizens out of Israel, the implementation of which would mark the formal departure of the concept of coexistence from the two-state paradigm.

If Bennett has accomplished anything it is this: he has forced the two-state camp to rely on a party whose main plank is the transfer and disenfranchisement of Arab citizens of Israel.

Until the Left finds a way to include the Arab parties in their potential coalition, the result will be depressing and the coalition-building formula will mean that the two-state solution may no longer be worth the price.

Joel Braunold is the U.S. Director for the Alliance for Middle East Peace. He blogs for Haaretz regularly. He writes here in a personal capacity.

Related:
Bennett is not the problem
‘Anyone but Bibi’ isn’t the point: Pre-election postulations