It’s time to acknowledge that the paradigm based on the notion that ‘we are here and they are there,’ is no longer feasible. What’s needed is a shift from a separation paradigm to one of sharing.

By Riman Barakat and Dan Goldenblatt 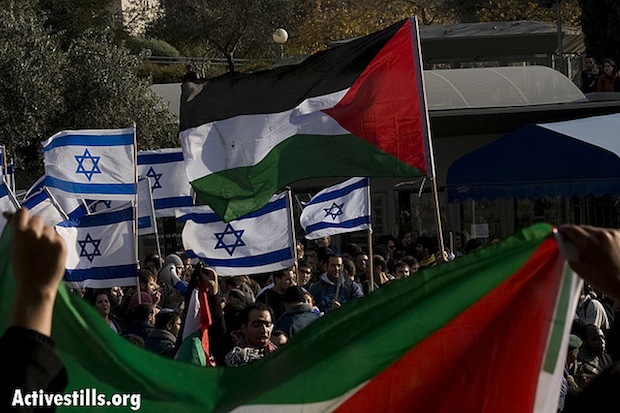 As President Obama’s arrives for a visit to Israel and Palestine, many Palestinians and Israelis do not anticipate any euphoric moments or breakthroughs with regards to the Israeli-Palestinian conflict. Beyond the list of actions and words that Obama will address with regards to Israel’s regional fears and the Palestinian concern that the two-state solution is no longer feasible, President Obama and Secretary of State John Kerry should have something to offer to a right-wing hawkish Israeli government, which is not likely to promote a two-state solution, and to a Palestinian Authority that is very close to collapse as its economic situation worsens. What is needed is for the United States to offer a slight but fundamental shift in the paradigm.

Almost 20 years ago, Yitzak Rabin, who shook hands with President Yasser Arafat on the White House lawn, called for a paradigm based on the notion that “we are here and they are there,” not a sharing approach. We argue for a shift from a separation paradigm to one of sharing. But there are several logical steps to go through before we switch paradigms:

1. Declaration of a Palestinian state and recognition by the US and Israel: What cannot be ignored or circumvented is that a Palestinian state must be established in order to grant Palestinians as a people their basic right to self-determination. Israel is the only Jewish state in the world and it must remain such. Any solution that will threaten the Jewishness of the State of Israel is doomed to fail. Two peoples who have been caught up in a national struggle for over a century cannot be expected to give up their national aspirations and leap into post-nationalism. A one-state solution is therefore a non-starter. Any solution must ensure that Israel maintains a Jewish majority and remains a democracy, and that the Palestinians establish their self-determination and sovereignty.

2. Acknowledge the fact that the separation paradigm is bound to fail: We ought to acknowledge that “we are here, they are there,” is not only no longer feasible, but fundamentally defies the emotional and deep connection that both peoples in the Land of Israel/Palestine hold to the land. On the one hand, all religious sites connecting Jews to the holy land are located in the West Bank/Judea and Samaria/Palestine. On the other hand, all the Palestinian refugees come from over 500 villages that were destroyed in Israel’s War of Independence in 1948 (known as the Palestinian catastrophe – the Nakba) that are located in today’s Israel. Any solution that does not account for these established historical connections is doomed to fail. This is probably the primary reason why all efforts, initiatives, road maps and accords have not succeeded in finding a solution that had buy-in from the Israeli and Palestinian public. Ideological settlers continue to lobby the Israeli government to build more settlements as long as they believe that their right to reside in the West Bank is threatened. Any Palestinian leader, no matter how popular, will fail to convince the Palestinian public to support a peace agreement that deprives Palestinians of the right to visit or reside in the coastal plains from which they came.

3. Propose a solution that will respect the sovereignty of both states while strengthening the sharing paradigm. Here we propose a formula of two states in one space.

The challenge lies in squaring the circle, in answering the needs of both peoples (not allowing the marginal elements to set the agenda), in putting forward a proposal that provides an acceptable solution to the key issues. We would also suggest a different list of priorities. The most important key issue must be freedom of movement. This has been proven through the continued failure of the process to date. The second is the human element.

Our premises, in addition to the two facts above, are:

A. Israelis and Palestinians who have been involved in a national conflict for over 100 years must each have a national sovereign state. Talk of a one-state solution is illogical. It asks Israelis and Palestinians to forgo their national aspirations and leapfrog over nationalism into a post-national era. We are seeing that this can barely be implemented in Europe. There is no chance it will hold in Israel/Palestine.

B. Israel is the only Jewish state in the world and it must remain such. Any solution that will threaten the Jewishness of the State of Israel is doomed to fail.

C. The Palestinians have already agreed that their state will be on 22 percent of historical Palestine and they will not agree to one iota less.

D. One cannot negotiate over how to divide a cake while one of the parties is eating the cake. This means a complete and total freeze of all settlements that are beyond the current built-up circumference of any settlement.

E. Contrary to common belief, we think that it is actually the human element, Palestinian refugees and Israeli settlers that are the key to resolving the conflict and not security and Jerusalem. Security and Jerusalem are very important, but the human aspect is the determining factor and if we can resolve it all else is relatively, easier.

Our ultimate goal is a sustainable peace based on two states living side by side providing freedom and human dignity to all the inhabitants of the land. In addition to the above observations, there are some additional factors that must, in our eyes, be considered and accepted:

The Palestinian side has little left to lose. Israel, on the other hand, has everything to lose. Israel is quickly slipping into a one-state reality that will leave it with a choice between granting Palestinians full human and political rights, and cease to be the only Jewish state in the world. The second option, which is much more likely, is that it will not give Palestinians those rights and it will become a de facto apartheid state, which will cease to be democratic.

If Israel seeks to merge into and become part of the region, it will be welcomed here. This has been voiced (and sadly completely ignored by the Israeli government), by the Arab League in the Arab Peace Initiative. The economic potential of becoming part of the region and thereby opening it up to trade, transport and tourism is beyond question. Most, if not all the problems can be solved. It will take commitment and dedication, time and patience, but it is undoubtedly possible. However, for it to succeed, we cannot keep pushing a failing strategy. Innovation, creativity and outside-the-box thinking, so important for any business in the world today, must be applied also to this conflict.

Riman Barakat and Dan Goldenblatt are Co-Directors of IPCRI – the Israel/Palestine Center for Research and Information.