A previously unknown blog caused an uproar in Israeli media, after publishing pictures of Prime Minister Benjamin Netanyahu in Nazi uniform alongside a text supportive of the J14 social justice protests. Left-wing bloggers believe this is a right-wing attempt to smear the protesters. 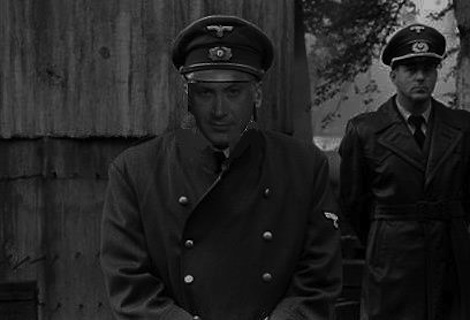 One of the inciteful photomontages published by the Civil Curfew blog (Author:Unknown)

Speculations continue to grow around the identities authors of a suspected sock-puppet blog that distributed pictures of Prime Minister Benjamin Netanyahu in SS uniform, ostensibly on behalf of the J14 social justice movement.

Left wing site Activismos traced the blog, which was taken down within hours of making headlines in Israeli media, to domains registered to  Likud activist Philipe Hubert. Hubert himself, however, said he merely provided hosting and platforms used to create the controversial content, has since sold these assets, and threatened to sue. Activismos pulled their post pending further investigation.

The picture above, alongside two others, first appeared on a blog named “Civil Curfew” on August 8, under a call for Netanyahu’s arrest. “The authors of the blog go to great lengths to connect themselves to the protest leaders,” journalist and blogger Itamar Sha’altiel reported on Activismos yesterday. “They claim they ‘represent the heart of the Israeli protest against the swinish capitalist government of Benjamin Netanyahu,’ and that they are ‘at the very core’ of ‘the immense civil curfew spreading across Israel…’ the blog was taken down soon after hitting the headlines in the mainstream media.”

Sha’altiel pointed out the term “civil curfew” was both oblique and highly unusual, and found it was first used a week ago, on a forum titled “Mizrachim against Israel,” by a user named “Shakshouka,”  a self-declared member of an organisation called “The Union of Mizrachim Against Israel – Deborah Salon.” He went on to say that the website of the Salon and a handful of other supposedly militant sites – “Mizrachim against Israel,” “Anarchists Without Borders,” “Biased Media” and “Pincers” – occupy a small group of domains all registered to Philipe Hubert. The platform operating the websites, ios.st, is also registered to Hubert – as is another website, Likudnik.co.il, one of the main unofficial websites for Likud activists.

The journalist went on to stress the suspiciousness of highly provocative websites presenting a militant and violent image of the Israeli left and being affiliated with a member of the Likud party. The Likud itself filed a complaint with the police against the “Civil Curfew” blog for incitement. Hubert told Walla today that he did indeed develop the technology used to create the controversial websites, but has sold it in 2008, and had no involvement with either the platform or the domain ever since. The current owner of the Ios.st platform, Nadav Gorlitzki, confirmed Hubert’s statement in an interview to financial daily Calcalist.

“I strongly deny the accusations and I intend to sue the bloggers,” Hubert himself told Walla. “It’s like accusing Mark Zuckerberg for involvement in someone opening an anarchist group on Facebook… Benjamin Netanyahu is a personal friend of mine, and I would never do anything to cause him any harm.”

Activismos called for a police investigation into the identities of the authors of the pictures and the “Civil Curfew” blog. It also removed Shaaltiel’s investigative post, citing the need for further inquiries, and published Hubert’s denial.