The IDF and Border Police killed three more Palestinians last week. Despite the IDF’s ‘knife in the back’ legend that it betrays its own, its combat soldiers have little reason to fear its ‘justice’ system. 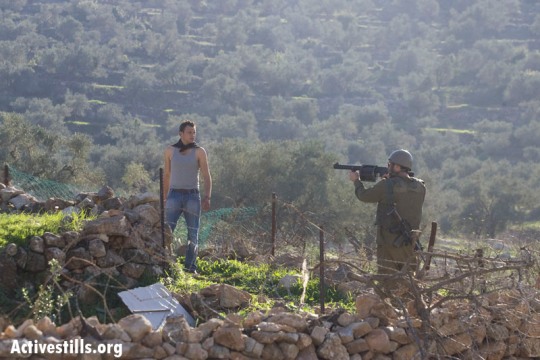 Anyone following the Israeli morning radio broadcasts is already accustomed to the mantra-like report of IDF soldiers arresting “wanted persons” during the night, and that they were “turned over for interrogation by the security forces.” Behind this short line, supplied to the reporters by the IDF Spokesman on the condition that they broadcast “out of their own mouths,” without attribution, stand the nightly operations the IDF carries deep in Palestinian-controlled territory.

At the beginning of last week, one of these operations went awry, and it ended with three dead Palestinians and more than a dozen wounded. As usual in such cases, the army was quick to claim that “the soldiers’ lives were in danger.”

We don’t know exactly what took place in Qalandiya Camp early last Monday morning, but this incident ought to be investigated, and investigated thoroughly – as in any case when a person is killed by security forces. When someone claims time and time again that he is in mortal danger, yet somehow keeps dodging it leaving bodies behind, one must wonder whether this isn’t a tactic intended to reduce judicial and media pressure.

There’s a long list of cases showing this is indeed the trend: my favorite example took place in March 2010 near Awarta. The facts are that when the smoke cleared there were two dead Palestinians lying on the ground. The soldiers claimed they were attacked by pitchfork-wielding Palestinians. That was also the first IDF Spokesman version: a terror attack was averted. Following an investigation, the soldiers were forced to admit (Hebrew) that the pitchfork was left on the ground. They claimed, however, that the force commander “felt in danger” after hearing one of the Palestinians “mumbling a prayer,” and hence he opened fire. One of the Palestinians, he claimed, tried to attack him with a bottle; the other, he said, tried to enter Palestinian mythology by coming at him, in a scene reminiscent of McGyver, with a syringe (!).

None of the soldiers involved in the Awartha incident was indicted. And as our factsheet shows (see the full document below), this isn’t an isolated case, it’s a method.

Any army, at least any army spending considerable amounts of time out of the marching grounds, will develop the legend made famous by defeated German generals, by the name of “knife in the back”: we could have carried out the mission, the army would claim, but evil politicians handcuffed us. The Israeli version of the legend mutated in the mid-1980s, when soldiers began claiming that “we can’t leave our base without a lawyer,” saying orders, regulations and the fear of a court martial handicapped them.

But, media manipulation aside, there is data. And the data smashes this legend to pieces. Between the years 2000-2013 the IDF and related forces killed, according to B’Tselem’s data, some 5,000 Palestinians. Some of them, of course, were killed in “normal,” non-suspect military circumstances, but according to B’Tselem’s data at least a quarter of the people killed were not involved in the fighting. We do not have data for the years 2000-2003, and data is also missing for 2010 (the IDF Spokesman who seems to have forgotten it is not the Chief of Staff’s personal PR flack but rather a public servant, refused to provide data for that year); but between 2003-2012, 179 cases were opened against soldiers suspected of the homicide of Palestinians. Abandoning the legal norm upheld until then, the Military Judge Advocate ordered at the beginning of the Second Intifada that no investigations of killings are to be held unless he specifically ordered otherwise. This is a self-sustaining system: when homicide is not investigated – and in the Western judicial tradition, which Israel wants to belong to, every killing by the authorities is investigated – naturally events do not come to the surface on their own volition.

Out of the 179 investigations the army opened, only 16 matured into indictments – and of these, only six ended in convictions related to homicide. Out of these, only one soldier served more than one year in prison: this is Taysir Hayb, who killed British activist Thomas Hurndall without any provocation. Hayb was convicted of manslaughter – not murder – and was sentenced to eight years in prison, which he did not serve in full (Hebrew). It’s important to note that Hayb had two factors against him: firstly, he killed a Western citizen, whose family refused to act as if nothing happened. A British inquest (which Israel, naturally, boycotted) found that Hurnfall was maliciously slain. Secondly, Hayb is not a Jew; he is a Bedouin. I dare to say, and the data backs me, that an ordinary Jewish soldier killing an ordinary Palestinian wouldn’t suffer such bad luck.

For what a court ruled was negligent manslaughter, Captain Zvi Koretzki was sentenced to two months imprisonment. Two officers convicted of negligence, after shooting up a vehicle in which a Palestinian toddler, Muhammad Jawadath, was sitting, and killing him, received, respectively, 30 days imprisonment and a four-month suspended sentence, and a month of work for the military and a four-month suspended sentence. Such is the price of a Palestinian toddler’s blood in the military justice system. A first sergeant convicted of “negligent manslaughter” and an attempt to obstruct the investigation received four-and-a-half months imprisonment and a similar suspended sentence; he was also demoted. Another NCO, convicted of “negligent manslaughter” – to wit, firing an assault rifle at the center of the body of a fleeing young man who was not endangering him in any way – was sentenced to seven months imprisonment, with the judge noting that “the effects of the event on the accused and his family were also a consideration when it came to sentencing, as did the operative and symbolic meaning of a demotion” (Hebrew). For in the grand scheme of things, what is the importance of a young Palestinian’s life, when weighed against ” the operative and symbolic meaning of a demotion?”

Yesh Din research department director Ziv Stahl commented on the shooting on Monday morning: “the data shows that practically, the chances of a soldier who killed a Palestinian civilian without justification being investigated, much less punished, are between low and nil. Such a reality encourages illegal use of arms by soldiers even in clearly civilian settings, such as demonstrations.”

Precisely. The “knife in the back” legend of the IDF is bogus. The soldiers do not need a lawyer in the field. They need, rather, officers who will direct them to only fire accurately and only when necessary, as well as a basic training in the ethics of using a firearm. The famous ruling of an Israeli court about a manifestly illegal order speaks of “illegality piercing the eye and upsetting the heart, assuming the eye is not blind and the heart is not blocked or corrupt.”

One suspects the heart is already corrupt.