One in five self-described ‘leftists’ support the actions of Elor Azaria, the Israeli soldier on trial for shooting a disarmed Palestinian attacker in the head. 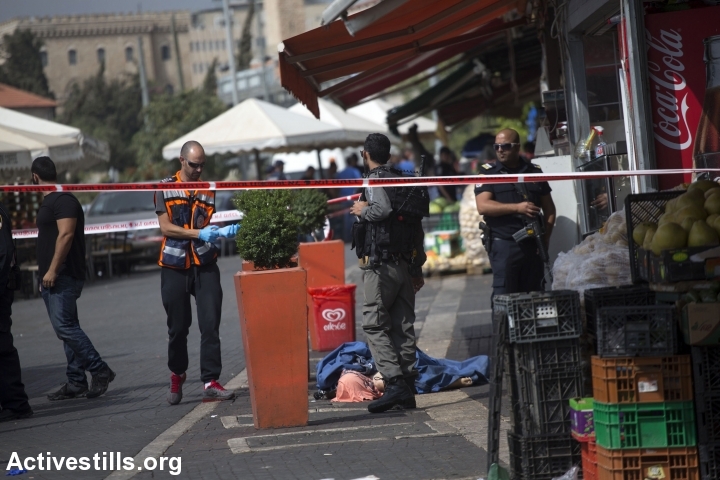 The body of a Palestinian teen is seen on the street near Damascus Gate, East Jerusalem, October 10, 2015. The teen, later identified as Ishaq Badran, 16, from Kafr Aqab, was shot and killed by Israeli police after carrying out an alleged stabbing attack in the area.(Anne Paq/Activestills.org)

Nearly half of Jewish Israelis support the extrajudicial killing of Palestinian attackers who no longer pose a threat, according to a poll released by the Israel Democracy Institute (IDI) on Wednesday.

Pollsters also asked Jewish Israelis about the specific case of an Israeli soldier who was filmed shooting a Palestinian attacker in the head long after he had been disarmed, wounded and no longer posed a threat. Sixty-five (65) percent of respondents said they feel the soldier, Sgt. Elor Azaria, was justified in executing the Palestinian man, Abed al-Fatah al-Sharif.

Sgt. Azaria is currently being tried in an Israeli military court for manslaughter. One of his main lines of defense has been that his actions, murdering a Palestinian attacker after he had been disarmed, does not deviate from the acceptable norms of behavior for Israeli security forces.

Azaria has enjoyed widespread public support since his arrest earlier this year, and his trial has become somewhat of a public spectacle. Just this week, Defense Minister Avigdor Liberman declared that he would “stand by” the soldier even if he is convicted.

The IDI survey was conducted by telephone at the end of August, included 600 respondents, and had a margin of error of ±4.1 percent.