After losing a lengthy legal battle against the state, residents of the unrecognized Bedouin village Sawa decided that demolishing their own homes is preferable to seeing the authorities do it.

On Tuesday of last week, the residents of Sawa, an unrecognized Bedouin village in the Negev Desert, used their own money to rent a bulldozer that would destroy seven of their own homes. For hours, one could hear the sounds of pounding hammers and a bulldozer driving back and forth, its blade full of pieces of what moments ago was someone’s home. 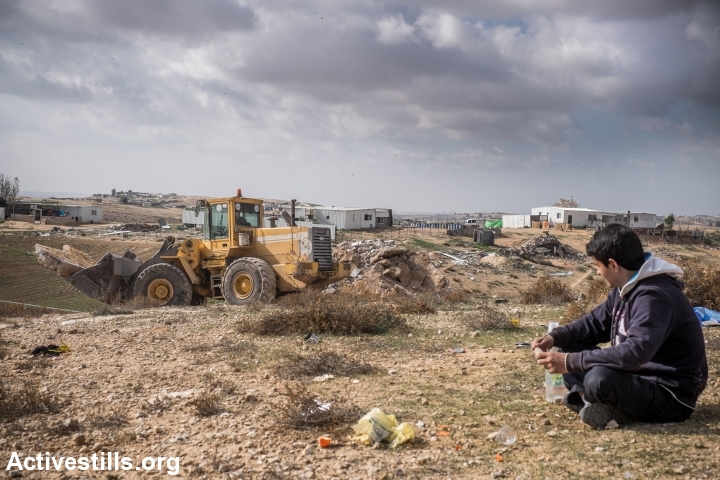 The residents of Sawa decided to destroy their own homes after a long legal process that began in 2007, when the authorities served three of their homes with demolition orders. The legal struggle failed, and after a number of delays in the demolition, the Be’er Sheva District Court ruled that the orders will not be rescinded.

While some of the families living in the village have lived there since before 1948, the families who received the demolition orders were actually forcibly removed from their lands in the north of the Negev and pushed into Sawa by the military government (which ruled over Israel’s Arab citizens from 1949 until 1966). Thus, whether they were ordered to leave their historical land by the military governor, or whether they hade been living in the village before the establishment of the state – the State of Israel does not recognize Sawa.

In 2000 IDF Chief of the General Staff Shaul Mofaz relied on the British Mandate’s Defense Regulations (1945) in order to declare the entirety of Sawa and other unrecognized Bedouin villages in the area a live-fire zone.

Large police forces along with inspectors from the Interior Ministry arrived at the village earlier this week, and told the residents that if they did not demolish seven of the homes chosen by the police, the authorities would do the job themselves.

Despite the fact that the families have been engaged in negotiations with the state for many years, the state offered no other solution and eventually pressured them into demolishing their own homes. Those whose homes were destroyed have no alternative housing, and will be resigned to living in close quarters with their neighbors until a decent solution is found.

“They forced me to destroy it,” Sawa resident Salama al-Qasisi told +972. “Who wants to destroy their own home and leave their children outside? This is not a democratic country. They see this as an act of weakness, but it is not weakness. The state has already destroyed three of my homes.” 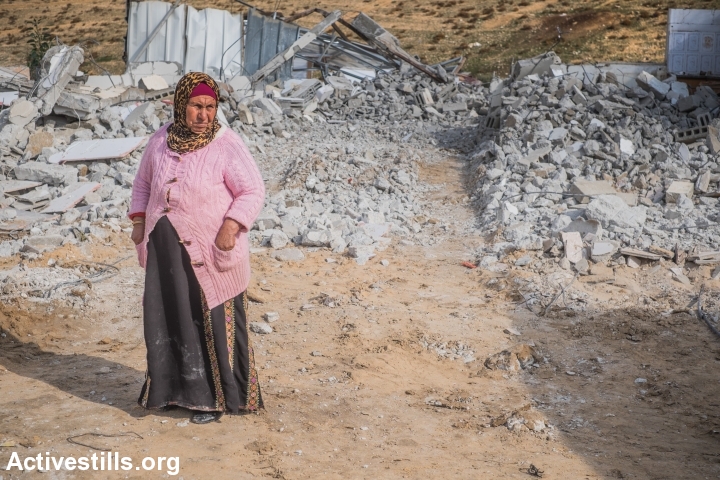 “We demolished it ourselves now because it is morning,” said another resident. “Our children are at school, so they won’t see the destruction. It is difficult to demolish our own home, but we don’t want our children to be frightened.”

The residents’ fear of state demolitions stems from the way in which they are carried out. They typically take place in blocks of several days, and the residents are not given prior notice. In fact, residents only find out that their homes are about to be demolished when they see long rows of police forces, bulldozers and inspectors arriving. Usually only women and children are in the village, and there isn’t enough time to remove items from the homes, which are then buried under the rubble.

Michal Rotem works for the Negev Coexistence Forum and is based in Be’er Sheva. This article was first published on +972′s Hebrew-language sister site, Local Call. Read it in Hebrew here.

Related:
In Al-Arakib, even the dead face eviction
PHOTOS: A life of discrimination for Negev Bedouin
Al-Arakib Bedouin’s ongoing struggle for their land