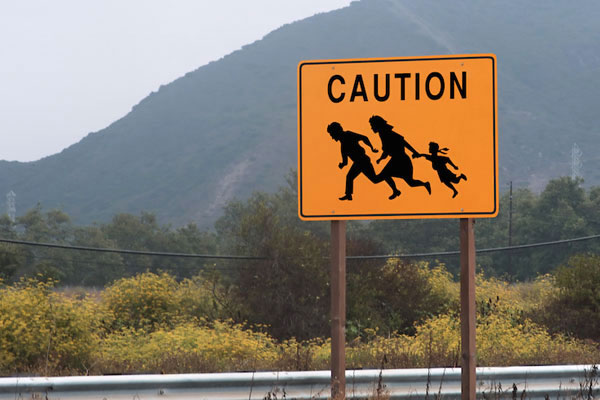 Sign warning of migrants near the U.S.-Mexican Border. (Photo by Shutterstock.com)

Of all the reasons Prime Minister Benjamin Netanyahu puts forth for why Israel needs a “Jewish nation-state” law, the most bizarre one is this: “There are those – including those who deny our national rights – who would like to establish autonomy in the Galilee and the Negev.”

Yeah, and there are those who would like to colonize Mars, and they will probably get there long before anybody establishes Arab autonomy in the Galilee and Negev.

This is another of Netanyahu’s endless supply of Arab scarecrows: we have to pass this cockamamie nation-state law or the Arabs are going to take over the Galilee and Negev.

Read also: Is the ‘Jewish nation-state’ bill good for anyone at all?

No surprises here; he’s built his career on scaring Jews about Arabs. But Netanyahu has a well-known parallel career as a pitchman to Americans, Christians as well as Jews, for the cause of Israeli Jewish chauvinism – and to get them on his side, he has been known to wave around a different ethnic scarecrow: a Mexican one.

In his 1993 magnum opus, “A Place Among the Nations – Israel and the World,” which was first published in English, he writes about what he calls the “Palestinian Principle.” He describes it as the idea that any ethnic minority has a right to carve out its own state on the land where it resides, regardless of the effect on the established surrounding state, and even if another state already exists where that ethnic minority is the majority. (At the time, Netanyahu was fighting against the Palestinian statehood campaign with the argument that “Jordan is Palestine.”)

After depicting the chaos that would ensue if the “Palestinian Principle” were applied in Europe, Africa and Asia, he writes on page 150:

The United States is not exempt from this potential nightmare. In a decade or two the southwestern region of America is likely to be predominantly Hispanic, mainly as a result of continuous emigration from Mexico. It is not inconceivable that in this community champions of the Palestinian Principle could emerge. These would demand not merely equality before the law, or naturalization, or even Spanish as a first language. Instead, they would say that since they form a local majority in the territory (which was forcibly taken from Mexico in the war of 1848), they deserve a state of their own. …

[This scenario] may sound farfetched today. But it will not necessarily appear that way tomorrow, especially if the Palestinian Principle is allowed to continue to spread, which it surely will if a second Palestinian state comes into being.

And that was only the mild, written version of Netanyahu evoking the Mexican peril for Americans to win their solidarity against the Arab peril in Israel. In person, he gets much uglier.

In April 2002 he spoke to a Dallas audience at an event sponsored by the National Center for Policy Analysis. Washington Post columnist Ruben Navarrette, Jr. wrote, “The idea was to get Americans to feel Israel’s pain. But, as a Mexican American in the audience, all I felt was nauseated.” Navarrette continued (h/t to Doug Chandler):

When asked for a historical overview of Middle East turmoil, Netanyahu mentioned how Jews migrated back to the Holy Land in the early years of the 20th century, set up farms and businesses and turned a desert into a desirable destination. So desirable that soon there were hordes of Palestinians trying to get in and enjoy the fruits of Israel labor. Then, Netanyahu turned to the crowd and offered this bit of sarcasm: “Now, you here in Texas wouldn’t know anything about this phenomenon.” …

Asked about why Israel is reluctant to allow Palestinians living in refugee camps to enter into Israeli society, Netanyahu mentioned security concerns but also said that a mass migration would “flood” Israel. “You know about this,” he said. “This is the reason you have an INS.”

However, this Dallas audience must have been a liberal Democratic one, not exactly Bibi’s crowd. Navarrette:

The good news is that, judging from the audience’s reaction, Bibi made a boo-boo. The ethnic pitch got no applause, only uncomfortable looks and nervous laughter.

My dear God, Mexicans in Texas, Arabs in the Galilee, the brown people are taking over: this is Bibi Netanyahu’s message to Americans and Israelis, his saviors of the free world.

He’s not only an Israeli Jewish xenophobe, he’s a wannabe American xenophobe, too. An old-fashioned white man, holding off the dark-skinned hordes.

Nightmare, he says? Given his attitude toward ethnic minorities, the nightmare is his vision of a “Jewish nation-state.”

Related:
Is the ‘Jewish nation-state’ bill good for anyone at all?
Bill aims to strip citizenship, curb speech — a bellwether of Israel’s Right
Israel’s UN ambassador puts another nail in the two-state coffin