From The Simpsons, to Seinfeld to Joe Biden, Israelis keep poking fun at their prime minister for his comments earlier this week, in which he seemingly absolving Hitler of responsibility for the Holocaust. (See part one.)

Israeli Prime Minister Benjamin Netanyahu shocked a good part of the population of earth when he seemingly absolved Adolf Hitler of responsibility for the Holocaust by saying the Grand Mufti of Jerusalem, Haj Amin al-Husseini, convinced him to initiate the Final Solution.

This is what Netanyahu said in his speech to the World Zionist Congress on Monday:

Hitler didn’t want to exterminate the Jews at the time, he wanted to expel the Jews. And Haj Amin al-Husseini went to Hitler and said, “If you expel them, they’ll all come here.” “So what should I do with them?” he asked. He said, “Burn them.”

The prime minister clearly wasn’t ready for what came next. Historians, commentators, politicians and even the chief historian of Israel’s official Holocaust museum, Yad Vashem, quickly pounced on Netanyahu’s revisionist narrative of the Holocaust.

Israelis aren’t known for shying away from Holocaust humor, or ridiculing their own elected officials, and an unending stream of Internet memes began sprouting throughout the various social media networks.

Yesterday we brought you what we thought were the funniest of the memes. But they kept coming. So, by popular demand, here are some more.

Most of the memes played on the excuse that “the mufti made me do it,” and a hashtag, #MuftiMadeMeDoIt, started trending on Tuesday. What better a symbol of shirking responsibility is there than Bart Simpson? 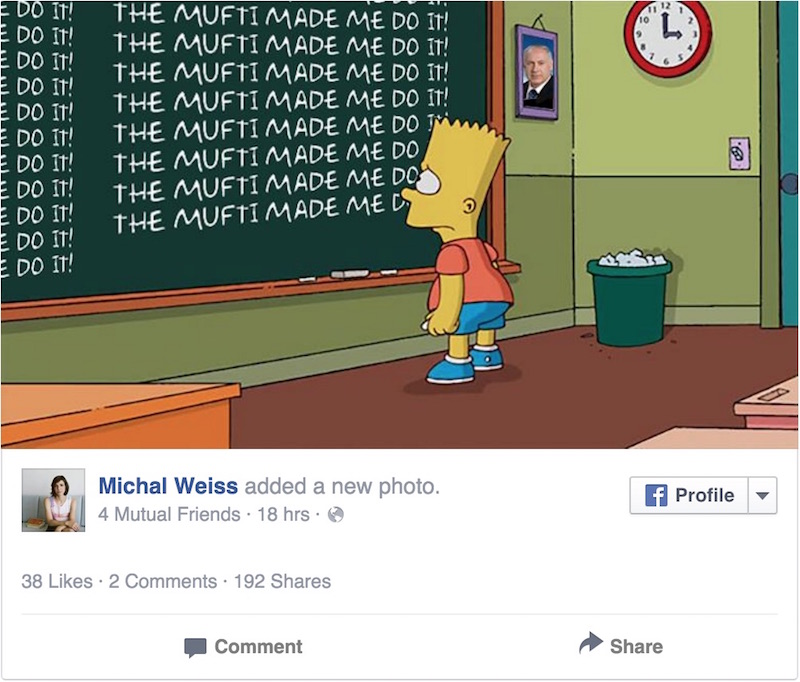 By midday Tuesday even the German government felt the need to responded to Netanyahu’s revisionist history, putting out a statement saying: “We see no reason to change our view of history in any way. We know that responsibility for this crime against humanity is German and very much our own.”

One Israeli tied in the current refugee crisis in Germany with Netanyahu’s Mufti comments. “If you expel them, they’ll all come here,” German Chancellor is portrayed as telling Netanyahu, who is currently on a visit to Germany. “So what do you propose?” Netanyahu responds, in the Hebrew-language meme. (Below) 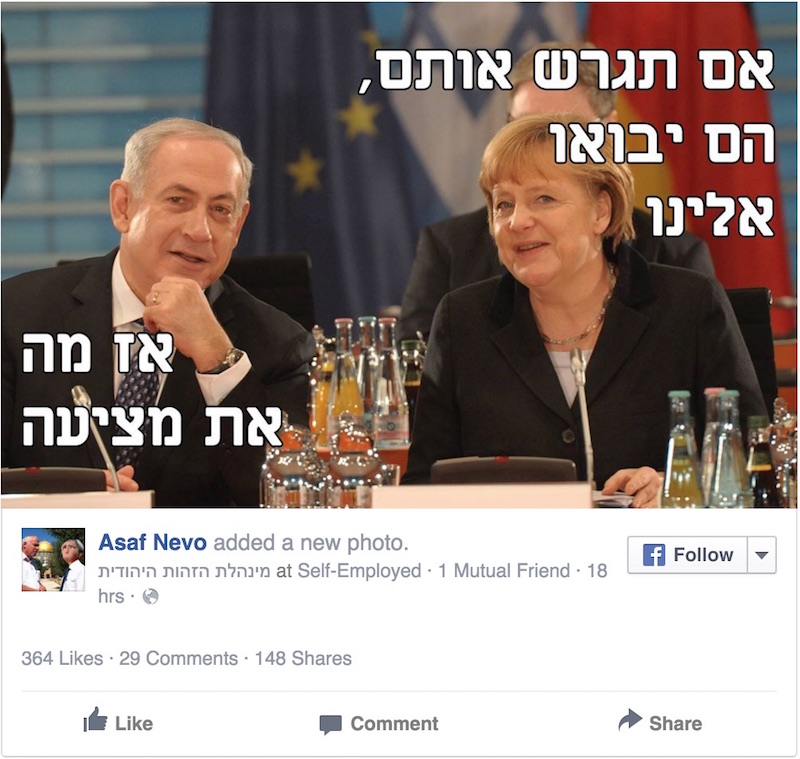 Of course there was the obligatory reference to Seinfeld’s Soup Nazi. 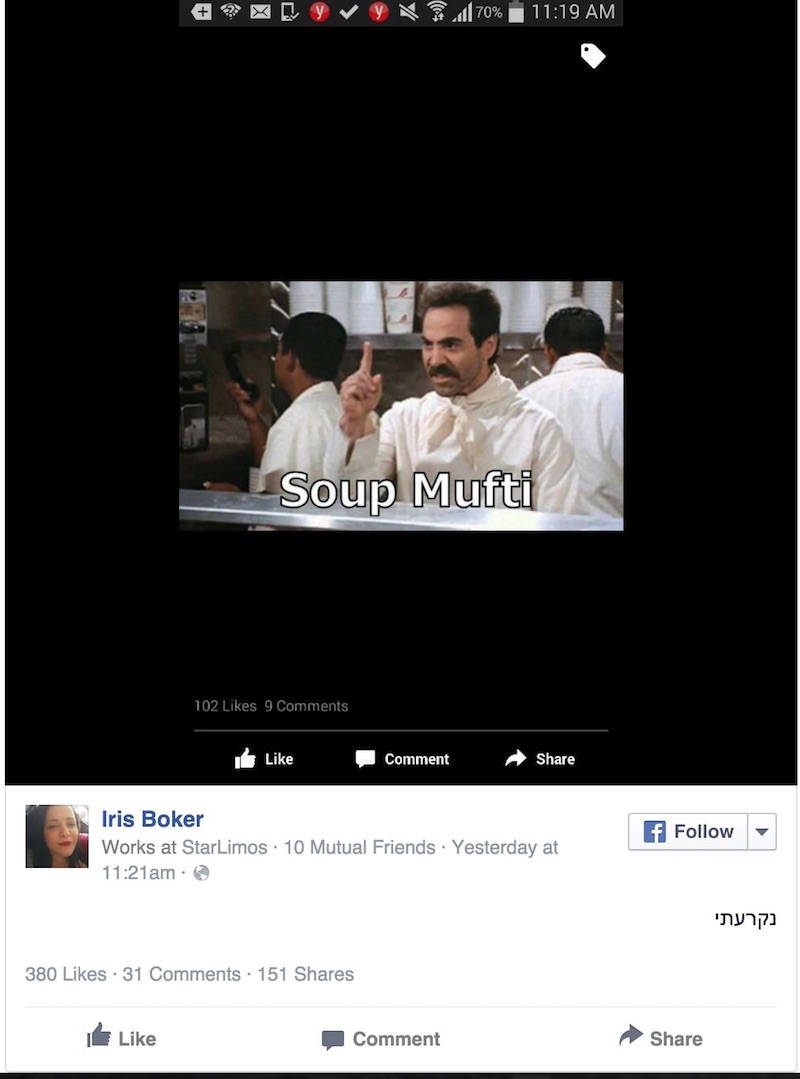 And another used a Hebrew-language educational program to mock Netanyahu, playing on the almost identically sounding Hebrew words for Holocaust survivor (right) and “Holocaust exploitation” (left). 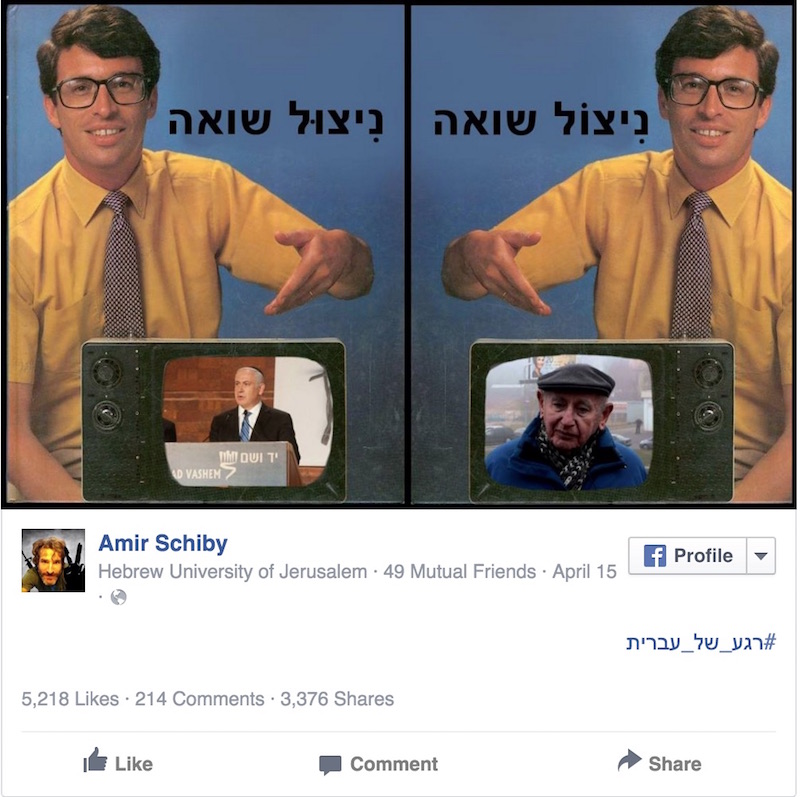 The day wouldn’t have been complete, of course, without a dig at Joe Biden’s announcement that he is not running for president.