By attacking the judiciary, bringing extremists into his coalition, and trying to subvert voting rights, Benjamin Netanyahu has presented a dark vision of an anti-democratic future for Israeli politics. 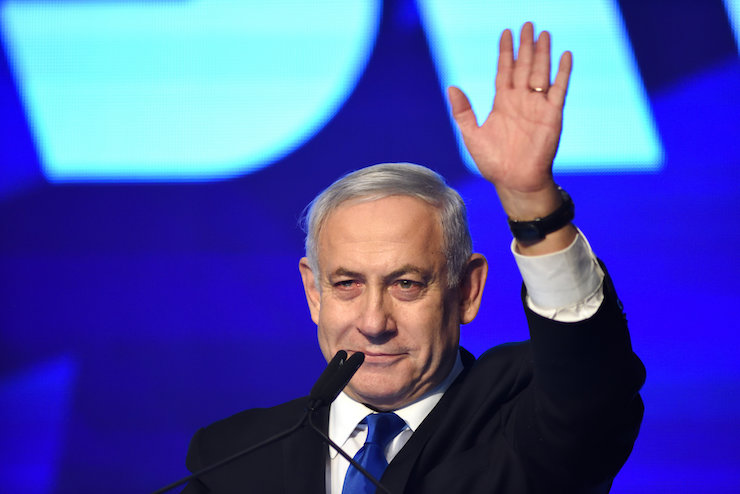 Benjamin Netanyahu emerged from September’s repeat elections a failure. Denied his desired majority, the prime minister’s only real hope of retaining power now depends on building a national unity government with Blue and White, a party that has pledged never to sit with him so long as the cloud of pending indictment looms over his head.

But the stakes of the election outcome are far higher than the political survival of one man. Throughout these last two rounds of forced elections, Israelis glimpsed an anti-democratic future – one controlled by a narrow immunity-annexationist coalition that would have protected Netanyahu as a man above the law. While Netanyahu failed to emerge with the majority required to enact that dark future, his irregular maneuvers over the course of the past two elections — attacking the judiciary, inviting extremists into his coalition, and undermining voting rights — upended a number of key democratic norms.

Elections as a legal ploy

First, let’s remember how we got here. Netanyahu’s 2018 decision to dissolve his government and call elections to be held in April of this year was a legal strategy intended to preempt, delay, and evade indictment on three open corruption cases against him. In so doing, Netanyahu exploited the tools of democracy to help him escape justice, seeking to strengthen his hand against prosecutors by renewing his mandate from the public, while pursuing a new government that would deliver a special law granting him immunity from prosecution.

Netanyahu and his Likud party emerged from the April elections with only a slight lead over his main opponents, Blue and White — a troop of ex-IDF generals led by former Chief of Staff Benny Gantz and the secularist former television anchor Yair Lapid. Netanyahu’s desperate efforts to assemble a narrow, right-wing government were thwarted by his hawkish former aide, Avigdor Liberman, who refused to join a government with ultra-Orthodox parties. Under Israeli law, when the frontrunner fails to form a government, the president should tap the next candidate who is likely to secure a majority in the Knesset.

But still facing corruption charges and denied a path to immunity, Netanyahu would not countenance his rival, Gantz, getting his due. Instead, he whipped the votes to have the Knesset dissolve itself, triggering new elections in September.

Netanyahu’s legal woes determined much of his wild electioneering throughout 2019’s two election campaigns. In February, two months out from the elections, Attorney General Avichai Mandelblit announced his intention to indict Netanyahu, pending a hearing. This sparked the prime minister’s Trump-like lashing out against the judiciary itself, and over the course of the campaign, he called the case against him a “witch hunt” and a conspiracy of the “left” designed to “to topple the right-wing government” which he led. He spared no vitriol in attacking the standard-bearers of justice — not just Mandelblit (whom he had appointed), but the state prosecutor, the Israel Police, and, of course, the media. Chief Justice of the Supreme Court Esther Hayut called his campaign against the judiciary “degrading, lowly and unrestrained.”

Netanyahu’s public assault on the judicial branch was coupled with a more insidious tactic. Knowing that the High Court would strike down any law designed to guarantee him immunity, Netanyahu sought something termed an “override clause.” The innocuous-sounding name belies its impact: the equivalent of a constitutional amendment, it would have allowed the Knesset to invalidate decisions by the High Court, effectively imbuing the state with near-dictatorial power. The proposal, which provoked uproar, was foiled by Netanyahu’s failure to form a coalition following the April election.

As his assault on the judiciary was ongoing earlier this year, Netanyahu continued trying to consolidate his right wing base. In February, fearing that votes would be wasted on smaller right wing parties that failed to cross the electoral threshold, he mainstreamed the most racist parts of the far-right camp by orchestrating the inclusion of the Jewish supremacist Otzma Yehudit party within a broad right-wing conglomerate. The leaders of this party are the ideological heirs and disciples of the American-born extremist, Rabbi Meir Kahane, founder of the quasi-fascist Jewish Defense League, who was barred from the Knesset for his flagrant racism.

In 2019, the Supreme Court ruled that a number of these Kahanists were also ineligible to run, based on their track records of incitement and racist provocation. Yet Netanyahu bestowed on them the legitimacy of his high office. 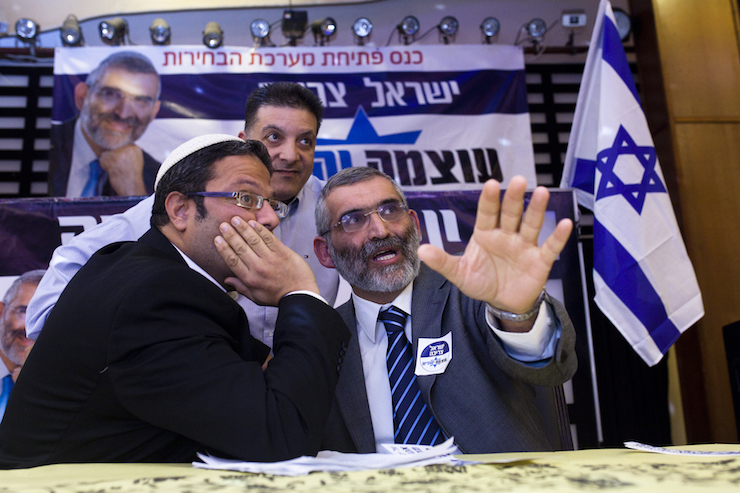 In September, Otzma Yehudit ran independently, without several of its disqualified leaders. Netanyahu, therefore, went out of his way to court the party’s voters, campaigning in the settler stronghold of Hebron, in the heart of the largest Palestinian city, on the anniversary of the 1929 Hebron massacre, an historical trauma that looms large in the political mythology of the settler movement. Netanyahu vowed to remain in Hebron “forever.”

Moreover, he announced on Israeli television that he was prepared to annex large swaths of the West Bank, without “annexing even one Palestinian.” Illustrating his plan with the aid of a map and salesman’s pointer, Netanyahu presented a proposal designed to foreclose any future peace with Palestinians and that would effectively formalize an apartheid-like situation in the West Bank, encapsulating isolated Palestinian enclaves within a sea of Israeli sovereignty. The move was strenuously opposed by his own security chiefs— but embraced by the far right base he courted.

Netanyahu’s fears were realized in the September rerun when Otzma Yehudit failed to clear the electoral threshold. But his open flirtation with racists is hardly wiped clear by those results. And with the growing prospect of a third election in March 2020, Netanyahu, having opened the gates to extremists, is bound to invite them back in the next time around.

Dovetailing with Netanyahu’s dangerous dalliance with Jewish extremism, his populist fear-mongering ahead of the September elections took a wrecking ball to the ethos of civic equality. Of course, right-wing scare tactics against Palestinians have a long history in Israel, abetted by the fact that Arabs citizens have faced discrimination in the country since its founding — not to mention Israel’s military occupation that controls the lives of millions of disenfranchised Palestinians in the occupied territories. But Netanyahu’s election-time incitement, which he debuted in 2015 when he warned supporters that “Arabs are coming to the polls in droves,” turned up the dial.

On Election Day in April, Likud sent 1,200 party activists with hidden cameras exclusively to Palestinian polling stations to intimidate voters, based on fabricated claims of widespread voter fraud among Palestinians. In the run-up to the September elections, entirely unsubstantiated claims that Arabs were going to “steal the elections” became the centerpiece of Likud’s campaign. Days before the election, a ‘chatbot’ on Netanyahu’s Facebook page captured the potent subtext of the campaign, telling Likud voters that if they didn’t go out and vote, “the Arabs will annihilate us, men, women, and children.” 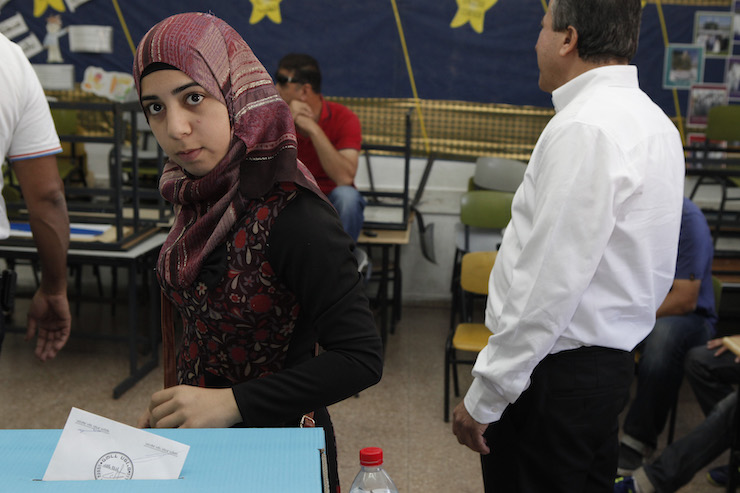 Palestinian citizens of Israel cast their votes at a polling station in the Arab village of Kfar Kassem, October 22, 2013. (Flash90)

A few weeks before Election Day in September, the Central Election Commission prohibited the use of surveillance technology at the polls. Netanyahu then tried — and failed — to force through special legislation authorizing this voter suppression tactic. To be sure, this campaign maneuver was aimed at instilling fear in the right-wing base.

But building up a false narrative of widespread voter fraud served another purpose: laying the groundwork for undermining the legitimacy of the election results themselves, as a pretext for disputing an unfavorable outcome. As Americans know too well, calling free and fair elections “rigged” is playing with fire. Democracy requires that political adversaries commit to the orderly transition of power. When populists scorn the rules and sow doubt about the fairness of the electoral process, they foment resentment, breed distrust and can uncork violence. Thankfully, while Netanyahu laid the kindling, this fire never got started.

Yet the September Election Day rhetoric saw further dangerous escalation: Israeli citizens received race-baiting “robocalls” from Likud warning about high turnout “in the Arab sector and leftist strongholds.” Netanyahu took to the streets of Jerusalem to “warn” his base of a high Arab voter turnout. Likud’s ministers continued to characterize Arab political representation as illegitimate.

In his election-night speech before Likud party activists, Netanyahu told the crowd that the leaders of Israel’s Arab-majority parties “praise and glorify bloodthirsty terrorists who murder our soldiers, our citizens, and our children.” His purpose was clear: to discount the votes of one fifth of the electorate.

These politics of fear did not prevail outright at the polls. But Netanyahu’s poisoning of the democratic discourse will continue to pollute Israel’s democratic culture.

Equally dangerous, but essentially overlooked, was Netanyahu’s foiled attempt to launch a major military operation in Gaza on the eve of the election. The prime minister wanted to use the escalation in order to request a delay in the election, though his entreaty was overruled by the chairman of the Central Election Commission, Justice Hanan Melzer.

Fabricating an emergency to affect a domestic election is a staggering abuse of power, and a manipulation that was narrowly avoided only due to the forceful intervention of the attorney general, who demanded the prime minister refrain from unilaterally declaring war without convening his security cabinet in person to approve the action.

Israelis might have been able to breathe a brief sigh of relief after the second election of 2019. Netanyahu was denied a full-fledged majority to fulfill his most anti-democratic vision for Israel’s future government, premised on territorial annexation and immunity for the prime minister. But this election has produced no clear path to a coalition — only a strange situation in which each contender, Netanyahu and Gantz, is daring the other to first try, and fail, to assemble a coalition. In a few months’ time, Israelis may indeed find themselves in the midst of a third election.

This fog of uncertainty must not cloud our assessment of what transpired over the course of these two elections. Authoritarian populists operate by moving the goalposts on what constitutes a violation of our democratic norms. It is vital that we take stock of the damage done. These blows — Netanyahu’s attempts to defang the judiciary, bring Jewish supremacists into government, incite against Palestinian citizens, and cast doubt on the integrity of elections — leave a lasting mark. And if Benny Gantz ever gets his chance, his mandate will be quite clear: to build Israel’s character as a liberal democracy and heal the wounds left by Netanyahu’s brass-knuckle blows to Israel’s democratic norms. Whoever is the next custodian of Israel’s government will have their work cut out for them.