Despite criticism at home and even from Defense Minister Barak, Netanyahu doubles down against the American president, on the eve of a close election. 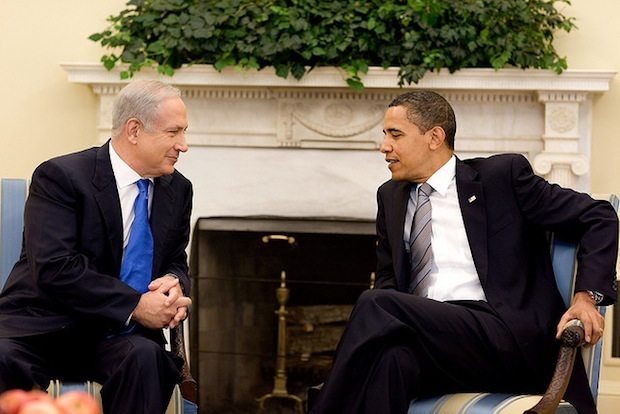 The public rift between the American administration and Israel is deepening: earlier today, Israeli Prime Minister Benjamin Netanyahu launched an unprecedented attack against the administration, stating that “the world has no right to stop us” (from attacking Iran). It was clear that the quote was directed at President Obama and Secretary of State Clinton, as Netanyahu was referring to the American refusal to declare a “red line” that would lead to an American strike on Iran if crossed. Later – as a result? – it was reported that the White House refused Netanyahu’s request for a meeting with the president.

The Israeli prime minister’s comments on Tuesday weren’t accidental – they were made in English and later sent to the press over email:

So far we can say with certainty that diplomacy and sanctions haven’t worked…Iran knows that there is no red line, if Iran knows that there’s no deadline, what will it do? Exactly what it’s doing: It’s continuing without any interference towards obtaining nuclear weapons capability and from there nuclear bombs. The world tells Israel: Wait. There’s still time. And I say: Wait for what? Wait until when? Those in the international community who refuse to put red lines before Iran don’t have a moral right to place a red light before Israel.

This evening, it was reported that the White House has refused a request by Netanyahu for a meeting with the president. The prime minister plans to travel to speak before the United Nation’s General Assembly later this month. This would be the first time the president has refused an Israeli request for such a meeting, and it comes only two months before an election in which the Jewish vote is expected to play a major role (at least in Florida).

See 2ed Update at the bottom of this post, following a phone call from the president to Netanyahu last night.

This is big news. My guess is that the administration is extremely frustrated with what seems like Netanyahu’s blunt support for and even coordination with Republican nominee Mitt Romney. Also, after the schooling Netanyahu gave the president in the Oval Office in a previous meeting, it seems that avoiding a meeting altogether would actually be safer for the president. At the same time, I hope that the administration is not threatening with an empty gun (again). If Netanyahu ends up going to the White House, he will score points in public opinion here and help the GOP. Following a visit last year to Washington, Netanyahu surged in the polls in Israel, and now we are getting closer to the election. Israeli sources have already told Maariv that they believe the prime minister will ultimately get the White House meeting he has requested.

UPDATE: The White House has denied the existence of a rift between the leaders, and claims that the absence of a meeting is because the two men won’t be in NYC at the same time. Netanyahu, it was added, will meet Secretary Hillary Clinton during his visi‬t.

There is also the expected political fallout in Israel: earlier today, opposition leader Shaul Mofaz criticized Netanyahu for “shoving his hands too deep in the American polling booths… Netanyahu should win against Ahmadinejad, not Obama,” said Mofaz.

As I wrote here a few days ago, Netanyahu’s coalition partner, Defense Minister Ehud Barak, who enjoys good ties with the current administration, is also splitting from the prime minister on this issue. Today, Barak warned that “differences with the United States should be discussed behind closed doors” – another message intended to create a distinction between the two Israeli leaders in the minds of centrist voters in Israel, and perhaps also in the eyes of Americans.

I don’t remember any time in history when Israeli politicians were so deeply involved in internal American politics.

UPDATE II: During the night, President Obama called Prime Minister Netanyahu and the two held an hour-long talk. According to the Israel media, the president gave new assurances on the American commitment to prevent Iran from getting a nuclear bomb.

So what just happened? How come the president refuses to meet Netanyahu, but then calls him? Looking back, it could have all been a spin coming from Jerusalem. The White House might have rejected the request for a meeting on genuinely technical grounds (with the personal suspicions between the two sides playing some role). Then, the prime minister office leaked this to the local press in Israel, suggesting that the Americans have thrown Israel under the bus, again.

US informed several capitals no Obama bilats w/ foreign leaders in NY. Netanyahu gov’t only 1 that leaked turned down, US official tells me

The phone call was probably an effort by the president to contain the danger to the campaign from the way the story was presented in Israel. Further proof to this theory can be found in the morning papers in Israel, which went to print before the phone call was made. Sheldon Adelson’s Israel Hayom, which usually echoes the prime minister’s line, makes it clear that the United States snubbed the Israeli prime minister. A “high level source” at the prime minister office is quoted as saying that:

There won’t be a meeting despite the fact that we made it clear to the White House we want one, and […] Netanyahu was to travel to Washington to meet the president. We got a message that the president’s schedule doesn’t allow a meeting.

So either someone read the American response wrong in Jerusalem, or the Israeli prime minister set another trap before the administration. You pick your theory.