Netanyahu looms so large that he has become a symbol of everything that’s right and wrong with Israel. But behind the symbol stand two very substantive visions of where Israel is headed. 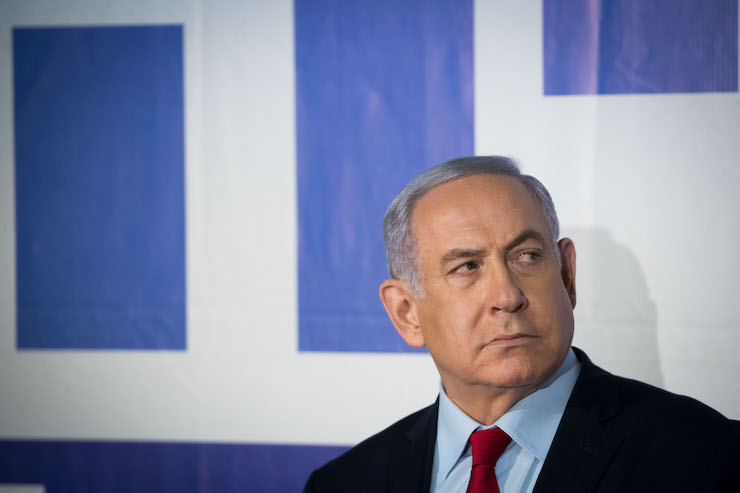 Israeli Prime Minister and head of the Likud party Benjamin Netanyahu seen after delivering a statement to the media at the Prime Minister residence in Jerusalem on March 20, 2019. (Yonatan Sindel/Flash90)

Like most weeks over the last decade, this was a week of Netanyahu. It began on Saturday evening when the prime minister gave a rare, surprise live television interview on Channel 2. The interview was his first to a mainstream Israeli media outlet in four years, guaranteed to make news for that reason alone. From there he flew to Washington to receive a prize from President Trump: American recognition of Israeli sovereignty over the Golan Heights, which Netanyahu called a “Purim miracle.”

When a surprise rocket attack from Gaza sparked potential escalation, Netanyahu made the surgical calculation to stay in Washington just long enough to keep his meeting with Trump, then flew back to Israel. His challengers were left at the AIPAC conference in Washington, looking much less important. As a ceasefire took hold, Netanyahu’s supporters praised him for avoiding a war. But had there been one, they prefer Bibi to be at the helm. It’s hard to avoid the feeling of determinism: Heads he wins, tails his opponents lose.

For his supporters, everything good is due to Bibi — from the Israeli moon mission and Eurovision, to wars fought and wars averted. For the opposition, Netanyahu is the source of anti-Arab race-baiting, the normalization of corruption in politics, democratic erosion, the creeping annexation of the West Bank, and the end of the two-state solution.

Netanyahu has become the national prism for each Israeli voter, supporters and opposition alike, to credit or blame him for everything. The campaign is often described as a referendum on Netanyahu.

However, the idea that Netanyahu is the master of all things bad or good is another myth that it’s time to bust. First, it’s not true. Second, the idea that it’s all about him is dismissive and unfair to the pro- and anti-camps in Israeli society; in other words, disparaging to the general public.

As for all those seething at Netanyahu’s leadership on the Israeli-Palestinian conflict and internal issues, it’s time to put his actual influence into perspective.

It was Labor, not Likud, that led Israel during the Six-Day War, and Labor built both the infrastructure of the occupation and the settlement project, until it lost power a decade later. Every time it won the leadership again, Labor expanded settlements at a rapid clip, just like Likud governments. Labor leaders may have put in more effort to resolve the conflict, but the entrenchment of the settlements and occupation under Labor helped to erode the two-state solution at the very same time. 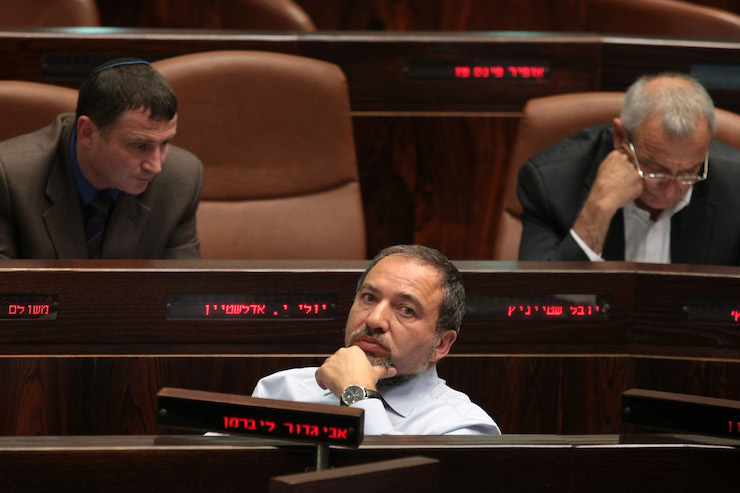 Israeli politician Avigdor Lieberman looks on as he sits in the plenum of the Knesset in Jerusalem on April 6, 2009. (Kobi Gideon/Flash90)

And where does race-baiting start in Israel? Meir Kahane may have advocated the transfer of Arabs in the 1980s but Avigdor Liberman would propose a sanitized version of transfer in 2004. Liberman’s plan is a “land exchange” proposal which would effectively strip citizenship from a large number of Palestinian-Arab citizens, and he continues to advocate the idea. Liberman’s aggression toward Arabs fueled his rise and culminated in his 2009 campaign slogan, “no loyalty, no citizenship!” His party won 15 seats that year, a victory for racist politics unrelated to Netanyahu. In fact, Netanyahu’s Likud likely jumped into the race game to win back voters who defected to Liberman.

Even Netanyahu’s shift away from the liberal democracies of the world to cultivate a new clique of authoritarian allies is not new. I have argued that the implications are dire in the present, but Labor governments led the charge: befriending Ceausescu of Romania, supporting Idi Amin’s coup for power in Uganda, and selling arms to South Africa under apartheid.

Netanyahu deepened and accelerated all of these developments, but he didn’t introduce them, and it’s hard to imagine that they would be absent without him.

Moreover, if voters experience the campaign as a referendum about Netanyahu, they invariably loathe the other side – whoever it is – for its position on Netanyahu rather than focusing on the issues at stake.

Those opposed to Bibi believe his supporters are blind worshippers to a cult of personality. This patronizing attitude tends to end badly; it is the likely culprit behind ethnically charged insults left-leaning cultural figures are prone to dropping against Likud voters. Several such incidents against Mizrahim over the years have had deep reverberations. They perpetuate the notion of racist Ashkenazi elites and embattled Mizrahim who must stand their ground. Perhaps it’s hard not to insult people when deep down you actually view them as stupid.

The mirror image among Netanyahu supporters is the idea that the opposition is driven exclusively by an irrational, tribal antipathy for Bibi: that anti-Bibi forces are united only in their pathological hatred but stand for nothing. The campaigns of Blue & White and Labor do little to dispel this image, with flat platforms and campaigns that emphasize political strategy over substance. That allows Netanyahu supporters to dismiss any legitimate criticism of the politics Netanyahu has come to represent.

The fact is that Netanyahu’s supporters believe in what he has done. They do not want a two-state solution, they feel victimized and embattled by the traditional Israeli elites, they support constraints on liberal democracy, they approve of restrictions on the Supreme Court; they believe there should be limits to political criticism, and they are thrilled about the new foreign friends.

On the other side, the opposition – about half of Israelis – does not represent blind hatred. They actually prefer to end the Israel-Palestinian conflict with a two-state solution, wish to protect the Supreme Court, believe in the need for a critical media to hold the government accountable, and desire a liberal democracy or even a progressive society.

Netanyahu looms so large that he has become a symbol of everything that’s right and wrong with Israel. But behind the symbol stand two very substantive visions of where Israel is headed.

This article previously had the headline “Netanyahu is not responsible for everything wrong with Israel.”