Netanyahu understands that keeping Hamas in power comes at a heavy political price. But as long as it thwarts the possibility of a Palestinian state, it’s worth it for him. 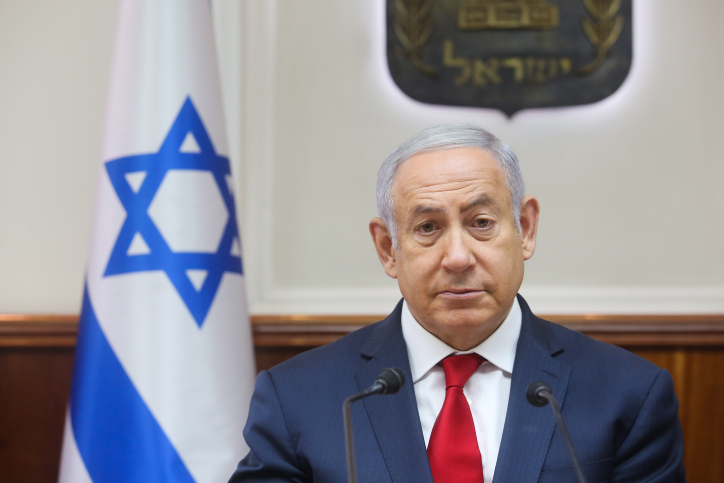 Weak. Giving into to terror. Those were the words Avigdor Liberman used to describe Prime Minister Benjamin Netanyahu during his press conference on Wednesday announcing his resignation as defense minister. The severe remarks came a day after Netanyahu agreed to a ceasefire with Hamas, following the most violent flare-up on the Gaza border since the 2014 Gaza war.

Liberman’s resignation, first and foremost, stems from political considerations. With elections approaching as early as March 2019, he understands the political value of appearing as someone who did not give in to Hamas. Following the almost-war in Gaza earlier this week, he recognizes that Netanyahu is now being perceived by the Israeli public as a coward, and he wants to exploit the moment to its fullest.

Liberman is not alone in bashing Netanyahu. Hundreds of Israelis demonstrated in the southern city of Sderot on Tuesday, burning tires and chanting “Bibi, go home!” Education Minister Naftali Bennett called the cabinet’s decision to accept an Egyptian-brokered unacceptable. This is nothing new: already since the 2014 Gaza war, Bennett has been trying to portray Netanyahu as a faltering leader who lacks the courage to “do the right thing” — that is, bring down Hamas.

And it wasn’t only right-wing politicians who tried to present Netanyahu as weak. Zionist Union leader Avi Gabbay and other centrists took turns attacking the prime minister. Even former Prime Minister Ehud Barak joined the fray, saying “Netanyahu went bankrupt and surrendered to Hamas under fire.”

Haaretz columnist Gideon Levy decided to see Netanyahu’s apprehension in a positive light, calling him a “man of peace.” His article was written a few days before the latest flare up, but one can assume that the cease-fire with Hamas only strengthens his thesis. Levy reminds readers that in 12 years as prime minister, Netanyahu had only gone to war once, in 2014’s Operation Protective Edge. Former Prime Minister Ehud Olmert, on the other hand, waged two major wars in two years. Netanyahu, Levy writes, is one of the most “anti-war prime ministers we have had.” 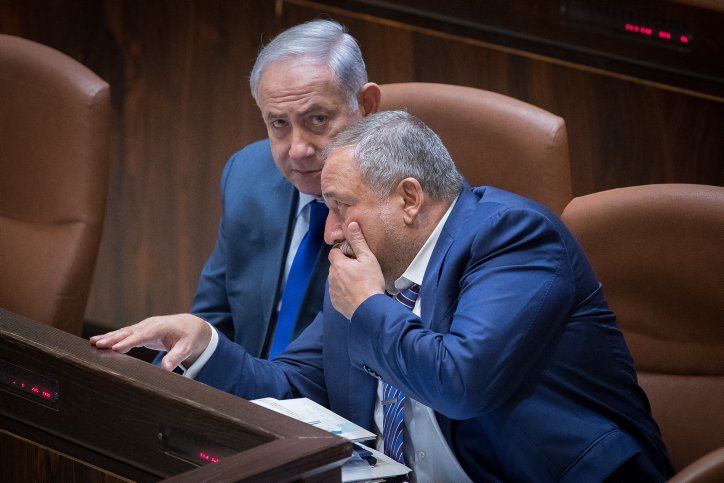 But both the criticism of Netanyahu’s cowardice on the one hand and the praise for his moderation on the other miss the point entirely. Netanyahu is an ideologue of Greater Israel. From his first rise to power in 1996, and certainly since his return in 2009, Netanyahu has had one main goal: to thwart the establishment of an independent Palestinian state between the Jordan River and the sea.

Netanyahu sees this as his historical duty, a mission handed down from his father, who, in turn, received it from Ze’ev Jabotinsky, the father of Revisionist Zionism. In the Land of Israel, Netanyahu believes, only Jewish sovereignty is allowed; preventing the creation of another, “foreign” state is not only necessary for the survival of the Jewish people, but for all of Western civilization. The Jewish Nation-State Law is only one, recent example of this ideology.

Netanyahu is no fanatic — he knows that the international community will not accept the annulling of the Oslo Accords, the dismantling of the Palestinian Authority, and the annexation of the West Bank. Even under Trump, the most pro-Israel U.S. president to date, the international community will not legitimize steps that seek to do away with Palestinian sovereignty.

What Netanyahu needs is time. He hopes to freeze the peace process — any peace process — while expanding the settlement enterprise. By establishing settlements as facts on the ground in the West Bank and East Jerusalem, he hopes that, already in a few decades, Israel will become the exclusive sovereign of the land.

Netanyahu’s attitude toward Hamas must be seen in this context. The prime minister backed down from war and from toppling the regime, not because he is deterred by violence and a demonstration of power, but because the drums of war beat loud. Netanyahu does not shy away from power. On the contrary — he believes power is more important than morality. “Nations respect morality up to a known limit, and they respect power much more,” he said only days ago at a Likud faction meeting. 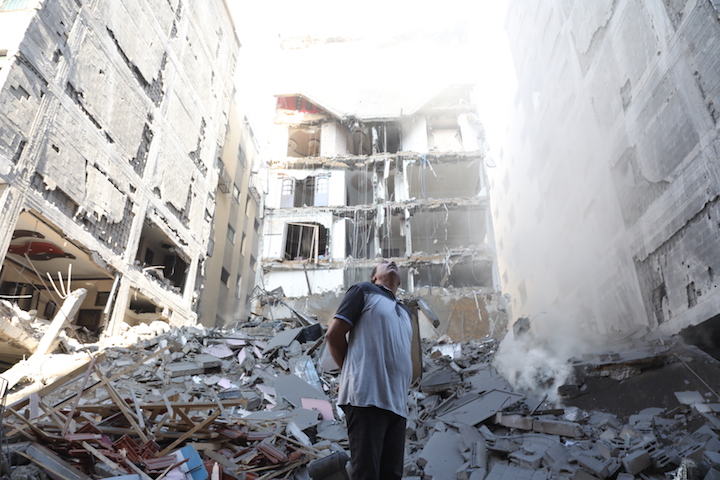 Palestinians look on at the remains of the Yaziji building in Gaza City, following air strikes by the Israeli Air Force. Yaziji served as both a residential and commercial building, and was home to around 40 families, November 13, 2018. (Mohammad Zaanoun/Activestills.org)

But dead Israeli soldiers in Gaza and thousands of Palestinian civilians killed are a source of commotion. Occupying the Gaza Strip is a political earthquake — it means attracting the world’s attention to the Palestinian issue, to Israel’s military rule of millions of Palestinians, and to the fact that the peace process is defunct. This kind of attention is the last thing Netanyahu wants.

There is also a deeper issue at hand. Although Netanyahu “inherited” the political divide between Hamas in the Gaza Strip and Fatah in the West Bank when he became prime minister again in 2009, in his eyes, this chasm is a major asset. Since the early 90s, Israel sought to split Gaza from the West Bank by denying entry permits, imposing a closure, and then besieging the Gaza Strip.

The idea was that, in separating the two Palestinian entities, Israel could curtail the PLO’s claim for statehood. The fact that the West Bank and the Gaza Strip are run by two different Palestinian governments is a political gold mine for those who want to prevent the establishment of an independent Palestinian state. Netanyahu, as we have seen, stands firmly behind this plan.

In his eyes, maintaining the Hamas regime in Gaza is a strategic priority, and any development that could lead to an independent state in Gaza, cut off from the West Bank, is a positive one. If Gaza turns into an independent “emirate,” as some right-wing politicians imagine, it will be the final blow to Palestinian President Mahmoud Abbas — or anyone who succeeds him in representing the Palestinian people. 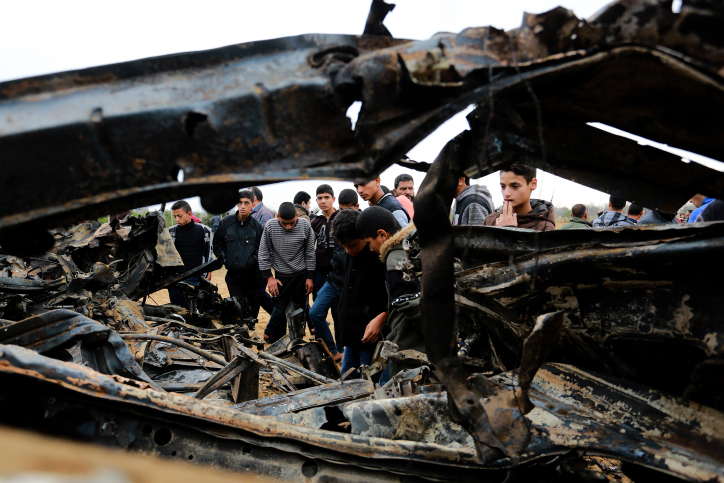 Palestinians stand next to the remains of a car destroyed during fighting between Hamas militants and Israeli special forces in Khan Younis in the Gaza Strip, November 12, 2018. (Abed Rahim Khatib/Flash90)

It is this thinking that lies behind Netanyahu’s sudden “worry” for the rehabilitation of Gaza, which also explains why he allowed Qatar to deliver $15 million to the Strip, intended for Hamas officials only. If Israel re-occupies Gaza, Israel will eventually have to hand power over to Abbas and the Palestinian Authority, which will only strengthen the PA’s political position — an outcome Netanyahu is adamant to prevent.

Hamas understands Netanyahu’s conundrum better than anyone. It knows that the prime minister has no intention to topple the regime, which is precisely why it allows itself to launch hundreds of rockets into Israel. It knew Netanyahu would eventually agree to the ceasefire. Hamas took advantage of Netanyahu’s position to claim a political victory for itself in the last escalation, while exposing the Israeli leader’s weakness.

Netanyahu is likely aware of this trap himself, but, ultimately, he believes preventing the creation of a Palestinian state is a worthy goal, even if it comes at a political price. This time around, the price was especially heavy: it is likely that Liberman’s resignation will lead to early elections and end Netanyahu’s fourth government, which, until recently, appeared especially stable. It would be ironic if Hamas, which Netanyahu has helped preserve and protect from Abbas’ threats, brings an end to his rule.