The new satellite station, ‘Palestine 48,’ aimed at Arab citizens of Israel, presents an opportunity to use the community as a bridge between Israel and Palestine, a member of its board says. 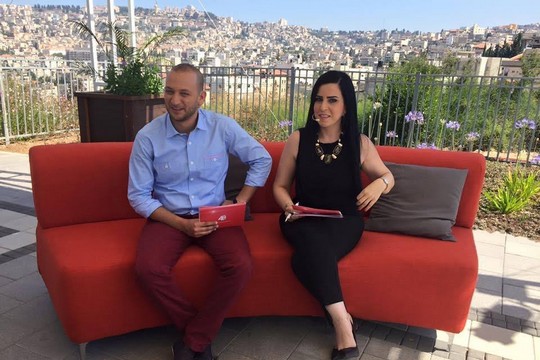 Israeli Communications Minister Benjamin Netanyahu on Wednesday declared his intention to shut down a brand new television station, “Palestine 48.” A day later, its employees and management vowed that they would not fold so easily. The station began pilot broadcasts on Thursday morning from Nazareth, and for the time being, its launch schedule is proceeding as scheduled.

Israeli authorities — and the Netanyahu government in particular — have been targeting Arab cultural institutions in recent weeks, cutting off funding for an Arabic-language theater in Haifa and threatening to do the same to a children’s theater in Jaffa operated by an Arab actor.

According to Sanaa Hammoud, a member of Palestine 48’s advisory board, the Netanyahu government is in the midst of a campaign to silence and exclude 20 percent of Israel’s citizens, ultimately de-legitimizing their citizenship itself.

But in addition to the principled issue, Hammoud warned, the government’s campaign endangers the constitutionally protected freedoms of occupation and expression. (While Israel does not have a constitution, it has “basic laws,” which have constitutional standing.)

“If anybody is violating the law,” Hammoud added, “it is not us — it’s Netanyahu.”

A promotional advertisement for Palestine 48:

Palestine 48 is a niche television station aimed at Palestinian citizens of Israel (inside ’48 borders, hence its name), operated by the Palestinian Broadcast Authority. The station describes itself as a family station that covers news, society, culture, art and more, with an emphasis on happenings in Arab society in Israel.

Palestine 48 started broadcasting from Nazareth on Thursday. It has limited programming planned for he month of Ramadan, known for high ratings for television in the Arab world, after which it plans to expand its offerings.

Prime Minister Benjamin Netanyahu on Wednesday ordered the director-general of the Communications Ministry to examine all penal and administrative tools at his disposal in order to shut down the station’s broadcasts. Netanyahu, who is also the communications minister, took particular issue with the Palestinian Authority funding.

Palestine 48’s programming is being filmed in Nazareth and in other locations inside Israel, but not in fixed studios — only with mobile broadcast units. The programs are beamed directly to the Palestinian Authority’s broadcast authority’s studios in Ramallah, and from there, it is broadcast by satellite and Internet via Egypt’s “Nile-Sat.”

Because of the way it is designed and broadcasts, Palestine 48 claims, the station is not violating Israeli law. The only way to stop the broadcasts, technically speaking, would be if Israel raided and shut down the entire Palestinian Authority television apparatus in Ramallah.

The Israeli army does raid Palestinian — and even foreign — media outlets in Ramallah from time to time. In East Jerusalem, Israeli authorities even raided a Palestinian television studio mid-broadcast, detaining two journalists and a producer. 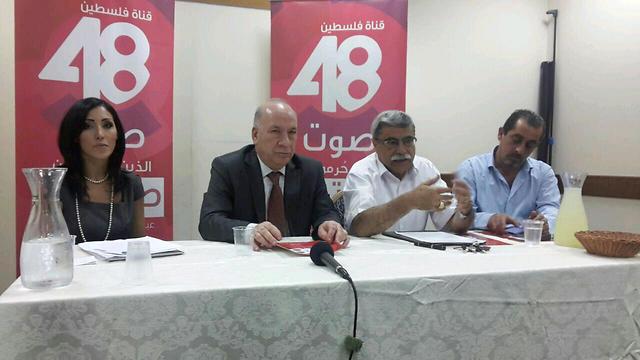 “Netanyahu’s declaration harms 20 percent of the country’s citizens,” says Hammoud, who previously worked as commentator on Israel’s Channel 2, worked as a producer for CNN and Al Jazeera, as a reporter for Al Arabiya, and who still works as a media consultant.

“I think that the [Israeli] government should actually welcome this progress by Palestinian television, which fills a void created over seven decades in which Israeli governments haven’t done what was expected of them, failing to create a platform for internal discourse and dialogue,” she added.

“Until the day arrives when there is such a platform,” Hammoud continued, “they are trying to harm [us] as part of the campaign to silence the Arab public.”

Because there is no legal basis for shutting down the station, she argues, it is the Netanyahu government itself that will ultimately be harmed by going after Palestine 48.

“It will lead to increased isolation in the international arena — surely human rights advocates around the world will view the harassment of a legitimate television station in a negative light,” Hammoud said.

Asked whether it is legitimate for the Israeli government to view the station as an attempt by the Palestinian Authority to challenge Israel’s sovereignty over its citizens, Hammoud pointed to the constitutionally protected freedom of occupation.

“Basic Law: Freedom of Occupation permits us to work inside Israel with any international body, including the Palestinian Authority, as long as we are not inciting, inciting rebellion, defaming or harming state security,” Hammoud said. “We have no intention of doing any of those things.”

The Palestinian broadcast authorities gave Palestine 48 written assurances that there would be no editorial intervention of any sort, she said. Editorial independence with the freedom criticize and plan coverage was one of the advisory board’s demands, Hammoud added.