Netanyahu publishes letter to flotilla participants in which he states there is no blockade, while at the same time declaring that Israel will prevent them from reaching Gaza. 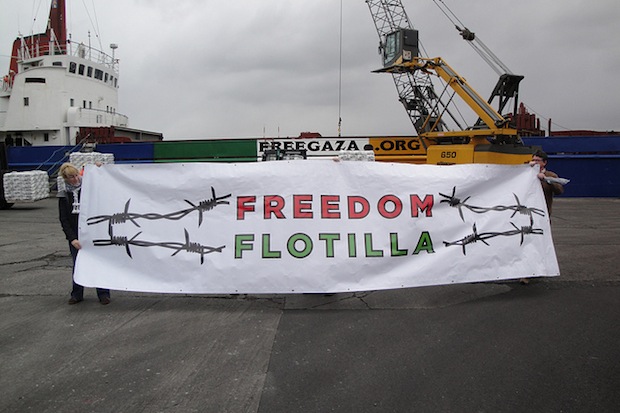 Activists hold a banner in front of the Gaza Flotilla. (photo: freegaza.org/CC BY SA 2.0)

UPDATE 7:27 A.M.: The IDF intercepted the Marianne ship early morning Monday and and began towing it to the Ashdod Port. No violence or injuries reported.

The “Freedom Flotilla III” is due to approach the Gaza coastline in a matter of hours, sometime overnight Sunday. Its declared mission is to non-violently challenge Israel’s nine-year blockade of the Strip by bringing in medical equipment and other humanitarian aid. It is not expected to actually reach Gaza, as Israel plans to stop the four boats, just as it has done in previous attempts in 2011 and the infamous Mavi Marmara in 2010, which ended with the killing of nine people on board.

Prime Minister Netanyahu published a letter Sunday night that he intends to present to all the participants, in which he sarcastically mocks those aboard (my translation):

It appears you made a wrong turn. Welcome to Israel. Maybe you intended to sail somewhere not too far from here: Syria, where the Assad regime is massacring his people daily, with the support of the lethal Iranian regime.

The letter goes on to detail all the merchandise Israel allows through into Gaza and then insists: “There is no blockade of Gaza. You are welcome to transfer humanitarian aid through Israel. We are not, however, willing to allow weapons to enter Gaza and reach terror groups, as has been done in the past via the sea.”

Netanyahu states that there is no blockade while at the same time declaring that Israel will prohibit the flotilla from reaching Gaza. It is the IDF’s naval blockade of the Strip – deemed legitimate by international law – that enables Israel to force the ships to revert to docking in the port in Ashdod. It is the blockade that allows Israel to shoot at Gaza fisherman on a regular basis. Also, what does the blockade of 1.8 million Palestinians have to do with Syria?

The 2015 flotilla is comprised of four boats, which include 48 human rights activists, journalists, artists, and political figures representing 17 countries. Dr. Bassel Ghattas, a member of Knesset with the Joint List is on board, as is Dr. Moncef Marzouki, former President of Tunisia, who came to power after the 2011 popular uprising.

Ghattas sent a letter earlier Sunday addressed to Netanyahu, calling on him to allow the flotilla to reach Gaza. His participation caused an uproar in the Knesset earlier this week, with several MKs calling for his citizenship to be revoked, among them Culture Minister Miri Regev. The Knesset will discuss the matter on Tuesday.

MK Haneen Zoabi, Ghattas’ fellow Balad party member, was on board the Marmara in 2010. Despite attempts to bring criminal charges against her, Israel’s Supreme Court ruled that she violated no laws by being on board.