The official account of Prime Minister Benjamin Netanyahu went on a roll today comparing  ISIS and Hamas. First there was a Venn diagram comparing some of the key similarities between the two groups (although inexplicably skipping some of the equally relevant ones, such as that both group use guns, sport woolly balaclavas and operate east of Sicily.)

Then, however, the prime minister stepped it up a notch by using a frame from James Foley’s murder video and a frame from Hamas’s 2012 summary execution of suspected informants, to indicate that  Hamas and ISIS are one and the same.

There’s the sheer visual inanity of comparing two strikingly different images. The two frames could not possibly be further apart in colour, composition and content, from the activity captured to the context in which the atrocities were carried out. (The Hamas execution was a horrific atrocity in its own right, of course.)

But there’s an even more sinister aspect. Since the release of the video, friends and colleagues of Foley have called on users not to watch the video – not to give ISIS the pleasure – and editors across the United States and beyond have made the commendable decision not to air or stream it, both to spare friends and family the pain, and to deny ISIS the goal of intimidation they so sadistically sought through their meticulously choreographed butchery.

Netanyahu’s people, apparently, care little for either the feelings of Foley’s loved ones or for handing ISIS a propaganda victory. Here you have it, from the horse’s mouth: the nihilistic goons from ISIS are just as representative of the people they rule as Hamas – for all its faults and its own share of atrocities, a genuine, grassroots, democratically elected movement – is of the Palestinians in Gaza.

Great way to go about it, Bibi. Also, in the original post I joked about how Netanyahu’s Venn diagram neglects to mention another crucial “shared interest” between the groups – a kink for wooly balaclavas. Luckily, Stephen Pollard and the Jewish Chronicle got Bibi’s back: 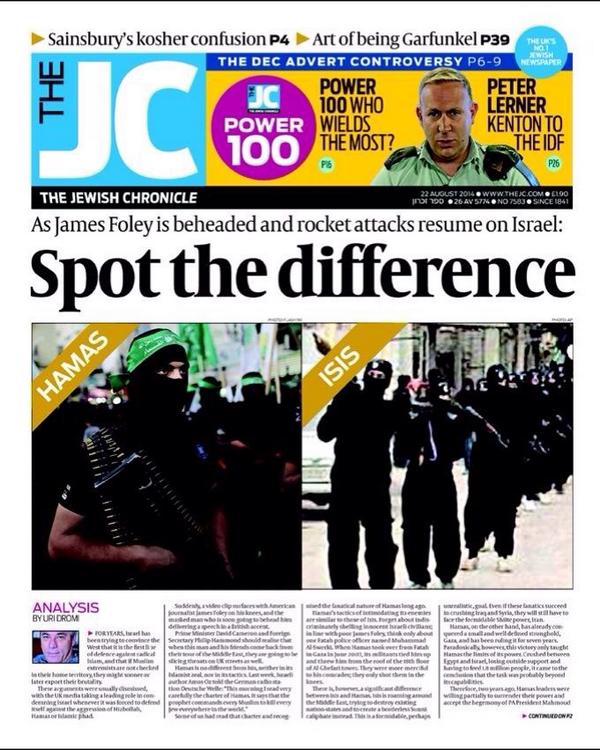