The Israeli prime minister moves closer than ever to officially declaring an end to the two-state solution. He doesn’t say it explicitly, but there are only so many eulogies a political paradigm can sustain before it expires. 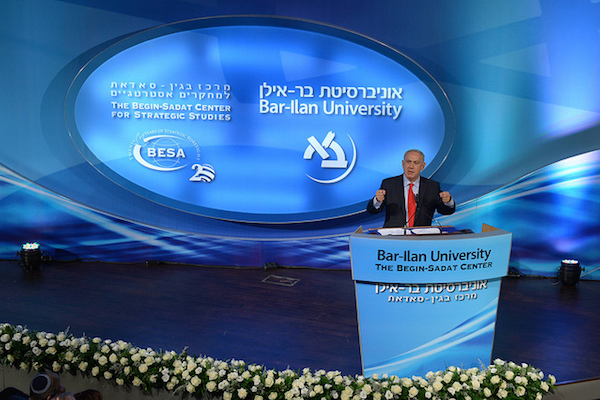 Prime Minster Benjamin Netanyahu on Sunday announced that his  commitment to a demilitarized Palestinian state alongside Israel was no longer relevant.

The statement was released by the prime minister’s Likud party following the circulation of a synagogue newsletter, which catalogued the different parties’ stances on a Palestinian state. The newsletter claimed the prime minister announced that his 2009 Bar Ilan speech, where he made the commitment, was “null and void,” and emphasized that Netanyahu’s entire political biography was “opposition to the Palestinian state.”

After initially attributing the comment to MK Tzipi Hotovely and denying she represented anyone’s position but her own, the Likud changed tack Sunday evening. “Prime Minister Benjamin Netanyahu said that in the present situation in the Middle East, any vacated territory will be immediately overtaken by radical Islam and terrorist organizations sponsored by Iran,” a party statement read. “For this reason, there will be no withdrawals and no concessions, this is simply irrelevant.”

Netanyahu has already made comments that amount to a practical rejection of a sovereign Palestinian state — most notably last summer, when he stressed that he does not see a scenario in which the IDF no longer maintains a presence in the West Bank. But between them, the two statements could amount to the first time since the Bar-Ilan speech that Netanyahu and the Likud outright rejected the very notion of Palestinian statehood. It is certainly being interpreted as a  of policy by many Israel-watchers.

These Israel-watchers are almost certainly jumping the gun.The new statement allows the prime minister considerable leeway: if he ever desires to get on board with yet another American attempt at a peace process, or to outmaneuver his rightist allies by swinging toward the center, Netanyahu could still stress the semantic difference between the comments attributed to Hotovely and those attributed to him. While Hotovely rejected the Palestinian state outright, Netanyahu’s statement on Sunday did not mention a Palestinian state, and did not say it is off the agenda. Rather, the latest Netanyahu statement says that the current regional situation makes a mockery of any plan to withdraw IDF forces from any territory. At the moment, however, his comment reads more like a reiteration of Hotovely’s statement than a modification of it, and for good reason.

(Update: Netanyahu’s Prime Minister’s Office has since denied that he made the second part of the statement released by Netanyahu’s own Likud party, but reinforced the first part of the statement. In other words, the prime minister is sticking by his explanation of why he won’t concede any territory in the West Bank, he just isn’t explicitly following through and saying he won’t do it.)

The context in which both statements should be read  is Israel’s looming general election, and Netanyahu’s increasing shift of attention away from his challengers on the center-left, Isaac Herzog and Tzipi Livni, and toward his main rival on the Right, Naftali Bennett. For the past few weeks, Netanyahu and Bennett have been locked in an increasingly tight, and occasionally petty, tug-of-war, with each trying to scrape a seat or two from the other. (Even Netanyahu’s insistence on making the Iran speech in Congress last week owes something to this tactical rivalry: his main aim in going through with the speech was not so much winning new seats as not losing any to Bennett.)

Netanyahu and Bennet are not actually polling anywhere near the same numbers — Likud consistently polls at 23-24 seats compared to Bennett’s 12-13. But both leaders vehemntly argue that one or two more seats for either party can make all the difference. Netanyahu claims that a vote for Bennett reduces the odds of a outright Likud victory and increases the chances of a Labor-led government. Bennett claims that without a strong showing for his Jewish Home party, Netanyahu will reach out to the Zionist Union and pivot Israel sharply back toward Oslo.

This argument came to a head late last week with the release of old negotiating documents allegedly demonstrating Netanyahu’s readiness to agree to pre-’67 borders with mutually agreed land swaps. While the Israeli public did not seem immediately impressed — the negotiations, after all, ended in a failure, and what is an old piece of paper next to Netanyahu’s emphatic and well-publicized intransigence on the Palestinian front? — Bennett went all in.

On Friday, Bennett published a passionate Facebook post, saying that “the document is real,” and that a coalition with Labor would put Israel was on the brink of a disastrous withdrawal from the West Bank. Only a strong Jewish Home can pull it from the brink. Only the Jewish Home, he concluded, has explicitly opposed any kind of a Palestinian state. Netanyahu’s decision to go with, rather than against, Hotovely’s comments made to an obscure synagogue newsletter, reflects his fear of being decisively outflanked by Bennet just over a week before the elections. Whatever else, Bennett’s monopoly on open opposition to Palestinian statehood has been broken.

All this should be taken with a pinch of salt: Labor has been in most right-wing coalitions since 2000, and has never affected the peace process one iota. In fact, it served as fig leaf for Ariel Sharon’s dismantlement of the Oslo accords’ meager accomplishments. The current incarnation of Labor, the Zionist Camp, does not even pretend to have the peace process on its agenda, and Herzog is taking great pains to sound as similar to Netanyahu as possible. A pivot toward partition is as unlikely in such a coalition as it would be in another Netanyahu-Bennet government, which is also a very reasonable scenario.

Moreover, in every conceivable practical sense, the two-state solution is already dead and rotting, with Netanyahu having driven whatever nails remained into its coffin over the last five years of his premiership. The solution exists solely as an article of faith, which is why an official declaration of its demise by one or more parties to the conflict can seem like a big deal.

In a simpler world, Netanyahu’s statement would be answered with Mahmoud Abbas slamming the proverbial keys on the table and inviting Netanyahu to come up with an alternative. In reality, the only thing that sustains the incumbent Palestinian leadership is the notion that an independent Palestinian state is still possible. So barring a spontaneous implosion (triggered, for instance, by Israel overplaying its hand in withholding Palestinian tax money), the Palestinian Authority will continue hankering for a two-state solution long after the Israeli leadership has walked away.

So even if Netanyahu was as unequivocal as he purports to be, his comments are not likely to make a great difference in the short term.

What Sunday’s statement can do, however, is to feed the incremental but accelerating process of airing alternatives to partition. If Netanyahu does not get on board with the Nth American negotiation proposal there will, over time, be more and more space for propositions on what the Israeli endgame in the Occupied Territories should be, sans two-state solution.

It’s not very likely such a proposal will come from Netanyahu himself — he, after all, has made it his policy to operate on the basis of the status quo, not constraining himself with any long-term commitments. Still, his statement on Sunday, especially if taken at face value by a sufficient number of people, can help drive Israeli political discourse further toward not only ignoring the two state paradigm, but actually replacing it.