If Israel is not willing to relinquish military control over the West Bank, then it is saying that there can be no two-state solution. 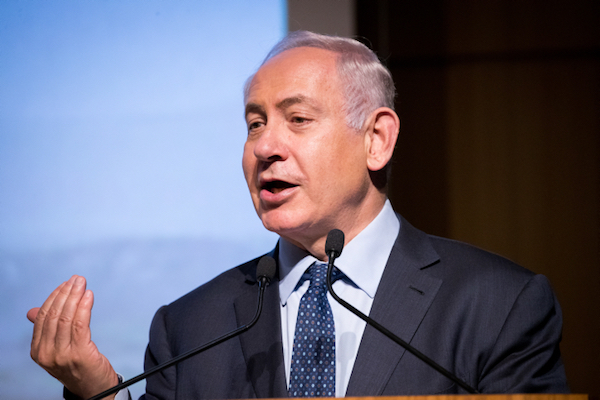 Prime Minister Benjamin Netanyahu speaks during a Knesset ceremony marking the 50th anniversary of the 1967 Six Day War and the start of settlement in the West Bank, June 6, 2017. (Yonatan Sindel/Flash90)

Benjamin Netanyahu last week promised that Israel will never relinquish security control over the West Bank, even as part of a two-state peace deal, which is to say that the Israeli army will occupy the Palestinian territory forever.

“[I]n any agreement, and even without an agreement, we will maintain security control over the entire territory west of the Jordan River,” the prime minister said at an event marking 50 years since Israel conquered the West Bank and Gaza Strip, putting them under military rule, otherwise known as the occupation.

Without Palestinian national self-determination and statehood, the Palestinian people are left living as subjects under a military regime with no civil rights, no suffrage.

But have no illusions, this is far from the first time that Netanyahu made clear that he has no intention of ever ending the occupation. The world has heard him say it time and again, year after year.

Yet time and again, the world pretends like the Israeli prime minister is a partner for peace, that if only the Palestinians could be convinced to make one more concession, peace would be within reach.

The truth is that Netanyahu’s grasp on power is predicated on his record of stability, which means maintaining the status quo — occupation and all. For the most part, Israelis are in one of most comfortable positions they’ve ever been in vis-à-vis the Palestinians. There is no urgency to end the occupation. The perceived risk in relinquishing territory and “security control” to the Palestinians far outweighs any perceived benefit.

What Netanyahu said this week, however, is not only that he doesn’t think it wise to take those risks in the foreseeable future. He does not ever intend to ever take the risks necessary to achieve peace.

The question then becomes: will the world continue to ignore the Israeli leadership’s intransigence toward the two-state solution? And if it doesn’t, how will the international community treat an Israeli state that is willing to military occupy another people indefinitely? If 50 years hasn’t been too long, how long is too long?