The alliance between Palestinian citizens of Israel and the Jewish left has historically been viewed as a threat to the rule of the right. That’s why Netanyahu is doing everything he can to undermine it. 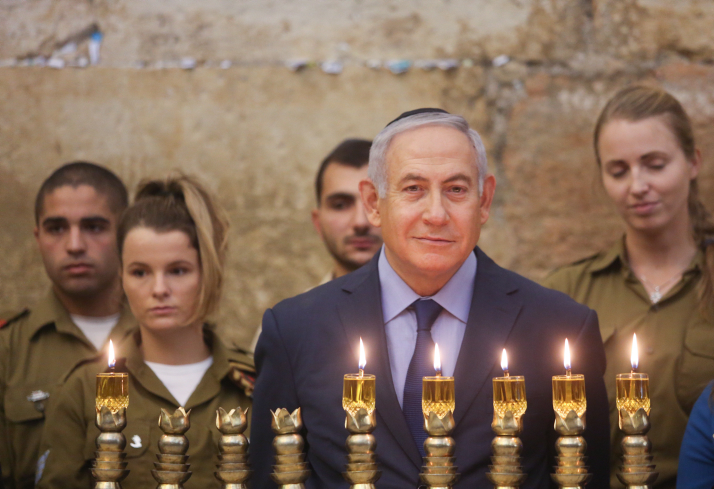 Israeli Prime Minister Benjamin Netanyahu lights the ‘Hanukkia’ on the First night of the Jewish holiday of Hanukkah at the Western Wall in Jerusalem, December 06, 2018. (Marc Israel Sellem/GPO)

The Israeli right knows exactly how to harm the left: by making its alliance with Palestinian citizens not only impossible but illegitimate, thus drawing away its power. The Jewish left, for its part, has historically done enough to undermine this alliance. But recent events have created new possibilities — and that’s why the right is coming out with guns blazing.

This dynamic is currently playing out in Haifa, where in the recent municipal elections, newly-elected Mayor Einat Kalisch-Rotem appointed Raja Zaatry, a veteran activist from the Jewish-Arab Hadash party, to be her deputy. Kalisch-Rotem, who defeated incumbent Yona Yahav from the Labor Party, was elected with the support of the left and the ultra-Orthodox community. In early December, she announced her coalition, which excluded the right-wing Likud, and included the Haredi party, Hadash, and Meretz.

Then, on Dec. 4, Makor Rishon, the newspaper of Israel’s religious-nationalist community, published an article on Zaatry, which painted him as a supporter of BDS and a Hezbollah sympathizer who previously compared Israel to ISIS.

The furor came almost immediately. Interior Minister Aryeh Deri demanded Kalisch-Rotem walk back from her decision, while Prime Minister Netanyahu opened his weekly cabinet meeting by discussing Zaatry. Yair Lapid, who in the eyes of many Israelis has come to represent an opposition to the Netanyahu government, decried Zaatry’s appointment on Facebook.

On Wednesday afternoon, Netanyahu even phoned the mayor in an attempt to persuade her to change her mind. Kalisch-Rotem, however, made clear to him that her coalition agreement would remain unchanged. The controversy might appear like a tempest in a teapot, but it is evidently enough to concern both Netanyahu and Lapid. Kalisch-Rotem’s coalition, it turns out, is a threat to the right’s rule in Israel.

The majority of Jewish Israelis today fall somewhere on the center-left and center-right of the political spectrum, far from the historically divisive issues of war and peace. They vote according to a different set of parameters, such as professionalism, experience, issues touching on religion and state, and other seemingly simpler civil and social issues.

The new crop of politicians, including Lapid, Zionist Union Chairman Avi Gabbay, and Kulanu leader Moshe Kahlon, have internalized this change; they understand Jewish Israeli society well enough to know that the majority of young people are somewhere between left-wing Meretz’s Tamar Zandberg and right-wing Justice Minister Ayelet Shaked — not because of the occupation and the settlements, but for other reasons entirely. 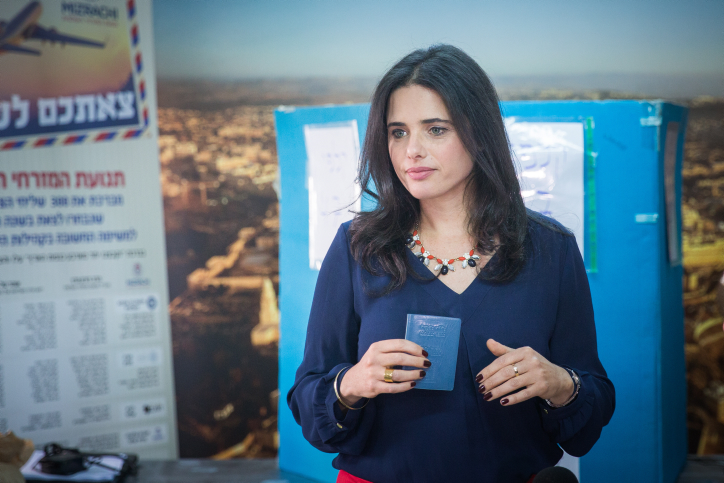 Justice Minister Ayelet Shaked arrives to cast her vote during the party’s preliminary elections, in Jerusalem, on April 27, 2017. (Yonatan Sindel/Flash90)

The left (justifiably) tends to see anyone who isn’t clearly on their ideological team as a right winger, while the right (unjustifiably) views anything that isn’t right wing as left. These categories were previously helpful in explaining Israeli politics, but today they only hinder our understanding. It is true that the left-right divide is still important in Israel, but it is being pushed to the sidelines. The public discussion has shifted to focus on politicians who want everyone’s support — except for those on the ideological extremes.

Today, the goal of both the right and the left is to influence the center: the settlers will try to force Likud to pass laws that benefit them, while the left will force the Zionist Union to openly oppose the expulsion of refugees or cause Netanyahu to think twice before a military operation in Gaza.

The Jewish left, on the other hand, has the Arab “bloc,” yet it has never truly figured out exactly what to make of it. Despite a history of animosity, the alliance has grown tighter ever since the left decided to prioritize ending the occupation. The Arab parties are varied in terms of their world views and interests, but their persecution by the right-wing establishment has forced them to become bedfellows with one another, along with the Jewish left — often to its chagrin. 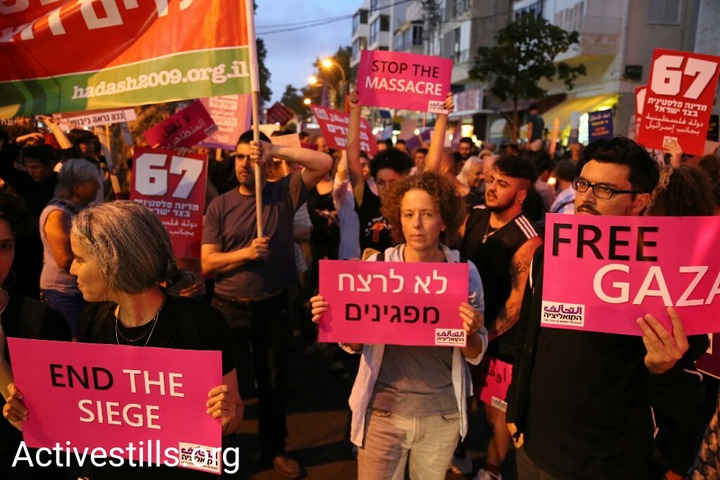 In fact, it is far more accurate to say that the Jewish left-Arab alliance is built on the possibility of partnership, rather than actual cooperation. The leaders of the Jewish left have made tremendous efforts to sabotage ties with Palestinian citizens. And yet, despite the difficulties, it is the only chance the left has.

Without Palestinians, the left shrivels

The only chance the Jewish left has to be relevant in Israel is through complete Jewish-Arab partnership. It must present a common vision for a dignified life for both Israeli Jews and Palestinians, out of respect for their cultures, without endless bloodshed or one group trying to subjugate the other. The right can continue to hope to break the Palestinians, while we continue to strive for a shared life with dignity.

The only way the right can stop this alliance, which has the power to turn the Israeli left into a full-fledged political power, with 40 percent of Israeli citizens, is to attack the legitimacy of Palestinian elected officials. If supporting Haneen Zoabi is portrayed as beyond the pale, the left shrinks. This is why Liberman, Netanyahu, and others are busy with overtly racist attacks on Israel’s Palestinian citizens.

Netanyahu, who views himself as an enlightened, right-wing liberal, had for years stopped short of making blatantly racist and discriminatory remarks in public. His preference, like that of every prime minister before him, was to promote discriminatory policies while conveying a message of equality to the outside world. This trick originally belonged to Mapai, particularly vis-a-vis Israel’s Declaration of Independence: near-equality on the page, zero equality in reality. Over the past few years, Netanyahu removed the veneer, and time after time has directed his attacks at Palestinian citizens. 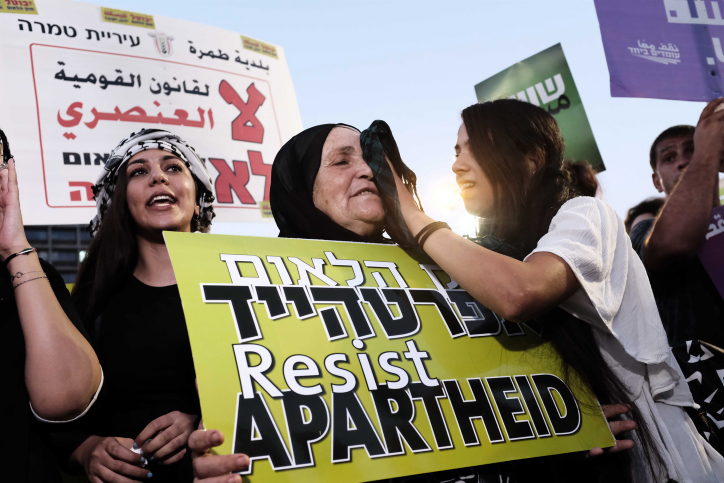 Netanyahu’s considerations are purely political: without the Arabs, the left shrivels up, both morally and politically. In his eyes, the passing of the Jewish Nation-State Law exposes his opponents’ Achilles heel: the heads of the Jewish left were too busy arguing over whether to show up to protest with Palestinian citizens, and once they decided not to partner up with the Palestinian left, they turned themselves into an permanent minority and exposed the hypocrisy of the ideology they claim to support.

The Zaatry controversy is another classic example of the right’s cynicism. Netanyahu doesn’t care about the deputy mayor of Haifa — he wants to make headlines by showing Israelis that the Labor Party backs Hadash. He also wants to avoid setting a precedent: if he remains silent on Zaatry, he may end up with similar Jewish-Arab partnerships in other cities — including Tel Aviv. Perhaps even in the Knesset.

The left cannot remain silent. It must speak clearly and defiantly to tell Netanyahu: the future you are so afraid of is the future we want to see.

Eli Bitan is a blogger for Local Call, where this article was first published in Hebrew. Read it here.