The prime minister’s Election Day warning that ‘Arabs are coming out in droves to the polls’ was the culmination of months of focus groups and a clear-eyed strategy from Likud operatives, a new Channel 2 report reveals. 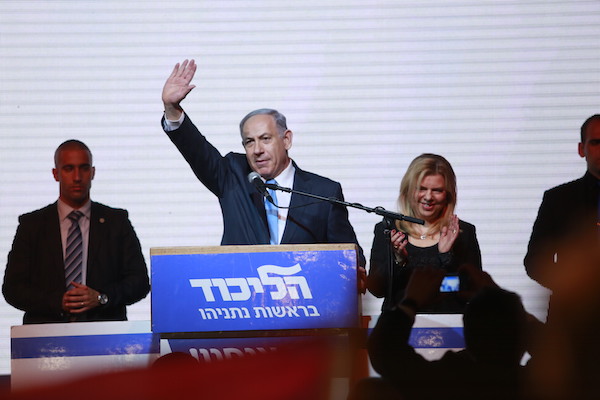 Controversial comments by Israeli Prime Minister Benjamin Netanyahu about heavy voter turnout in Israel’s Arab sector were not one-time mistakes but part of a broader strategy executed by the Likud campaign, a report broadcast Monday by Israel’s Channel 2 News demonstrated.

Netanyahu was heavily criticized, at home and abroad, for his last-minute plea for right-wing voters to support him at the polls in order to block Arab electoral strength. “Arab voters are coming out in droves to the polls,” Netanyahu declared in a video message broadcast on Facebook. “Left-wing organizations are busing them out.”

The comment drew a rebuke from the Obama administration and Netanyahu expressed his “regret” in an apology to Israel’s Arab community after the election, casting the race-baiting remark as a simple lapse in judgment during a heated campaign.

But the new report by Amit Segal, a well-known religious and right-wing political commentator, casts a sharp and unflattering light on the last days of Prime Minister Benjamin Netanyahu’s campaign for re-election in 2015.

Segal describes a process, including polling and focus groups, which had shown the Likud that dealing with economic matters, or going after Bennett was not a winning strategy. Rather, their research had suggested that Likud does best when voters are afraid of the consequences of a left-wing victory and that the issue of security, being tough with relation to the conflict with the Palestinians, was Netanyahu’s greatest strength. Fear, in other words, was the best way for Likud to get votes. 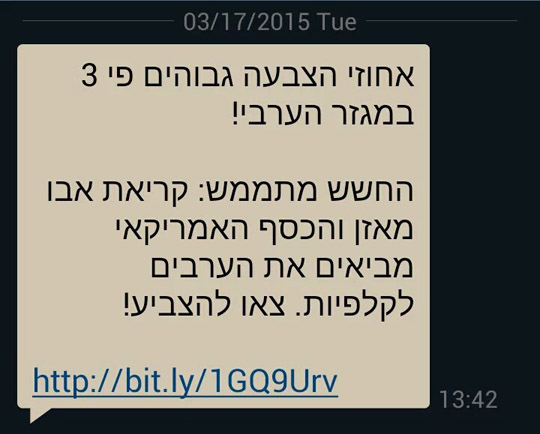 A text message sent out to millions of people on Election Day: “Voter turnout triples in the Arab sector! The fear is coming true: Abu Mazen’s calls and American money are bringing the Arabs to the polls. Go vote!”

For much of the campaign, Netanyahu and other leaders did not fully heed this advice. While they did focus on security, they did so in a way that looked more beyond the borders than within the country. Even when Netanyahu was using fear in his campaign, it was much more focused on external threats like ISIL, like in the ad reported on in this piece, casting Israel’s left wing and Arab voters as too weak to oppose such forces.

They also tried to engage with Bennett from the right and on the economy from the center. It was only on the last day that they employed their anti-Left and anti-Arab strategy to its fullest. As Segal writes, “Focus group results from three months earlier materialized at the end.”

Those focus groups led Likud campaigners to undertake a massive campaign of fear on Election Day. The fear of Arabs, and by implication, the involvement of Palestinian citizens of Israel in a government led by the Zionist Union, was used to drive right-wing voters to the polls and ensure that they would vote Likud rather than one of the other right-wing parties.

“At 11 a.m. on Election Day, it dawned on the Likud that they were trailing the Zionist Union,” Segal reports. “That was the signal to begin the bombardment. On Election Day alone, some five million text messages were sent…It cost eight million shekels more than they had planned, but to the Likud it was worth every penny.”

“On that last day,” Segal continued, “all the messages and status updates were on one subject. It was not about [Isaac] Herzog or [Jewish Home Leader Naftali] Bennett, but only about Arabs and the specter of the power of the Joint List (a mostly Arab coalition of parties).”

Segal reports that the messages sent included: “Voter turnout triples in the Arab sector,” “Arab residents of Be’ersheva vote en masse. Don’t let them appoint the ministers in the next government,” “Commentator Ehud Ya’ari on Channel 2 just now: Hamas calls on Arabs in Israel to get out and vote.”

At 8:00 p.m. that night, Israeli television projected the final exit polls. But, Segal reports, “In the next two hours between the end of projections and the actual closing of polls, a really dramatic thing happened: in the previous election, about 230,000 people voted between the hours of 8 and 10 p.m. In 2015, however, a huge turnout of almost 600,000 people flooded the polls—the vast majority, Likud voters.”

It’s clear from this report that, far from a simple, heat of the moment mistake, Netanyahu’s racist rhetoric was part of a strategy that was planned well in advance, one that was activated when the prime minister feared his re-election was slipping away.

Mitchell Plitnick is the vice president of the Foundation for Middle East Peace. Follow him on Twitter at @MJPlitnick.